The Canadian Space Agency (CSA) has revealed that a piece of space debris punctured the Canadarm2 robotic arm on the International Space Station (ISS).

The second-generation robotic arm, officially titled the Space Station Remote Manipulator System (SSRMS), is still operational but has a punctured thermal blanket and the boom is damaged underneath.

While the utmost precautions are taken to reduce the potential for collisions with the ISS, impacts with tiny objects do occur. One such hit was noticed recently during a routine inspection of Canadarm2 on May 12.

NASA and the CSA collaborated to photograph the damage and assess its impact. Thankfully, they've deemed the robot arm’s performance is unaffected. 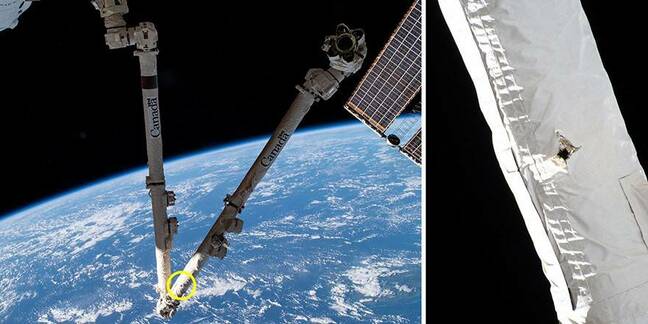 The Ding in Canadarm2. Image: CSA/NASA.
Click to enlarge

The Canadarm2 is a multi-jointed titanium robotic arm used to move objects like cargo shuttles outside the ISS, and to perform station maintenance. It has been attached to the ISS since April 2001.

Canadarm2 will continue with its duties, which include a planned operation to hoist Dextre, another Canadian remote manipulator, into position so it can replace a faulty power switchbox.

A strike to the ISS by space debris seems unlucky but almost inevitable as astroboffins currently track over 23,000 pieces of low Earth orbit junk that is softball sized or larger. However, the offending item that hit the robotic arm was too small to be tracked.

US military commanders have recently called for a framework for a rules-based order in space, and did so after the uncontrolled descent and Indian Ocean crash of a Chinese Long March 5B booster stage in May 2021.

Jack Wright Nelson, a space law researcher from the National University of Singapore Faculty of Law told The Register:

The hole in Canadarm2 is minuscule compared to the hole in the international legal regime concerning space debris.

This is because space objects, and their components remain under the jurisdiction and control of their State of Registry. So to remove a dead satellite – or any part of it – from orbit, you need to find this State and get their permission. Depending on the State and the purpose of the satellite, this permission may not be forthcoming.

He referred to the prospects for comprehensive international space debris regulation as "dim" and stated:

The irony is that space will become wholly inaccessible to all of us if we do not resolve the space debris problem.