Down continues to be the new up

NortonLifeLock, the company that offers the consumer products Broadcom didn’t want when it bought Symantec, has started to offer Ethereum mining as a feature of its Norton 360 security suite.

The antivirus maker's pitch for the product rests on the argument that casual cryptocurrency miners can't or don’t take security seriously – perhaps by running iffy code that might just steal their money – and so here's a trusted tool to safely craft coins for them.

“For years, many coinminers have had to take risks in their quest for cryptocurrency, disabling their security in order to run coinmining and allowing unvetted code on their machines that could be skimming from their earnings or even planting ransomware,” NortonLifeLock asserted this week.

Worse still, NortonLifeLock claimed, miners will likely store their digital wallets, containing their precious coins, on hard drives that can fail. The company says, funnily enough, a better approach is to have its computer security software mine Ethereum while it runs, then store the results in the Norton cloud.

The feature has been added to select customers’ installations, and “is expected to become available to all Norton 360 customers in the coming weeks.”

Where to start with this one? One thing that stands out is NortonLifeLock’s assertion that hard drive failure is a risk to your crypto wallet, an oddity given that hard drives' mean-time-between-failures now stretches into the millions of hours, at least according to their manufacturers.

The announcement also has a few notable omissions. While there is a mention of using idling PCs to make some coin, NortonLifeLock hasn’t said anything about performance impacts nor how quickly users could expect to mine a coin.

The announcement also contains a footnote about certain hardware being required but doesn’t name that hardware. A supplied screenshot depicts use of a “primary” GPU. Plenty of PCs make do with integrated graphics processors, and it is unclear if NortonLifeLock proposes to use those, and what would happen if a customer started to do something that wants access to either the baked-in graphics chipset or any discrete GPUs. It’s also unclear if a dedicated GPU will be necessary. 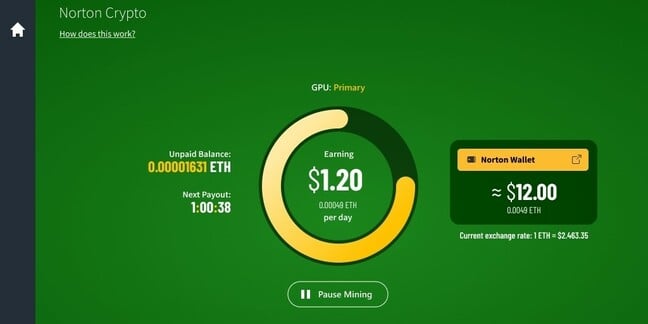 Nor has NortonLifeLock said how its “Norton Crypto” wallets will operate, or how users will be able to use the wallets to convert coins to cash or ultimately buy stuff with Ethereum. There’s also no mention of what NortonLifeLock stands to gain by managing a fleet of customer PCs all mining cryptocash. The Register can imagine NortonLifeLock could end up sitting on a stack of ETH before its customers cash out.

The stuff about miners being insecure may well be right, but also feels a bit fuzzy as it is not hard to find Ethereum mining apps that run on PCs.

But as a marketing ploy, this product could be a winner. Windows Defender has commoditized personal security software and made purchases of third-party products feel unnecessary. NortonLifeLock is now dangling a product that promises better security and that it might eventually pay for itself. And not just pay for itself but also pay handsomely in the long run: the value of Ethereum has risen almost 1,000 percent in the past twelve months, and more than 10 per cent in the past 24 hours alone. ®

FTX's Sam Bankman-Fried charged with fraud by just about everyone