How many remote controls do you really need? Answer: about a bowl-ful

I don’t care if the football’s on, we’ll have to watch whatever the TV wants us to

Something for the Weekend, Sir? My television wants me dead. It’s doing this by playing dead itself. Only one of us will get out of this alive.

The remote control isn’t working, you see. And now the TV set is having a private little chuckle at my expense behind its resolutely blank screen as I grope blindly behind the fascia edges hoping to locate an elusive power button. Why can’t I find the bastard thing? Surely there must be a…? Or did I dream it? Perhaps there never was one?

This is all part of the TV’s long-term plan to make me doubt my own problem-solving abilities. It wants me to convince myself I’m an old duffer who can’t even remember how to switch on a telly, old-school fashion. Paranoia, madness and ultimately self-destruction are sure to follow.

In short, my television is gaslighting me. I knew something was up when it got me to amend my life insurance in its favour.

"Try another one," suggests Mme D, gesturing towards the bowl.

We keep our living-room remote control handsets in a bowl. A lifetime ago, when we owned maybe just one or two remote controls, they would behave themselves while lying side by side on the coffee table. But things got out of hand as additional handsets joined them over the years. They began partying, staying out all night, coming home drunk, throwing up on the doorstep – the usual. So we consigned them to a bowl. A bit like swingers do with their car keys at a party but lonelier.

Keeping all your remote controls in a bowl only works if you take care to keep the really important ones not in the bowl. Otherwise, they get mixed up and then you pick out the wrong one, leaving you jabbing away at an unresponsive rubber key while pointing at the wrong device. Like I have been doing for the last five minutes.

The problem is that we had a bit of a tidy-up today, and all the living-room remotes got returned to the bowl at once. I reached for the first that came to hand and it just happened to be the wrong one. Or maybe it was the right one but I was holding it the wrong way around. I’m not such a duffer that I would complain that "things aren’t what they used to be", but remote controls are certainly not as asymmetric as they used to be.

Here is our remote control bowl: 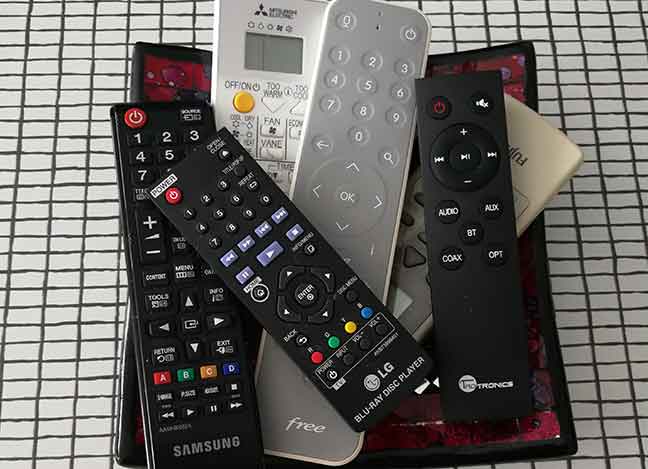 Remote controls in a bowl: and these are just those for the living room

We probably need to upgrade. I was thinking maybe a paella serving bowl would do the trick. Or a Montessori-style compartmentalised box to keep different types of device separate. I draw a line at labelling them, though.

I pick up another remote control, point it at the telly and press the ugly red button near the front. I am punched in the ear by the swift-opening CD tray of my hi-fi system, which sits on the bookshelf right next to the sofa where I’m sitting.

Well, that’s good to know at least. Let’s forget about TV and listen to some music instead. Music is one of my favourite things – along with brown paper parcels, whiskers on kittens, and Teutonic gravel-garglers who can turn charming Sound of Music hits into funeral-worthy gloom-stompers.

Ah, Laibach. I wonder whatever did happen to his promised collaboration with the British avant-gardist Thinkofengland?

I may never know as I can’t get any sound from the hi-fi. And therein lies the key contributory factor in my erroneous choices of remote control: there are simply too many of them. Now that the CD player is working, I need to find a completely separate remote to operate the amplifier and speakers.

In fact, every electrical device in the room seems to require its own custom-programmed handset that its manufacturer deemed necessary to be utterly incompatible with everyone else’s. In a world where smartphone manufacturers feel confident enough to dispense with earphones or even a USB charger in the box because they are standard items, television manufacturers have been unable to agree over the course of 65 years on a common ISO standard for an infra-red code that means "switch my fucking television on".

Sure I could buy one of those combined remotes that take over the actions of individual remotes. We’ve all tried that… and what happens? You spend the best part of a day pointing handsets at each other and reprogramming thousands of shitty little buttons, only to find that you still don’t have enough buttons on the combined handset to do everything the old ones did – partly because you need eight separate buttons just for turning the fucking television on. This means you have to hang on to the old handsets as well as the new combined one. So instead of dispensing with multiple remote controls, you’ve actually succeeded in adding yet another one to the bowl.

I try another remote control. Nothing. And another. A blast of chilled breeze wafts over me from the aircon.

Hang on, maybe it’s not one of these. Infra-red? What was I thinking of! Hey, grandad, get to the hip, the speakers probably jive on Bluetooth, daddio. There’s definitely a Bluetooth remote in the bowl, probably the little one with just a few buttons. I press one of them.

Ambient music can now be heard tinkling from upstairs. It’s coming from the portable speaker I keep in the office because it’s too bulky and heavy to move anywhere else. Not Bluetooth, then. And definitely not Laibach. I press the button on the remote again but the distant speaker does not turn off. If anything, it has grown louder.

I do remember the sales blurb singing the praises of an IoT-connected app I could use as an alternative to control bits of the hi-fi. I find it on Google Play, download it and install it. Then I set up a username and password for it. Oops, it needs at least one numeral. Ah, now it wants an uppercase. Aaaaand now it insists on a special character. OK, not that special, apparently.

Half an hour later, after three email confirmations and 20 passcodes randomly delivered in text messages that, like buses, don’t turn up and then arrive seven at once, I finally succeed in creating my encrypted user credentials with 2FA… in order to let me switch on my hi-fi speakers.

Nope. Nope. Nope… so it goes on, as I try to connect one after the other. Out of the blue, my television screen lights up. So does the soundbar but then it might have been on all this time for all I know. Fine, we’ll watch TV after all.

I call Mme D over and we settle down to watch whatever is currently showing because neither of us know what device to use for changing the channel or how to hide the Welsh subtitles that have curiously enabled themselves.

There’s a knock at the door. It’s our neighbour. She says she’s getting strange noises from her television, rather akin to the sounds of a concrete mixer. Through her open front door, I detect the faint gravelly tones of Laibach grunting away in German.

Oh, give me one remote control. One standard. One telly. One vision.

Alistair Dabbs is a freelance technology tart, juggling tech journalism, training and digital publishing. He is aware that he has written about this topic before. More than once in fact. And he warns readers he will do so again and again until you find the right remote control to turn him back off. More at Autosave is for Wimps and @alidabbs.