Updated A not-inconsiderable chunk of the World Wide Web, including news sites, social networks, developer sites, and even the UK government's primary portal, has been knocked offline by an apparent outage at edge cloud specialist Fastly – though your indefatigable The Register remains aloft.

The root cause, according to security expert Mikko Hypponen and others in the field: Fastly, an edge-centric cloud computing specialist founded in 2011 by former Wikia chief technical officer Artur Bergman, which is apparently having a bad start to the day. 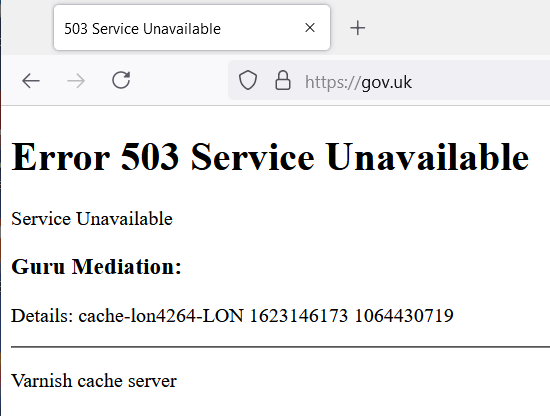 Boasting 1,000 employees and an annual revenue of $200m, Fastly is responsible for optimising websites – primarily through its content delivery network (CDN), which appears to have been at the heart of today's outage.

Fastly's status page confirmed "potential impact to performance with our CDN service" starting at 09:58 UTC today – which is a somewhat understated way of putting the glitch. At the time of writing, investigations were under way with no timescale yet provided for a fix.

A spokesperson for Fastly confirmed to The Register that the company is "aware of the issue and can confirm it's global," and that "all hands are on deck and working hard to resolve." ®

Fastly updated its status at 10:44 UTC to say the issue had been "identified and a fix is being implemented."

Fastly has applied the fix, and told customers at 11:57 UK time (10:57 UTC) they "may experience increased origin load as global services return."

To our readers affected, we offer a virtual beer or colddrink. We hope the rest of this day goes better.