'When a search engine does the censorship instead of its job, it's not reliable anymore'

Version 8.0 of the popular Windows editor Notepad++ has arrived with new features including Dark Mode, a native build for ARM64, and optional new toolbar icons using the Fluent UI.

Despite the seemingly unstoppable rise of Visual Studio Code, there is still a place for a fast and capable native code editor. Notepad++ is coded with C++ and based on the Scintilla editor component.

Notepad++ is open source under the GPL 3 (or later) licence. It has never been the prettiest of editors, but has lots of nice features like syntax highlighting and code completion for a huge range of languages, a range of character encodings and the ability to convert between them, understanding of Unix-style line endings, ability to collapse sections of text, macro and plugin support, and more.

The main author, Don Ho, has now released version 8, the first major version upgrade since Release 7 in September 2016. The big new feature is Dark Mode, independent of system settings, which many developers find reduces eye strain as well as saving a smidgen of power consumption. Another change is that Notepad++ now also includes Microsoft's Fluent UI System Icons, which are particularly suitable for Dark Mode. The old icons are still there and used by default. A further innovation is Distraction Free Mode which is a full-screen view that hides all icons and menus as well as the Windows taskbar. 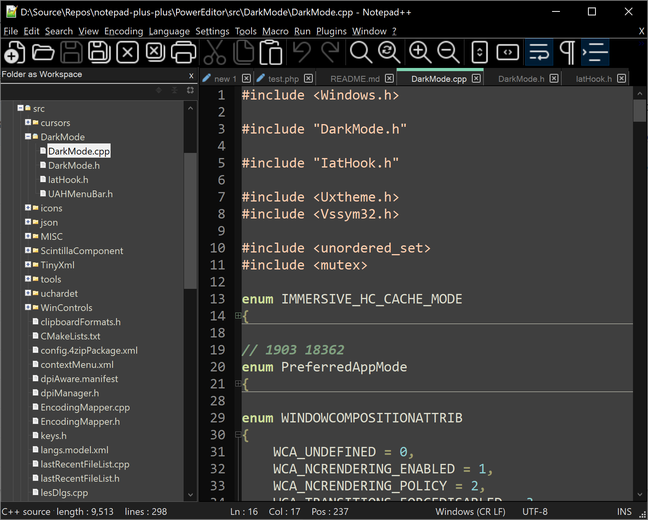 A new ARM64 build is provided, as requested in 2018 by a Microsoft software engineer (though it was already possible to build version 7.x from source for ARM64). Other new features include an option to reverse the line order, an option not to move to the next occurrence when replacing text, function list parsing for Ada, Fortran and Haskell, and various bug fixes.

Notepad++ includes a right-click option to "Search on internet"; handy for those tapping into the web's expansive though sometimes unreliable resources for stuck coders, and there is a choice of search engines available in preferences.

These used to include Microsoft's Bing, but no longer. "When a search engine does the censorship instead of its job, the search result loses its quality and it's not reliable anymore," said Ho, no doubt referencing this incident. DuckDuckGo, which makes use of Bing, is still included.

Despite its popularity (GitHub shows 13,400 stars and 3,200 forks), Notepad++ isn't the most polished of editors, and version 8 does not change that.

"Dark mode missed a few spots," as a user has already observed, with the settings dialog still decidedly black on white. Dark mode also looks messy with some file types, such as Markdown. That said, Notepad++ has lost none of its speed and it is possible to open a file in Notepad++, copy some text, and close it again, before VS Code has wound itself up, especially if burdened with many extensions. These are welcome improvements to a handy utility. ®