An anti-drone system that sneezes targets to death? Would that be a DARPA project? You betcha

The United States' somewhat exuberant past foreign policy decisions mean that American troops frequently find themselves driving slowly through densely populated cities full of people who would strongly prefer they were not there.

This difficult situation ensures any potential enemy has numerous opportunities for attack, meaning equipment and tactics of varying usefulness have been developed to prevent this from happening, or at least lessen the chances of success.

But the development of cheap, capable, commercially available drones created a new problem: opponents could use these drones for reconnaissance or to attack convoys with explosive devices, and the defending troops would not be able to do much about it, even if they could see it coming.

This is because in a city, any bullets, shells or other projectiles that miss the target are almost guaranteed to cause havoc somewhere else. And given that drones are small, quick and unpredictable, you'd certainly miss a lot before you managed to hit one. As El Reg's Gareth Corfield eloquently explained during The Reg's coverage of the Gatwick drone incursions in 2018:

The most obvious solution is to shoot down the drones using a rifle or a shotgun. Here the problem is simple: a rifle bullet fired upwards travels a very long way if it doesn't hit its target, or passes through it. If you're using a .308"/7.62mm rifle pointed upwards at 70 degrees, the dangerous zone in front of it where the bullet could land is up to 2.5 miles or four kilometres long.

In an urban environment, having bullets landing randomly in an area that big is obviously far from ideal for the people living there.

So what to do? How can such airborne threats be neutralised without spraying the whole city with small-arms fire?

The agency's famously tangentially minded boffins reasoned that while drones are now potentially capable of creating a lot of damage, they weren't much cop at taking it back. To knock one out, you wouldn't have to destroy it, you just had to stop the rotors turning, which isn't actually that hard.

Thus, they created a programme called Mobile Force Protection. This includes a handy Humvee-mounted box that launches friendly drones and guides them toward the enemy buzzbot with "a newly-developed X band radar that automatically senses and identifies unmanned aerial system threats." 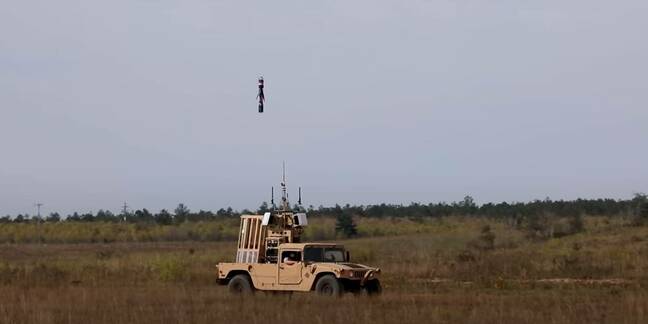 Then, when it gets close enough: "The primary drone negation mechanism shoots strong, stringy streamers from reusable interceptors that foul propellers causing loss of propulsion."

Or, in common parlance, it sneezes a big glob of pink silly-string snot all over it, which gunges up the rotors and causes the stunned enemy hobbycopter to tumble to the ground.

Magnificent. Makes you want to stand to attention and sing "The Star-Spangled Banner." ®