China’s crackdown on cryptocurrencies has reached a new crescendo, with the nation’s Ministry of Public Security on Wednesday proclaiming it has arrested over 1000 people and shut down 170 gangs that provided crypto-linked money-laundering services.

The Ministry’s announcement says it detected, and dismantled, gangs that provided money-laundering services to criminal organisations.

Some of those organisations allegedly laundered ill-gotten gains from other ventures by building coin-mining farms.

Others are what China calls “two cards” scammers, who funnel their ill-gotten gains to acquire phone cards that are shipped outside China, then use call credit stored in the cards to make scam calls back into the Middle Kingdom. The proceeds of those scams are laundered using cryptocurrencies.

The Ministry therefore asserted that its actions protected China’s citizens, phone networks, and the stability of its financial system, and celebrated the raids by posting the image below to its Weibo account. 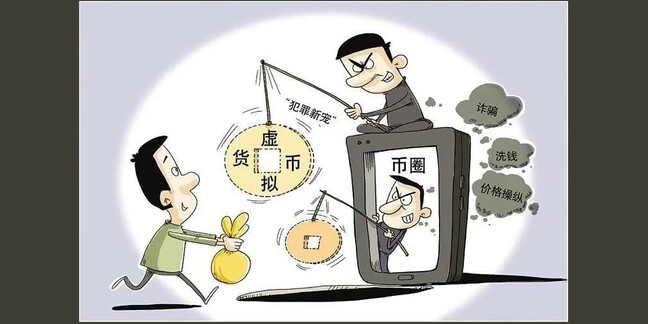 The Chinese Ministry of Public Security’s view of phone and crypto crooks.
Click to enlarge

#Crypto exchanges @binance, @HuobiGlobal, @OKEx now blocked on #China social media in Chinese and English. Weibo searches return, “according to the related laws and regulations, the results of this search are not available.” For Baidu, “sorry, no relevant results found”. #bitcoin pic.twitter.com/czkiV3zzCZ

China’s also cracked down on ‘net smut this week, closing websites that feature the stuff, cracking down on users that shared sexual material on social networks, and closing down a video sharing app whose name translates as “Eggplant”. The anti-smut effort was conducted to clean up the internet behind the Great Firewall. ®