Then solves a longstanding extinction puzzle

Scientists at the University of Michigan have celebrated an experiment where ultra-tiny computers were strapped to the backs of snails – solving a long-unanswered extinction mystery.

Since the 1970s, the snail population of the South Pacific Society Islands has suffered a massive extinction event with over 50 species wiped out – the victims of an alien snail with predatory instincts introduced to the ecosystem that decade.

"The endemic tree snails had never encountered a predator like the alien rosy wolf snail before its deliberate introduction," explained Professor Diarmaid Ó Foighil, curator of the Museum of Zoology at the University of Michigan. "It can climb trees and very quickly drove most of the valley populations to local extinction."

Most of the population, but not all. Partula hyalina survived, and until now nobody has been able to explain why that snail should avoid the fate of its native counterparts. Enter the snailputer: the Michigan Micro Mote, or M3, generally recognised as the world's smallest complete computer on its unveiling back in 2014, attached to the backs of snails under study.

"We were able to get data that nobody had been able to obtain," said David Blaauw, the Kensall D Wise Collegiate Professor of Electrical Engineering and Computer Science. "And that's because we had a tiny computing system that was small enough to stick on a snail."

The M3 measures just 2x2x4mm and is capable of harvesting power from its environment and communicating wirelessly using optical signals. Despite its size, it uses a common processor: Arm's Cortex-M0+, recently chosen to power the considerably larger RP2040 microcontroller at the heart of the Raspberry Pi Pico development board.

In the first field outing for the M3, scientists glued modified versions of the machines to the rosy wolf snails' shells in order to measure the intensity of light in their habitats, following a theory that the white shell of P. hyalina may allow it to survive in areas too bright – and therefore too hot – for the darker-shelled predator species. 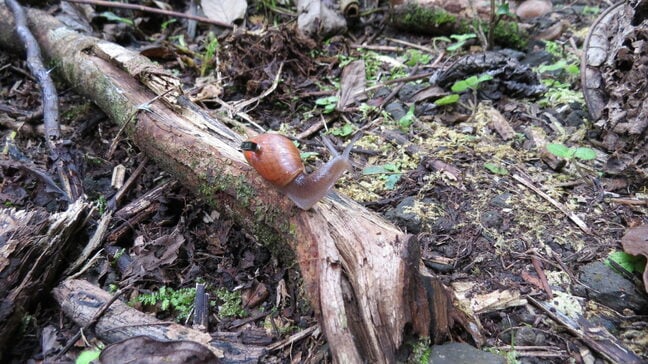 With P. hyalina a protected species, however, direct contact was out of the question – so the team instead used magnets to attach M3s to the tops and undersides of the leaves where the nocturnal snails slept during the day.

The results appear to back the theory up. The areas where P. hyalina slept recorded 10 times the sunlight levels found in the hunting grounds of the rosy wolf snails – data which would have been considerably harder to gather without the assistance of the M3.

"The M3 really opens up the window of what we can do with invertebrate behavioural ecology," claimed Ó Foighil, "and we're just at the foothills of those possibilities."

The next step is a project planned since October last year in which the M3 will be used to track the migration of the monarch butterfly, complete with details about the environmental conditions they experience en route – just in case gluing computers to snails is too easy. ®