Leak of glossy makeover turns hype up to ... you get the idea

Microsoft's Windows 11, expected to debut at a company event scheduled for June 24, has leaked online and is now appearing in screenshots on various websites. 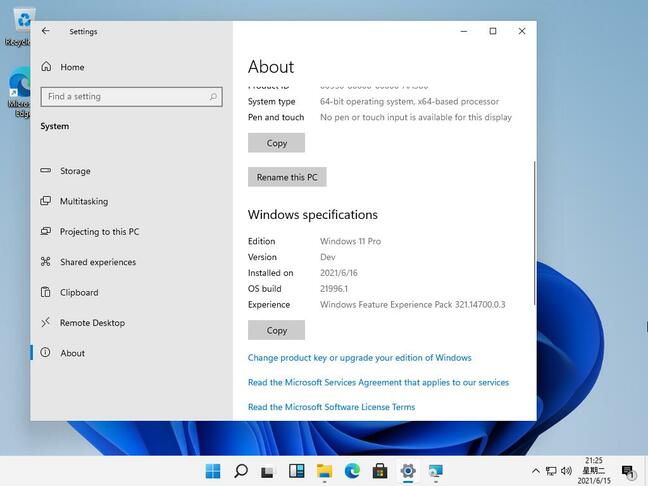 The leaked Windows 11 'About this OS' page showing off Windows 11 Pro. Source: Baidu

Windows 11 build 21996.1 showed up on Tuesday in pictures on Chinese mega-site Baidu. A Windows 11 disc image (an ISO file) has also been circulating. 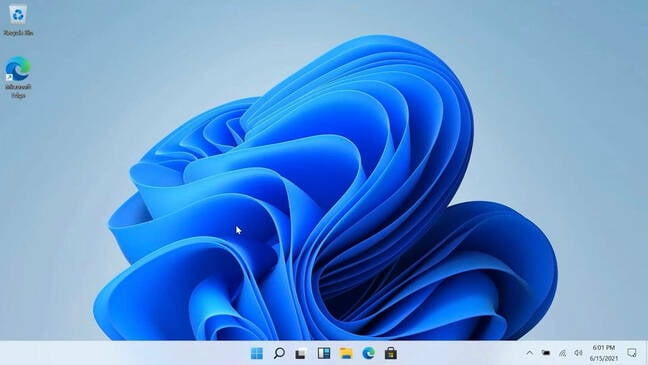 Behold, what the Windows 11 desktop will purportedly look like judging from the leaked build. Source: Hunter Rossi

The images of Sun Valley, as the release has been dubbed, reveal a visually appealing interface refresh and the conspicuous absence of Live Tiles in the Start menu, centered as it was in the cancelled Windows 10X project.

The Start menu includes a space for Pinned apps at the top. Below that, it features a Recommended section that lists recently used files and apps in a manner reminiscent of the Taskbar's Timeline feature. 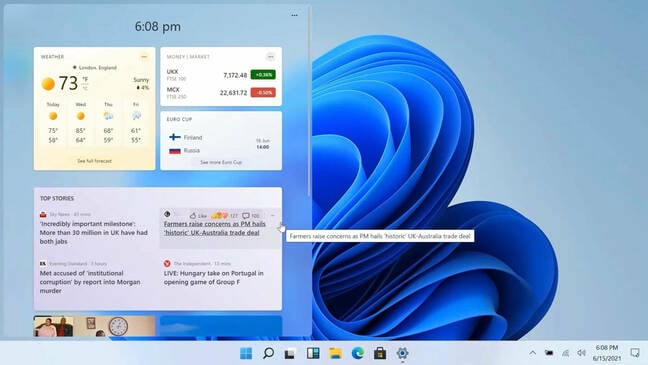 A screenshot of the Windows 11 widgets menu

The Taskbar, centered or left-aligned per user settings, no longer includes Timeline and adds a Widgets button that presents a menu of Widgets (mini-apps) that do things like display the time, weather, stock prices, and news. Widgets replace news and interests in the Taskbar that have started showing up for Windows 10 users.

The new look implements rounded corners in context menus, apps, and File Explorer. It also makes effective use of animations when windows and apps open, close, or get moved around. In addition, touch gestures have been expanded to make interacting with touch interfaces easier and more intuitive.

Some aspects of the Windows 11 interface remain unchanged, but that's to be expected in an early build. Overall, the visual refurbishment has met with modest enthusiasm from the Twitterati, which is about the best anyone can hope for on the internet. 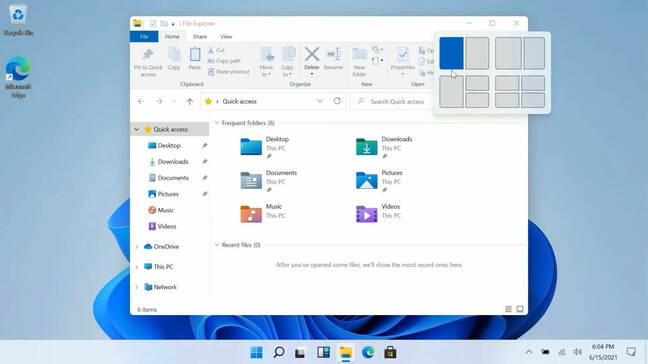 What the Windows 11 File Explorer will probably look like

The Twitter account Windows Aesthetics posted a poll soliciting opinions about the new look. With 860 votes cast, the breakdown was: it looks gorgeous (12.2 per cent); it looks nice (28.1 per cent); it's okay (37.7 per cent); and it looks garbage (22 per cent). Perhaps the new startup sound for the OS will change people's minds?

this is the new Windows 11 startup sound pic.twitter.com/UQZNFBtAxa

Microsoft did not immediately respond to a request for comment. ®