China launching first crew to its own space station on Thursday

China will on Thursday launch a crew of three on a mission to start assembling the nation’s first space station. It's China's seventh crewed mission in 18 years.

State-run media has named the three taikonauts as Nie Haisheng, Liu Boming and Tang Hongbo. Nie will command the mission and make his third journey into space.

The crew will stay aloft for three months and work on China’s Tiangong space station, the first module of which — named “Tianhe” — launched in April 2021. It caused a kerfuffle when bits of the rocket that carried it made an uncontrolled re-entry that just missed the Maldives.

In late May, China launched the Tianzhou-2 rocket carrying propellant, food and other supplies for this week’s mission. The rocket docked with Tianhe, and also sent home debris that spent two weeks on its way back to Earth before a few fragments are thought to have reached the Pacific Ocean.

Tianhe is 16.6 metres long and 4.2 metres in diameter, and houses all the life support kit that the crew will need to live in space for three months. China plans to bolt more modules onto the space station and this mission has brought another module with it.

The crew's chores will include starting operations of on-board life support systems, and space walks to configure the station.

China’s space station construction plan calls for a dozen launches, four of them crewed, stretching into 2022. 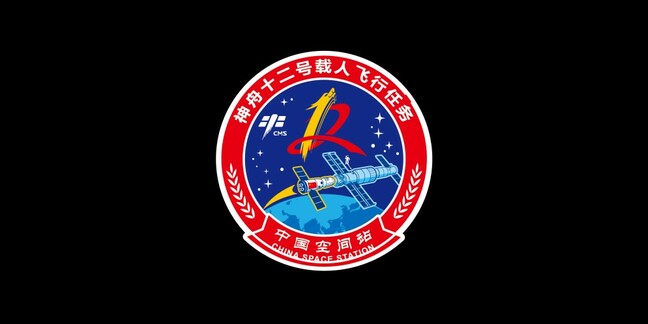 The mission logo for the Shenzhou-12 mission that will take three Chinese astronauts to space this week. Click to enlarge

Tiangong — which translates as “Heavenly Palace” — will be about one fifth the size of the International Space Station, and have an expected useful life of ten years. ®