Dependable Debian is like a rock in a swirling gyre of 'move fast and break things', and version 11 is no different

Hands on The Debian 11 is the venerable Debian Project's first new release in more than two years, nicknamed "Bullseye" after the Toy Story character and supplanting Debian 10 "Buster" (all Debian releases bear names from the kids' film).

Since Debian is the source from which dozens of other distros draw, notably Ubuntu, its major updates are well worth paying attention to, even if you aren't a Debian user. If you are a Debian user and you've been patiently waiting for an updated kernel to work with all the latest hardware, I have good news, the 5.10 LTS Linux kernel is here. More on that in a minute.

First, for the Linux newcomers, it might help to understand why Debian only releases new versions every couple of years when most popular distros crank out several new versions each year.

Debian is a huge, sprawling project and probably has more moving pieces than just about any other software project around. That's part of the reason Debian releases don't come along very often – it takes a long time to get that many ducks in a row.

The other reason Debian is slow to change is that it's supposed to be rock solid and reliable. In my experience at least it is exactly that. I've been running Debian on servers for well over a decade now and have never had an update break something. Never. There isn't a single other piece of software I could say that about.

Still, Debian's infrequent updates are an oddity in a software world obsessed with "moving fast and breaking things" as some like to say. Debian has a reputation for being a good choice for servers, but a little boring and behind the times on the desktop. That hasn't been true for a while now thanks to Flatpaks and Snap packages, but it's a reputation that lingers.

For many users, myself included, Debian is like a rock in an ever-swirling sea of updates. I recently rejoined the league of Debian desktop users after a few years in the Arch camp. While I still think Arch is a fine distro, I have reached an age where I have better things to do than look after my laptop. I want to install a system and not think about it again for at least five years. This is the use case where Debian excels and Debian 11 is no exception. It's been solid and "just works" since the RC 1 release I installed earlier this year.

Debian 11 ships with the shiny new Linux 5.10 LTS kernel, which happened to arrive just in time to fit into this release cycle. The 5.10 kernel, which will also be part of the next version of Android, will be supported until 2026.

The 5.10 kernel is notable for some speed improvements for the ext4 file system (the default file system in the Debian installer), as well as significant improvements to some less-common chip architectures. Debian calls itself "the universal operating system" and indeed its chip architecture support is far broader than most distros. That makes it a popular base for developers of everything from embedded devices to auto-based systems.

It's also worth noting, given that just about everyone else has abandoned it, Debian will still support i386. At this point, if you have a 32-bit machine still around, Debian is likely your best option for getting a well-supported system.

Along with the improvements mentioned above come the usual slew of kernel updates and hardware drivers to support new devices, including kernel-level support for exFAT filesystems. You no longer need to install Fuse just to mount a Windows drive. If you're curious to know the finer details of everything new in this kernel, you can read through the changelog.

Debian's repositories are legendarily massive and they just keep growing. Bullseye boasts 13,370 new packages, which brings the total to over 57,703 packages. Well over half of all that software has been updated for this release, over 35,532 packages. That's obviously beyond the scope of what I could begin to cover here, beyond the scope of what anyone can cover anywhere really, which is why I say Debian's scope is staggering. 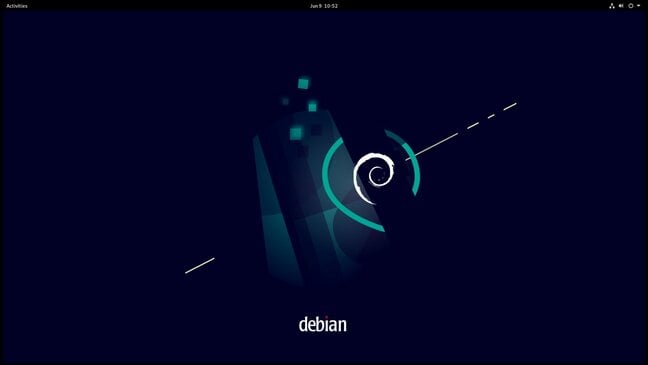 Among the highlights are some important changes to the most popular desktops and applications, as well as some significant updates to the server-side packages sysadmins rely on.

The desktop selection is larger with this release. From the installer you can choose Gnome (which serves as the default), Xfce, KDE, Mate, LXQt, and LXDE. If you opt for a minimal installation, you can then later install a number of other desktops, including my favourite, Sway. Most desktops are at or very near their latest release.

The same is true of major desktop apps like LibreOffice, which has been updated to version 7.0, and GIMP, which is now at 2.10.22. That said, Debian is not the distro to look to if you want the latest release from official packages. It might be pretty up to date for the release, but it won't stay that way. The solution is to use Flatpaks and Snap packages for the applications you want to keep polished.

Thanks to the fragmentation of apps across the Flatpak and Snap ecosystem, you'll probably want both installed. Fortunately both are dead simple to set up in Debian Bullseye and I had no trouble installing Flatpaks of Darktable, GIMP, Inkscape, Kdenlive, and other apps that I like to keep up to date.

While Flatpaks are nothing new, I think it's worth pointing out that they have largely delivered on that promise of providing up-to-date packages even on distros like Debian. Flatpaks (and Snaps) largely eliminate the old "it's so out of date" argument against using Debian on the desktop.

Another nice new feature for desktop users is support for driverless printing and scanning in CUPS and SANE. If you've got a relatively new printer or scanner, it should "just work" in this release. I don't have a scanner to test with, but Debian had no trouble connecting to my Brother printer and didn't require installing any drivers (which often are not free software).

The CUPS support works whether your printer is on the network or plugged in via USB, thanks to the new package ipp-usb, which uses the vendor-neutral IPP-over-USB protocol. This means your printer is treated as a network device, and driverless printing works even if it's actually connected via USB.

While the desktop improvements are welcome, the vast majority of Debian 11 installs will probably be on the server. There's plenty new for sysadmins in this release as well.

Debian's various development stacks have been updated, with most languages moving to their latest stable releases. Python is at 3.9, PHP 7.4, and the GNU compiler gets bumped to 10.2. Also notable, the PostgreSQL database has jumped from version 11 to version 13. Python 2.7, which reached end-of-life status some time ago is still around in some form for packages that haven't been upgraded but it isn't supported in any way.

Sysadmins will want to look over the release notes as there are a few potential gotchas among the new features in this release. Some changes to systemd especially are worth studying before you upgrade any mission critical servers. Debian developer Michael Prokop has a good overview of what's changed in Debian 11 from a sysadmin point of view.

As with any new Debian update quite a few things have been removed too. This time around some 7,278 packages have been dropped for one reason or another. Two that caught my eye were Chef, which has been dropped over trademark issues, and rsnapshot, a handy wrapper around rsync, which was removed because it's no longer maintained upstream.

I made the jump to Debian 11 several months ago when the first release candidate arrived and I've had no issues on the desktop. Debian 11 has been a stable, dependable system even pre-release. If you're already happy with your distro of choice, there may not be a lot to tempt you into Debian. Ubuntu, which is based off Debian's testing release, remains a friendlier distro for many since it makes installing any non-free software components much easier than Debian.

If you're already using Debian then you already know any new release is well worth upgrading to. The Debian Project has a good overview of how to upgrade from Debian 10 Buster to Debian 11 Bullseye, or, if you'd like to start fresh, you can always grab the live CD to do a clean installation. ®