FYI: There's a human-less, AI robot Mayflower ship sailing from the UK to US right now

A 15-metre-long autonomous human-free ship has begun a 3,000-odd-mile trip from the UK to the US to recreate the historic Mayflower voyage of 1620.

The Mayflower Autonomous Ship (MAS), named after the 17th century vessel that took more than 100 passengers from England to the present day's Massachusetts in America, set sail this week. It was launched from the seaside city of Plymouth on Tuesday at 0400 UTC, and if all goes to plan, it’ll reach its American counterpart, Plymouth, MA, in a few weeks.

Built by Promare, a maritime non-profit, with technical support from IBM, the Mayflower has been testing its sailing and navigation skills since September last year to prepare for this trip. It uses radar to detect objects within 2.5 nautical miles, and a suite of cameras connected to an object-recognition system. This machine-learning software has been trained to identify cargo ships, fishing vessels, and floating shipping containers. 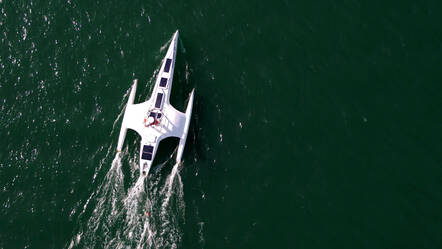 The craft also has software that can predict the weight and speed of other ships to help it avoid potential dangers. A GPS unit makes sure the Mayflower doesn’t stray too far from its path, and the computer system is programmed to take into account weather conditions as it navigates across the sea. Weighing in at 4,535 kilograms, or five tons, the ship is capable of reaching a top speed of ten knots, which is just over five metres per second.

"Able to scan the horizon for possible hazards, make informed decisions and change its course based on a fusion of live data, the Mayflower Autonomous Ship has more in common with a modern bank than its 17th century namesake," Andy Stanford-Clark, CTO of IBM UK & Ireland, said this week.

"With its ability to keep running in the face of the most challenging conditions, this small ship is a microcosm for every aspiring 21st century business."

Mayflower is a research vessel. Not only will it test the autonomous sailing technology, it has been kitted out with scientific instruments to take water samples to study microplastics and algae, and listen out for whales and other marine mammals.

You can track the Mayflower across its journey here. ®