Stob Exterior: model shot. The Enterprise is seen parked above the equator of a planet. As usual, it is at a peculiar, inward-shifting angle relative to its background. It gives the impression that, far from being captured by gravitational pull, it can only sustain its orbit by continually bearing hard to the left, as though the modelmakers were unaware of the comparative scale of planets and spaceships. 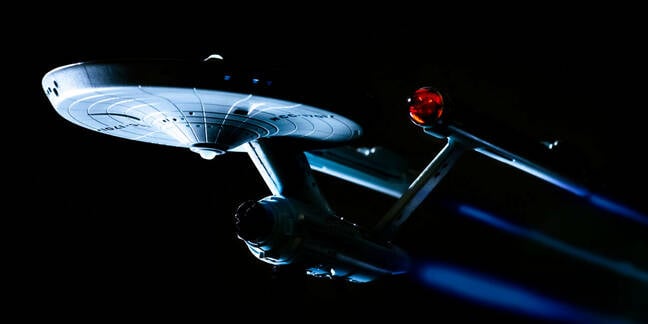 KIRK in voiceover: Captain's log, Star Date 3006.4. While on course to PERNAIA PRIME, the Enterprise has picked up a distress call from the planet MARCOS 2. The inhabitants have been afflicted by a pangalacticdemic space plague variant, and are in urgent need of medical assistance. We have therefore rerouted our course to take in the Marcos system, and provide such help as we can.

Interior: The Wimpy Bar which serves as the Enterprise's bridge (this bang-on description © Clive James circa 1979). Most of the usual suspects are present, including the ship's captain in his Jim'll Fix It chair, the first officer by his side and – just entering from the lift – its doctor.

KIRK: Ah! There you are, Bones. Settle a medical argument for us. What is the word that describes how readily a disease can spread? The term I have always used is "infectiousness," but Mister Spock here won't have it.

MCCOY: Well, Jim, a lot of people do think that, but the right word is "contagiousness" and it is measured by something called R0…

SPOCK: Actually, doctor, the correct word is "transmissibility." This can easily be seen by examining the linguistic roots of the alternatives. "Contagious" comes from the Earth Latin word TANGO "I touch" so a contagious disease is one that only…

MCCOY, annoyed: Listen, you hopeless Oz impersonator! I'm a doctor, not an etymologi…

The camera follows Kirk's pointing finger to a notice affixed to the wall by the main screen. It says:

NOTICE TO ALL CREW MEMBERS

NO CATCHPHRASES ON THE BRIDGE

We hear a whistling sound. Uhura puts her hand to her ear piece.

UHURA: Captain, the governor of MARCOS 2 is hailing us.

UHURA manipulates her console. There are the usual Star Trek beep-boop noises, but nothing else happens. There is a pause.

UHURA, listening to her earpiece: Apparently Zoom is banned on MARCOS 2, captain. They have heard bad things about its security.

UHURA: Shall I try Teams?

CHECKOV, bitterly: You can't use Teams. They let our subscription lapse.

MCCOY: A good thing too. It truly is the Lotus Notes of the 23rd Century.

SPOCK: Mr Sulu has a copy of Home Office 365 on board. He uses Excel spreadsheets to catalogue entries on his FB page. I think that includes a 30-day free trial version of Teams. He's Working From Quarters today, but perhaps we could call him up and borrow his password?

MCCOY, to Spock: They did away with taste as well as emotions at that Vulcan training school, did they?

ENSIGN NOBODY at Sulu's station: Can't you do video in Slack now? Where you click on the little phone thingy? Although it's not very good.

SPOCK: What, precisely, are you insinuating, doctor?

ENSIGN NOBODY: Or we could ask Mr Scott. He's always solving technical things.

CHECKOV: You won't get anything out of Scotty this episode. He's holed up in warp nacelle #2, box-bingeing Tim Hunkin's wonderful new and remastered Secret Life videos.

MCCOY: By the way, they fixed the security hole in Zoom years ago.

KIRK, reimposing his authority: That's enough, everyone! Uhura! Do we still have Skype installed?

UHURA, dubious: We might have the app version, sir. I think I deleted Desktop.

KIRK: Nonetheless, please try to raise the governor on Skype.

Uhura turns back to her console. There is more beeping, then the main screen clears to show someone sitting at a desk, photographed from the unflattering "laptop lid" angle, emphasising multiple chins. A bookcase behind him is loaded with suspiciously many learned-looking books. There are several hardback copies of Governing Planetary Colonies the Right Way, by The Governor prominently positioned near the centre of the screen. The governor has recently been interviewed on MARCOS 2 Newsnight.

The governor has the face of a cat.

KIRK, quiet aside to Spock: I didn't realise the governor was an alien.

SPOCK, allowing his right eyebrow to float into the quizzical position: I think you'll find it's just a filter, captain.

KIRK to Spock: They let amateurs govern planets these days? (Addressing the screen) Governor, we understand your planet has become infected with the ν variant of the virus…

SPOCK: Ensign, the captain means that it is "nu" variant, the Earth Greek letter ν, assigned to the 13th significant mutation that has been catalogued.

MCCOY, muttering: Although why we can't just call it "the Klingon variant" like we always have…

The governor draws breath to reply to Kirk, but just as he opens his mouth, a very loud clock begins to strike the hour somewhere off screen. He stops speaking.

The clock continues to strike. It must surely have struck twelve by now.

The clock is still striking. The Enterprise crew shuffles its feet and examines its fingernails.

KIRK to Spock: Spock, how long is the MARCOS 2 day?

KIRK, shouting over the clock: Governor, do you think we could reconvene when…

GOVERNOR, still as cat: Ah, the storm. The storm has passed, yet is coming. Pick up the crumbs. Would it blow your mind if I told you BL has been to VK and is perhaps there now?

KIRK, baffled but pressing on anyway: Governor, what sort of vaccination programme would you…

GOVERNOR CAT: Why isn't the kirk captain, Captain Kirk? Do you follow the money? Or does the money follow you? Phone numbers will be provided in the event of an uprising.

GOVERNOR CAT: Slush fund? You have more than you know. The American people are NOT STUPID.

GOVERNOR CAT: Which of the three musketeers do we trust?

Athos? ……. If the records become unsealed, much will be revealed.

KIRK, abruptly enlightened: Uhura, terminate the call please. (We hear the Skype hanging up noise, which you thought you had forgotten. The screen clears.)

Thank you. Spock, get a team together of the ship's least replaceable, most senior officers, plus a couple of non-speaking red shirters, and prepare to beam down. Everybody to be equipped with ineffective phasers and communicators that don't work in the MARCOS 2 atmosphere.

SPOCK: Captain, what have you discovered?

KIRK: The so-called "governor" is none other than our old friend Q. You know, that mysterious, recurring enemy of the Star Fleet captains and deliverer of gnomic gibberish blaming everything on the inferiority of Humanity, the Borg Collective and Hillary Clinton. We need to get boots down on the ground and sort him out.

SPOCK: But surely the character of Q wasn't introduced until The Next Generation?

MCCOY: To some people, Spock, "canonicity" is just a word. You're lucky we didn't get cybermen. Or hobbits.

KIRK, standing up and making for the lift: Stop gassing, Bones, you are coming too. To the transporter room, everybody!

UHURA: Oh, Captain? If you are beaming down to the planet's surface…

KIRK, irritated: Yes, Lieutenant? What is it now? This is an urgent situation.

UHURA: If you are beaming down, shouldn't you put on some trousers? ®

Verity Stob is the pseudonym of a software developer based in London. Since 1988, she has written her "Verity Stob" column for .EXE magazine, Dr Dobb's Journal and, since 2002, The Register.

Manufacturers allegedly told to connect to NavIC by 2023, which did not make them happy at all
Personal Tech28 Sep 2022 | 1