Plans to roll 1,000 of 'em off the production line in three years

Chinese tech giant Baidu and state-owned BAIC Group's ARCFOX Brand have teamed to build 1000 autonomous electric vehicles (EVs) for use as taxis over the next three years — and claim they’ve cut manufacturing costs to just $75,000 apiece.

The announcement claims the reasonable price is due to maturation in technology and mass production capabilities and makes the vehicle, called the Apollo Moon, only one third of the cost of average L4 autonomous vehicles.

Apollo Moon has a projected operating cycle of over five years and is built on the fully electric midsize crossover SUV, Arcfox α-T. As for the tech, it uses the ANP-Robotaxi navigation platform, which is currently in pilot. Baidu claims the architecture can “reduce the weight of autonomous vehicle kits while sharing intelligent driving vehicle data to create a closed-loop information ecosystem.” 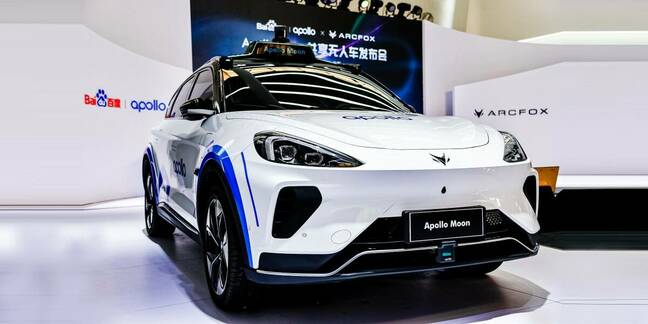 The robo-taxi uses an assortment of sensors, 13 cameras, customised LiDAR and supports 5G remote driving service and V2X (vehicle to anything) technology, which means the vehicle can communicate with all manner of electronic devices. It also has an AI voice assistant, climate control via app, intelligent doors and an electronic display attached to the sunroof so riders can spot their taxi.

The partnership between Baidu and BAIC Group is not new — the two groups have partnered to produce and promote Chinese autonomous vehicle technology since January 2017.

The significance of this new effort is the low cost of producing an Apollo Moon, as the pair of companies hope it will mean greater production scalability and thereby increase China’s commercialisation of fully autonomous ride-hailing services.

By way of contrast, The Register used Ford USA’s online configurator to pimp its most popular product — the F150 truck. Even after adding almost every accessory we could click on — even the "Onboard Scale with Smart Hitch" — the price stayed south of $70,000. Of course that’s not production price, but margins on cars aren’t enormous. It’s therefore impressive that Baidu and BAIC can produce an autonomous car packed full of tech for $75k — never mind one hardened for the rigours of taxi work.

Baidu commenced operations of actual driverless taxis in Beijing last month, in preparation for the 2022 Beijing Winter Olympics. Since then, the company has expanded robo-taxi ride-hailing services in cities including Beijing, Shanghai, Guangzhou and Chongqing. ®