What job title would YOU want carved on your gravestone? 'Beloved father, Slayer of Dragons, Register of Domains'

How did I love thee? Let me count the email redirections

Something for the Weekend, Sir? How many websites do I have? Go on, take a guess. Well done! You might be correct… or perhaps not. Honestly, I have no idea.

As the weeks slip into summer, a recurring half-yearly to-do item pops up in my calendar to remind me it's time to get out the digital pruning shears and cut back my online overgrowth.

My calendar does that sort of thing. Other people's agenda apps are full of meetings and birthdays, or weekly prompts to upload another blatant virtue-signalling post to LinkedIn. If you use Calendly, you may notice it now also works as a subliminal aide memoire to take regular toilet breaks.

The ease with which I can bash out one-off sites for one-off purposes tends to leave a trail of dead subdomains in my wake. They are always created with urgency for something that probably seemed really important at the time, then forgotten a week later. Every six months I force myself to sweep up the debris. And once a year, I consider condensing the various email addresses I have accumulated over the past 12 months into aliases or just delete them outright: most were created for one-off login IDs anyway, designed to be ditched immediately afterwards… something I always forget to do.

Given how much of my valid incoming and outgoing email goes astray or direct-to-recipients'-spam these days, I may even look for a more reliable host with a better WHOIS reputation. I find the simple domain-shifting process stressful enough – Have I backed up everything? Will any messages get bounced? Are the servers really situated in Europe or is the host just cloning big boys in the US? – to keep putting it off. My calendar reminds me that it's been more than a decade since I last did it. Wish me luck.

Tidying up my toys after play is boring so I have put on some calming music in the background. I did read somewhere – possibly in one of those aforementioned LinkedIn arseguffs – that the right kind of background sounds will lengthen my powers of concentration. Or lengthen my life. Or penis. I don't remember exactly; let's hope it lengthens my memory retention.

Talking of vacuous posts of wafer-thin uninspiration by sly self-marketeers with hidden agendas, I read one this very week on LinkedIn that proclaimed: "No one puts their job title, degrees or work history on their tombstone." This was followed by the usual nagging about being kind to yourself, living your life, that sort of thing. "Walk around any cemetery and you'll see 'Beloved mother', 'Loving father', 'Wonderful friend' carved into the stones. You are more than your job!"

Is this right? I do enjoy a non-ghoulish graveyard jaunt on occasion and I can assure you that cemeteries are full of tombstones which make particular reference to the deceased's ex-profession. Author, painter, master baker, doctor, engineer, long-time reverend of this parish, and so on. Fair enough, I have yet to see a grave marked "James Clitheroe, VP Paperclips and Self-Adhesive Stationery Items (Northern Europe)" but referring to the dear departed's work occupation is pretty standard stuff.

What would you prefer on your gravestone instead – a list of your life experiences outside work? "R.I.P. James Clitheroe, Collected Attack On Titan figurines, Had trouble starting his car on cold mornings" or perhaps "Here lies Susan Donim, Difficult aunt, Unsettling cat lady, Watched a lot of Netflix"?

Here's the tombstone of Spike Milligan. Who, you ask? Well, read it and you'll find out: "Writer, artist, musician, humanitarian, comedian." Five job titles! That LinkedIn poster would be appalled. 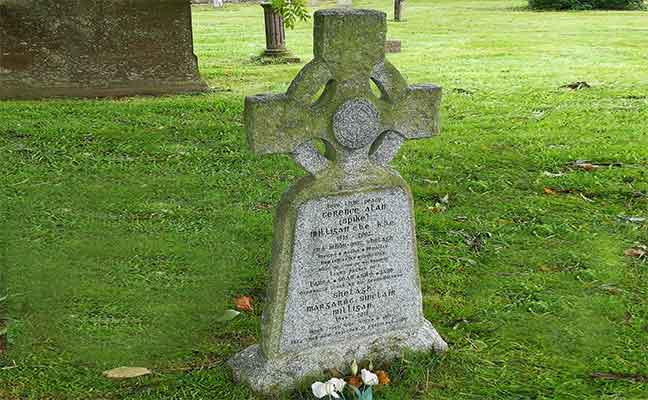 Spike Milligan's tombstone in the churchyard of St Thomas's in Winchelsea. He told us he was ill

Mind you, Spike's grave also bears his notorious self-penned motto: "I told you I was ill." Unfortunately, the local authorities thought it undignified to inscribe jokes on the gravestones for fear of causing churchyard visitors to smile by accident. Spike's family were obliged to disguise the motto by getting it carved in smaller letters using an almost illegible font and, to be on the safe side, translated into Gaelic: "Duirt me leat go raibh me breoite."

His tombstone faces the local pub just across the road.

Hmm, my schlong-lengthening audio doesn't seem to be playing. Or working, by the look of it. The music was supposed to stream over the internet via an app but – nothing. No surprises there, to be honest: there has been a surge of interest in fresh audio tech over the last 18 months and while there may be plenty of startups in this field dreaming of becoming unicorns, most are going to be donkeys.

I don't mean this unkindly. There will be plenty of thoroughbreds and stud racehorses in the mix too, and at this point it's probably best that I, er, unsaddle the fantasy equine analogies. Let's unhook the stirrups and walk on.

One particular area of audio hardware tech that's enjoying a reprise at the moment is buzzy, vibrate-y devices that transmit detectable sound into your body via parts of your body that aren't necessarily your ears. I haven't seen many of these for several years, not since visiting an IoT exhibition where a rep forced me to listen to dreadful chart music through headphones that clipped over the joints of my jawbone below my temples. In principle, the concept has some value as it leaves your ears unobstructed. In practice, well… nothing prepares you for the experience of hearing Justin Bieber through your teeth.

A company called Flexound, for example, has launched something it calls Augmented Audio that it says plays sound through your skin. I even read about some ex-Rolls Royce engineers who developed a "smart" sleeping mat for babies that plays white noise or heartbeat vibrations to help little Lilibet get the best out of her afternoon nap.

This goes to show how far we have come. Not long ago, you could only achieve this with a dummy and a Calpol overdose. I wonder if they make them for grown-ups.

So where are my soothing sounds? I've quit and relaunched the app, checked for updates and restarted my handset. The app is still playing dumb – hardly music to my ears. Or jaw. Or privates.

I visit the app's website for clues, only to find that the website is down for maintenance. To be precise, a holding page tells me that they are moving over to new servers and that the process will take two weeks. Eek, if it's going to take that long for a proper business, maybe I'll put off moving my own stuff and leave it where it is for a bit longer.

Alistair Dabbs is a freelance technology tart, juggling tech journalism, training and digital publishing. His first port of call for music these days is Bandcamp. Besides its generally ethical stance toward royalty payments to artists, it is an exceptionally good source for Canadian ambient, Scandinavian metal, and other such that nobody else likes. More at Autosave is for Wimps and @alidabbs.