Anonymous US intelligence sources: Yes, we did it

Updated Nearly three dozen Iranian media websites have been taken down apparently by the US government. 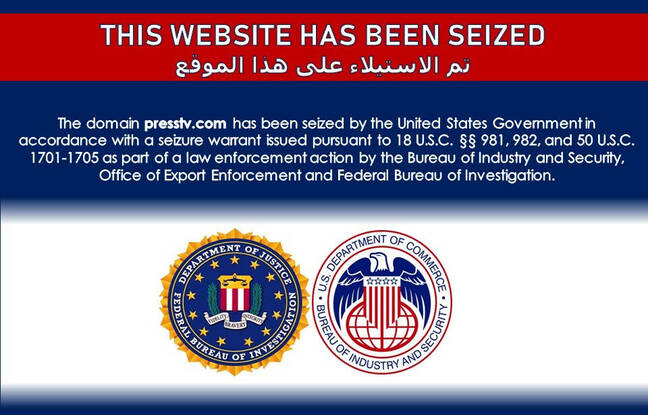 On Tuesday morning, in an coordinated move, the dot-com and dot-net websites of Iran's Press TV, Al-Masirah, Al-Alam, and Al-Maalomah, Bahrain's Lualua television, and others, all displayed a message saying that the sites had been seized by the US Bureau of Industry and Security, the Office of Export Enforcement, and the FBI.

So far the enforcement action appears to have had limited success. Most of the outlets have simply switched to .ir domains, and PressTV is also operating now from a .co.uk domain, although one suspects that one won't last long either. The station blamed the US government.

The US government isn't saying anything at the moment though numerous anonymous sources have confirmed to American media that it was indeed Uncle Sam that made the move. It was said that the sites were commandeered for spreading misinformation and propaganda.

The confiscation comes the day after Iran elected hard-line conservative Ebrahim Raisi as president, one step below the Supreme Leader in the leadership chain. He was elected with more than 60 per cent of the vote after his serious rivals, who were moderate candidates, were banned from standing, leaving him to defeat Hassan Rouhani, the incumbent president. Overall voter turnout was just under 50 per cent.

In his acceptance speech on Monday, Raisi promised not to meet President Biden, pledged to keep up Iran's ballistic missile program, and said the United States – dubbed "the Great Satan" by the late Ayatollah Khomeini – “is obliged to lift all oppressive sanctions against Iran.”

Doesn't look like that's working out too well for him so far. ®

The US Department of Justice has confirmed that the American government did take down the Iranian websites.

The sites in question were "in response to the Iranian regime targeting the United States’ electoral process with brazen attempts to sow discord among the voting populace by spreading disinformation online and executing malign influence operations aimed at misleading US voters," it said.

"Components of the government of Iran, disguised as news organizations or media outlets, targeted the United States to subvert US democratic processes."

In all 36 sites were taken down in the action.