Flexispot Deskcise Pro V9: Half desk, half exercise bike, and you're all sweaty. How much does it cost again?

Not ideal for when you rejoin colleagues in the office

Review Tech journalists don't exactly file copy from the front lines, testing software while dodging AK-47 fire. The major risk to our health - like millions of office workers - comes from dozens of Mars Bars or other snacks eaten while tapping away on the keyboard at home.

Billed as a fix for this sedentary lifestyle comes the Flexispot Deskcise Pro V9, which we tried out so you don't have to.

In true Ronseal fashion, this is pretty much what it sounds like. It’s a desk (or, more accurately, a standing desk) pretending to be an exercise bike. Just imagine an exercise bike with the handlebars ripped off, and in their place a small work surface with enough room for a laptop.

For Vulture Central, it also immediately raised these two questions: What’s the point of an exercise bike without the handgrips? Why bother if there's not enough room for sufficient monitors to kit out a day trader at Goldman Sachs?

Regular readers of El Reg will perhaps remember we reviewed the Flexispot E7 motorised standing desk earlier this year. While it largely earned our seal of approval, we were forced to knock a few points off for the building process, which was annoyingly fiddly.

The Deskcise Pro V9 is a different matter. It arrived in two boxes. The first, and largest, contained the entire lower half. The bike — including the caster wheels and pedals — came fully assembled.

Inside the second box, which arrived three days later, was the surface top. This slotted into the cavity that would otherwise contain the handlebars, and screwed in with a single bolt. 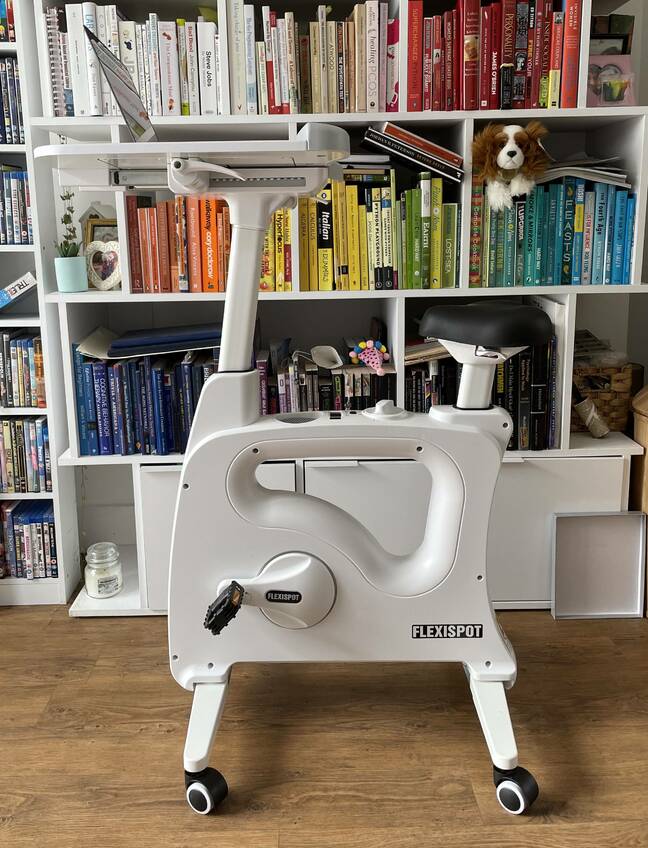 And that’s it. Three minutes after unpacking the kit, you're ready to start pedalling, without fiddling in your own toolbox (the solitary screw was accompanied by a compatible hex key).

So, what’s it like to ride? Flexispot at least managed to get a few things right. The surface top is adorned with a thick strip of cushioning material, which removes most of the pain associated with resting your wrists on a solid surface. It also ensures your hands are slightly elevated above your keyboard, limiting the amount of movement you make when frenetically typing. 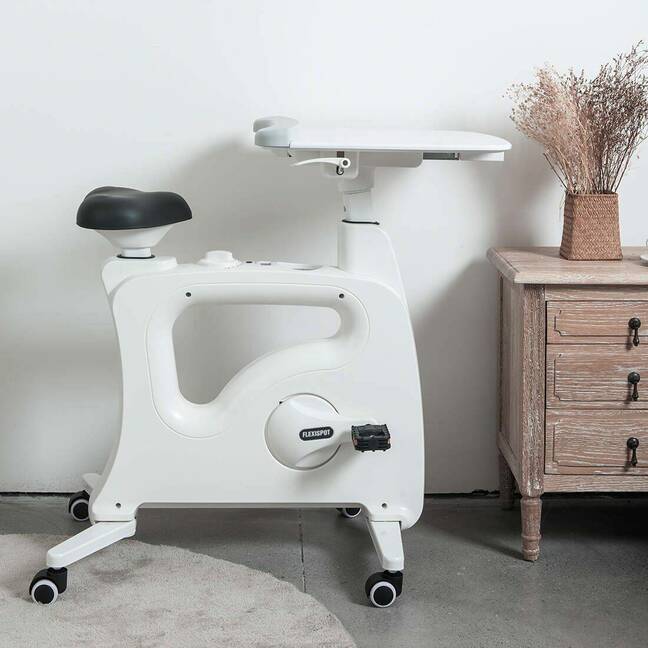 Although the seat is fairly wide, there’s no back support at all and you’ll inevitably find yourself hunched over as you work.

Eventually, you’ll tire of using the Deskcise Pro V9 in its bike form, as most are unaccustomed to spending consecutive hours perched on an exercise bike’s saddle. Unless you have the iron-clad rump of Bradley Wiggins, you’ll find yourself getting sore.

That’s the point at which - if you haven't tossed it out - you step off and use this as a normal standing desk. You can adjust the height of the saddle and work surface by pulling on their respective levers, although we note you’ll need to put a lot of weight on the seat to make it go down.

Another downside of the Deskcise Pro V9 is that it inherently leaves no room for a decent anti-fatigue mat, which is a necessity when using a standing desk. You can mitigate against this by wearing a decent pair of running shoes, but it’s no real substitute.

Another issue is that there's not enough desk space to support multiple screens. Its small work surface limits its potential as a full workstation, so it's only really functional if you solely need the integrated display on your laptop.

Stability isn’t an issue, however. The bike has four legs, which can retract underneath the body for easy stowage. These are sufficiently long to give you a low centre of gravity. Similarly, the work surface stayed put no matter how frenetically we pedalled, but, again, that only works if you only need that one MacBook Pro.

Why not just get ... an exercise bike

The bike element of the Deskcise Pro V9 does work. It comes with eight different resistance levels, which you can switch between by turning a dial. Higher resistance levels mean a tougher, more exhausting workout.

Above that, you’ll find a small LCD display, which shows the usual info you’ll find on a normal piece of fitness gear. It’ll give you an estimate of how much distance you’ve theoretically travelled, the number of calories you’ve burned, and so on. This is powered by two AA batteries, which sit underneath the cup holder. 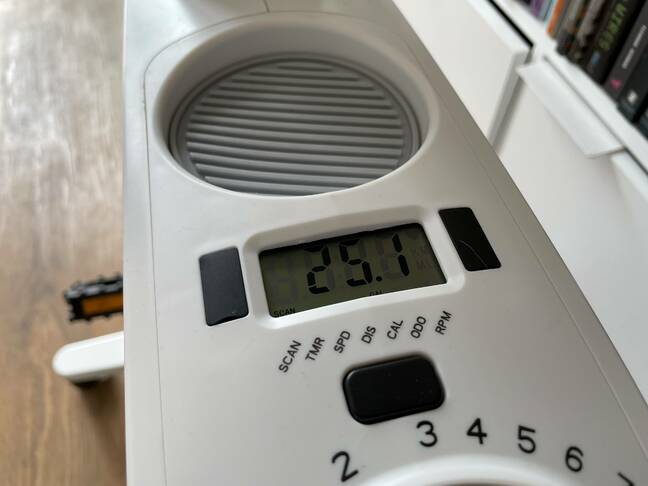 The pedals offer a decent amount of grip, and don't come with a shoe strap, which meant we could comfortably use the desk bike irrespective of our choice of footwear.

Still, we can’t help but think this bit of kit is only really suited to a world in which working from home is the norm. It might have been the scorching June weather, or this reviewer's grossly inadequate standards of physical fitness, but it didn’t take me long to start sweating like a 1970s TV presenter when he hears an unexpected knock on the door.

Use this in a conventional office, and it’s only a matter of time before your colleagues start filing grievances about how the workplace suddenly smells like the locker room at a municipal gym.

As an exercise bike, it’s competent, delivering on the essentials of a decent piece of workout gear. But it's not a full replacement for a proper bike, and it's priced too high for a piece of crossover equipment.

While developers need their extra displays for looking up bugs on Stack Overflow, or switching between their code and builds, the Deskcise Pro V9 is really only suited for simple tasks, like, er, blasting through your emails or burning off some calories while you, erm, watch a webinar... in which case, just shove a laptop on a regular exercise bike.

There are some bright spots. With the legs stowed, this desk/bike doesn’t take up much room, and the built-in wheels mean it’s easy to lug it from one room to another. It's easy to build (just one screw and you're good to go). It’s also a fairly simple way to incorporate exercise into your daily routine. However, if you find yourself struggling to peel yourself from your chair to go to the gym, why not just buy a regular exercise bike?

And here's the rub: it’s not cheap. The model reviewed retails at £449.99, which is almost triple what you would expect to spend on a basic exercise bike from Amazon. It’s also slightly more expensive than the current price of the Flexispot E7 standing desk reviewed earlier this year.

In our view, it's only a workable alternative to a treadmill desk if you have limited computing needs. ®

Who, Me? In the age of tractor-fed printers and perforated paper, telling a junior to tear it up was close to negligence
On-Prem6 Feb 2023 | 18

Dear government, this thing is written by volunteers. Take it up with them. Also: shouldn't you know this already ?
Personal Tech6 Feb 2023 | 11