Updated Microsoft on Monday released its first Windows 11 Insider Preview build (22000.51) to its Dev channel. It also took the opportunity to tackle head on the criticism it faced over the operating system's tough hardware requirements.

A Microsoft document [PDF] released last week details the hardware requirements for Windows 11. It states TPM 2.0 support is required: "All device models, lines or series must implement and be in compliance with the International Standard ISO/IE C 11889:2015 or the Trusted Computing Group TPM 2.0 Library and a component which implements the TPM 2.0 must be present and enabled by default."

At the same time, some hardware makers will be exempt from that requirement though only with Microsoft's permission. "Upon approval from Microsoft, OEM systems for special purpose commercial systems, custom order, and customer systems with a custom image are not required to ship with a TPM support enabled," the document stated.

The Register asked Microsoft to elaborate on exceptions, and a spokesperson declined to provide more detail than had been published in the Windows giant's blog post, published earlier today.

The TPM 2.0 requirement applies to all x86 and ARM64 hardware apart from Hardware-level Fault Tolerant sets of Windows Server systems, which are incompatible with TPM. Microsoft's documentation specifies that TPM 2.0 is required in servers introduced to the market from January 1, 2021 onward, which suggests older servers may get a pass if approved by Microsoft.

The TPM and Secure Boot requirements are supposed to set a high bar for security, at a time when Microsoft signed off a malicious third-party Windows driver that could snoop on users.

So some stuff will work, for now

Microsoft's post updates its minimum system requirements for Windows 11 in an effort to clarify its statement last week that Windows Insiders who have already been installing Dev channel builds through June 24, 2021 will be allowed to continue doing so for Windows 11 "even if their PC does not meet the minimum hardware requirements."

"The intention of today’s post is to acknowledge and clarify the confusion caused by our PC Health Check tool, share more details as to why we updated the system requirements for Windows 11 and set the path for how we will learn and adjust," the mega-corp said in its update.

The PC Health Check app was previously available from Microsoft's website. The app had been removed for maintenance at the time this article was filed because it confused people.

"Based on the feedback so far, we acknowledge that it was not fully prepared to share the level of detail or accuracy you expected from us on why a Windows 10 PC doesn’t meet upgrade requirements," Microsoft said. "We are temporarily removing the app so that our teams can address the feedback."

A direct download link from the Windows 11 FAQs still functions, however.

The weirdest thing about Windows 11 so far that I'm seeing is that the upgrade check returns *only* a pass or fail. Despite obviously checking for specific things internally, no more detail is given. That's really strange user-frustrating behavior. pic.twitter.com/1VMAaDS6Hj

At issue have been systems like the Microsoft Surface Studio 2, which supports TPM 2.0 yet uses an Intel seventh-generation Kaby Lake Core i7-7920HQ microprocessor from 2017 – which is not an approved processor. Even though it's recent enough to have the needed TPM support, why would it be too old to run Windows 11? Especially seeing as the Studio 2 is a Microsoft product.

Currently, the minimum system requirements for Windows 11 are as follows:

This chart explains, sort of. 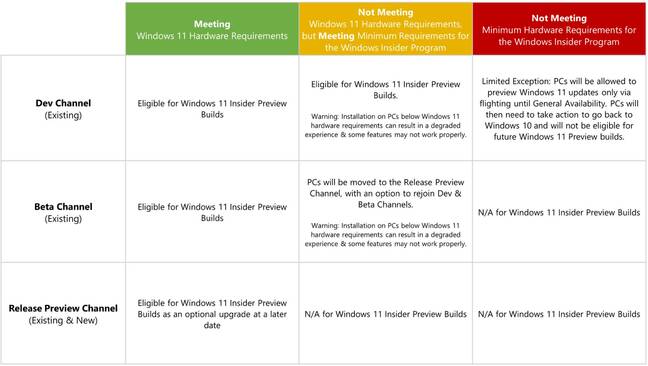 Worth the new look?

The Start bar and the Taskbar have been revised and now sit at the center of the window bar. There's a button for Notification Center and Quick Settings in the Taskbar. File Explorer has been reworked and enhanced with context menus that developers can extend. There are also new sounds and themes, and Widgets too.

Multitasking has been enhanced with features like Snap layouts, Snap groups, and Desktops, which provide ways to organize applications and workspace environments. Docking behavior has been adjusted, there are various input and display improvements, the Settings interface has been redesigned, and the Windows setup experience has been improved. There's even Wi-Fi 6E support, for those who have a compatible Wi-Fi router.

Anticipated features like Chat with Microsoft Teams and Android apps in the Microsoft Store aren't yet available but are expected within the next few months. The operating system may be released as early as October. ®

El Reg was also surprised to find that when Windows 11 turned up on the Insider programme, its release number was... 10.

A Microsoft spokesperson told The Register that TPM 2.0 is required for Windows 11 and exceptions may be made for certain vendors.

“For highly specialized devices used for commercial purposes for reasons that extend beyond general compute, we refer to those as ‘special purpose PCs’ and our partners have a path to request a waiver for new devices to ship with TPM disabled,” Microsoft’s spokesperson explained. “Likewise, for certain IoT scenarios a customer may need to ship a device without TPM which does not have any dependencies on these Windows features.

“Customers will also still retain the ability to disable TPM in the device firmware as long as the OEM supports doing so. This may be needed for certain debug scenarios,” Microsoft’s spokesperson said.

“In all cases for consumers and breadth commercial or EDU we do not recommend devices without TPM along with our other baseline security requirements. This has been an OEM new device requirement since 2015 and our commitment to customer security continues with Windows 11.”