Plus great news for all seven of you: An ARM64 build of its software suite

Amid the unveiling of Windows 11 and the backlash over the frankly pisspoor way Microsoft handled the operating system's hardware requirements, the software behemoth quietly emitted a native ARM64 build of its Office cash cow.

It announced a little redesign of Office, too, or as Redmond put it, a "visual refresh."

The state of Office for Windows-on-Arm devices, including Microsoft's own Surface Pro X, has been a little muddled. Office 2019 for Windows Arm computers is actually a suite of 32-bit x86 applications running on emulation rather than a set of pure Arm applications. To make things extra awkward, Microsoft released a native Arm build of Office for Apple's M1 hardware in 2020. So macOS has a native Arm port and Windows doesn't.

However, with the arrival of Windows 11 – for dev channel insiders, at least – replete with the x64 emulation previewed in earlier insider builds, a native 64-bit version of Office on Arm is now available to those brave enough to sign up to the Office beta channel. The emulation engine catches any straggling x64 code.

"This new version of Office," said Microsoft engineering manager Mike Smith, "is designed specifically for the next version of Windows on Arm. It has been recompiled for the Arm architecture to run fast, bring greater memory availability, offer better support for large documents, and maintain compatibility."

The latter point is key for Microsoft's Office ecosystem. The compatibility with existing x64 add-ins is achieved via that x64 emulation in Windows.

The big four – Word, Excel, PowerPoint, and Outlook – are, according to Microsoft, "enabled as ARM64" along with OneNote. Other applications run in x64 emulation mode. Microsoft also noted the apps were built as ARM64EC (Emulation Compatible) software to permit interoperability with legacy x64 add-ins.

Sadly, while Microsoft has claimed it "noticeably" improved performance, there are problems. Teams integration with Outlook isn't complete and there are some major problems with search: Windows cannot search for Office files, certain types of searches in Outlook (for example messages in the same conversation) do not work, and OneNote search speed is sluggish.

Then again, this is very much beta code at the moment, and the mega-corp is keen for users – at least the few with a Windows-on-Arm device signed up to the Dev Channel Windows Insider program – to give it a kicking. Running the beta also requires the Windows 11 Insider Preview Build, meaning it is unlikely to be troubling production environments.

Not only is there a native Arm build coming our way but also a mild refresh of the Office user interface. 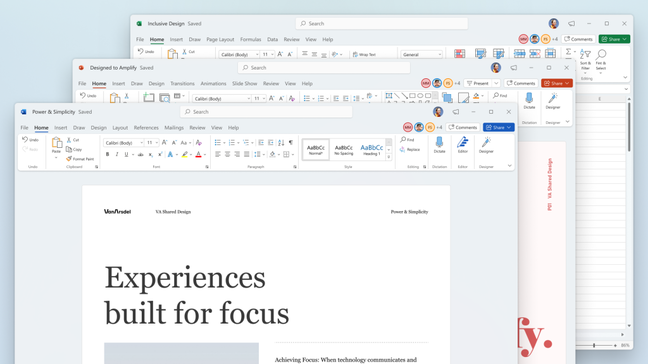 A screenshot from Microsoft of the refreshed Office user interface

Microsoft has basically tweaked Office to bring it in line with the Windows 11 user interface and its Fluent Design principles. The update will be automatically available to Office insiders running beta channel builds, and can be, depending on which app you're using, turned on and off via the "coming soon" button in the top-right corner of an application window.

The Windows giant would like to draw your attention to "the default neutral color palette, customizable ribbon, and soft corners" in Word, Excel, and PowerPoint. You can see more in the penultimate link, plus caveats on enabling and disabling the UI. ®