Rugged fondleslab ideal for field work starts at £2,218 with lots to configure

Panasonic's Toughbook G2 tablet will feature 10-finger touch even with gloves on and full Windows 11 compatibility.

Designed to meet the IP65 water and dust ingress and MIL-STD 810H environmental test conditions, Panasonic's Toughbook lands as the company celebrates 25 years since the first bulky bounceable laptop dropped off the production line in 1996.

Built around the buyer's choice of 10th-generation quad-core Intel processor with up to 32GB of RAM and 1TB SSD – available with an optional quick-ejection mechanism, for secretive types who want to be able to send their storage flying through the nearest window at a moment's notice – the Toughbook G2 comes with wireless upgrades over its predecessor the G1, an improved high-brightness display, and certification as a Microsoft Windows Secured-Core PC.

"The device starts now with Windows 10 Pro. As soon as Windows 11 is available, the end-user is free to update to Windows 11," Panasonic senior product marketing manager Dirk Weigelt told The Register. "And from the end of this year, [or] early next year, we will offer the product, the G2, directly with a Windows 11 licence and pre-installed."

What about alternative operating systems? "One way is what we officially support, which is normally Windows 10 Pro and in the future Windows 11 and the IoT LTSC [Long Term Servicing Channel]," Weigelt explained. "But we know [of] customers utilising Linux on our systems, and with our dedicated engineering team in Europe we're supporting them as best we could from our local perspective to make it happen." 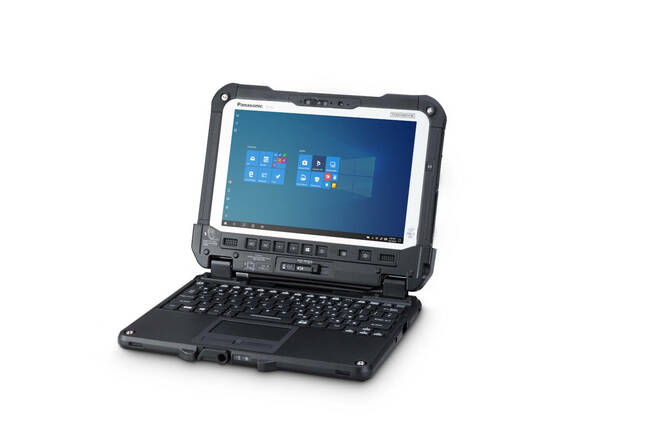 The unit comes with an optional keyboard dock

Other changes from the G1's design include the presence of an embedded SIM (eSIM) when specified with a cellular modem, multi-region global navigation satellite system (GNSS) compatibility, up to 12 hours of battery life from the stock battery and up to 18.5 hours from the optional extended battery, and an optional keyboard dock with backlit keys and an additional USB Type-A and Type-C port on top of the stock tablet's one of each. 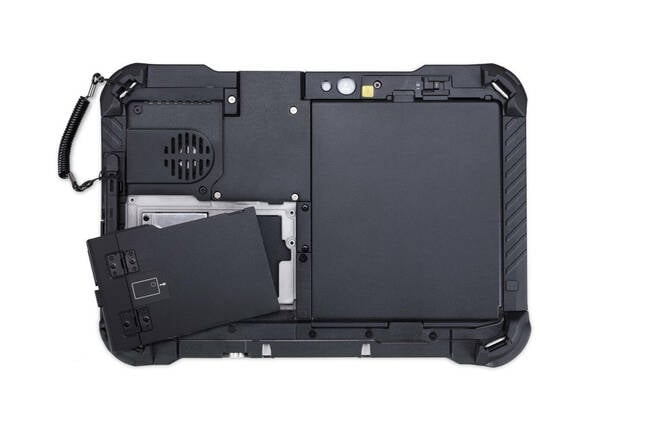 A bigger shift has come in the device's modularity. A "Configuration Port" to the side comes with a choice of add-ons including a second gigabit Ethernet port, an RS232 serial port, an additional USB 2.0 Type-A port, a barcode reader, or even a thermal camera. A "Security Rear Expansion Bay" can accept optional smart card or high-frequency RFID (HF-RFID) security modules. 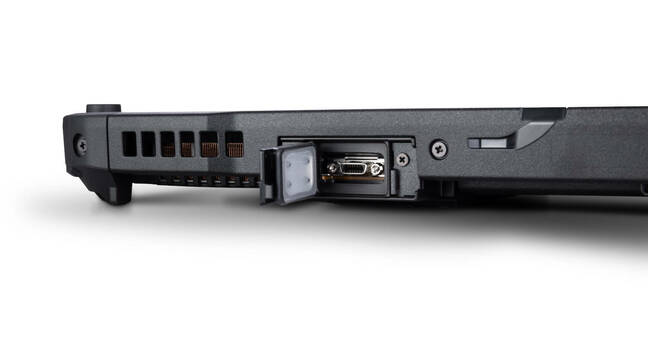 You'll have to make your mind up at the time of purchase, though: while the rear expansion slot's add-ons can be picked up at any time and slotted straight in, the same can't be said for the configuration port. "In terms of the configuration port, this is preinstalled by Panasonic itself or by a certified partner, so this is not end-user replaceable," Weigelt told us, blaming the need for specialised installation to maintain the device's protection against water ingress.

"But we have this second area, which is the rear expansion area, for the HF-RFID and the smart card reader. This can be added and replaced by the end user even at a later stage, and purchased as an accessory."

The Toughbook G2 is due to begin shipping late July 2021, though formal confirmation of its adherence to the MIL-STD 810H requirements won't be available until the completion of third-party testing later in the year. That is, so long as Panasonic can keep a steady supply of the parts it needs.

"It's certainly been a challenge in the industry," Jon Tucker, Panasonic general manager for engineering product and solutions, told The Register of the ongoing chip shortages. "And we've had some challenges along the way, but certainly one of the big pieces of our really focused procurement approach, because of the components that we selected in the product including obviously all of the chips, we have that breadth of supply available to us.

One part in particularly short supply at present is the Trusted Platform Module 2.0 (TPM 2.0), thanks to Microsoft's decision to make the presence of such a mandatory requirement for Windows 11. Panasonic, though, is sanguine: "The unit will always come with a TPM 2.0 chip, a dedicated chip," Wiegelt promised, "as it's part of even the vPro [requirements] from Intel."

Pricing for the Toughbook G2 starts at £2,218 excluding VAT, but depends heavily on configuration and accessories required. On the latter front, some final good news: the G2 is compatible with "the majority of accessories" designed for the G1 and Toughbook 20, Panasonic has promised. ®