A pair of rich white men look set to duke it out at the edge of space after Virgin Galactic was given the green light by the Federal Aviation Administration (FAA) to fly customers to space. 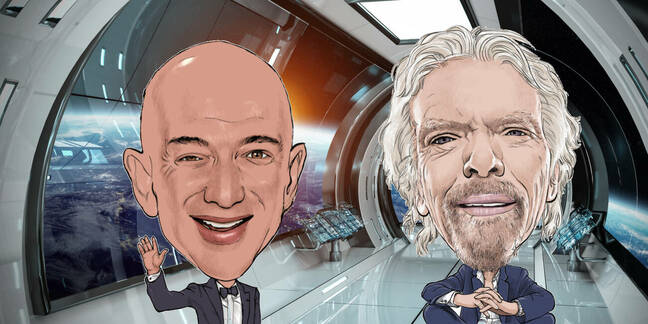 The tweak to the existing commercial space transportation licence [PDF], which Virgin Galactic has held since 2016, permits customers to hop aboard Richard Branson's space jalopy. There is also a possibility that the English business magnate might elect to bring his own flight forward, stealing a march on Jeff Bezos.

The Amazon boss is planning to climb aboard a Blue Origin New Shepard launcher with his brother Mark, and someone who thought $28m was just about the right price for a white-knuckle ride to the edge of space and back while breathing the same rarefied air as the Bezos bros.

The Amazon boss's flight is currently scheduled for 20 July. 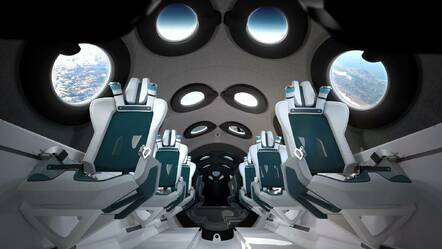 Virgin Galactic's VSS Unity hit Mach 3 and achieved an altitude of shade under 90km during its first powered flight from its New Mexico base on 22 May. A previous attempt was aborted in 2020.

Michael Colglazier, chief executive officer of Virgin Galactic, was delighted with the results of the flight and the nod from FAA, and said: "The flight performed flawlessly, and the results demonstrate the safety and elegance of our flight system. Today's approval by the FAA of our full commercial launch license, in conjunction with the success of our May 22 test flight, give us confidence as we proceed toward our first fully crewed test flight this summer."

Three more test flights remain before Virgin Galactic starts flying its very patient paying passengers. Some, such as Mercury 13 member Wally Funk, put their money down for a ticket almost 10 years ago. The next flight is due to fly mission specialists, Branson will be aboard the one after that, and the Italian Air Force has booked its own jaunt to round out the test programme.

Unless Branson elects to skip the queue and get the jump on Bezos following the nod from the FAA. He is, after all, the founder of Virgin Galactic and, let's face it, not usually one to shy away from publicity. ®