System76 has released Pop!_OS 21.04, based on Ubuntu 21.04 but with a distinctive desktop called COSMIC.

Pop!_OS describes itself as "an operating system for STEM and creative professionals." It uses the GNOME desktop but customised as COSMIC – which supposedly stands for Computer Operating System Main Interface Components, but someone at System76 must like rockets and comic books.

Pop!_OS was born when Canonical, the company behind Ubuntu, abandoned the Unity desktop. The rationale was that Canonical is focused on the enterprise, but System76 is focused on the desktop, as is Linux Mint, another popular Ubuntu derivative. 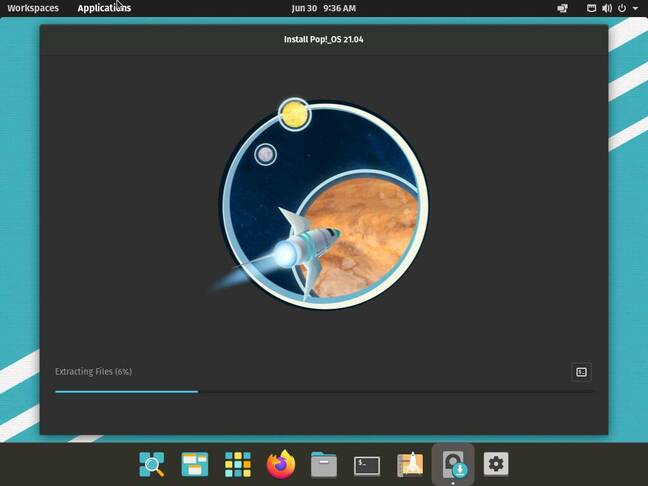 COSMIC is new for Pop!_OS 21.04. One of its key features is the application launcher, which favours a dock (like Window 11) and a launcher (press Windows key or equivalent, type to search) over the standard Applications menu.

According to System76, the Activities Overview, which causes existing open applications to zoom out of view, is slow and distracting when used to open several applications in succession.

The launcher will also switch to an application if it is already running, making it quick and effective for switching too.

Additional features in the COSMIC launcher

The launcher has some other features, with more promised. It can do quick calculations, perform web searches – though not automatically, only with a special prefix – and run terminal commands. For example, type t:df and the df command will open in a terminal, which will close again when the user presses enter.

The launcher also supports plugins for additional customisation. The thinking seems to be to have a strong workflow for keyboard-oriented users without losing the benefits of a graphical user interface. 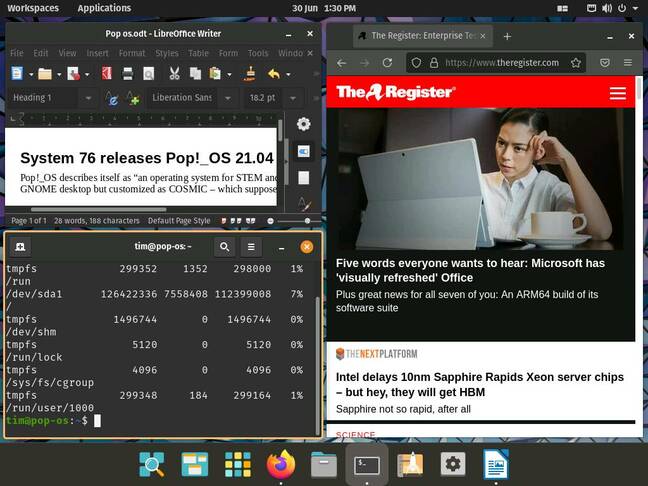 Auto-tiling in Pop!_OS ... not for everyone

Another key feature is auto-tiling, which "manages the window layout for users rather than users managing all those floating windows themselves," said System 76, though this is off by default. The subject evokes ancient debates about the pros and cons of overlapping windows, which can be both messy and confusing, especially if one window completely hides another.

When enabled, auto-tiling will do what its name suggests – tile windows automatically as the user opens and closes applications. There are options for defining exceptions so one could have LibreOffice, for example, always float. We found this feature needs caution since mixing the tiling and floating approaches does not work well.

Another issue is that windows which have a minimum size larger than the space available will overlap other tiled windows. Tiling does work well though with workspaces – multiple desktops – since if a tiled application is too small, it can be dragged to a new workspace where it becomes full-screen, or added to an existing one.

All the above is customisable so users who prefer the GNOME Application Overview can use that and/or hide the dock completely.

Pop!_OS users do not have long to upgrade. Version 20.10, the previous release, goes end of life in July and security updates cease. Users are advised to backup and then upgrade through an Upgrade & Recovery menu. The enforced immediate upgrade is not ideal since failures are possible and disruptive to productivity.

That said, the impression we have from a quick try-out is that Pop!_OS is quick and productive while also looking relatively polished, though auto-tiling is not for everyone and we turned it off. The operating system is designed primarily for System76 hardware, which may account for optimisation for the laptops which form the bulk of the company's range. There is support for gestures, for example, which are well suited to the System 76 multi-touch trackpads.

The operating system is open source on GitHub and should run well anywhere that Ubuntu 21.04 runs. ®