These things really get my goat

Something for the Weekend, Sir? "Sign with the devil here." Do what? "Church of Satan. Jot your name on the form and we’ll email you details."

That’s nice, I say, being able to register for demonic influence sent straight to your inbox. 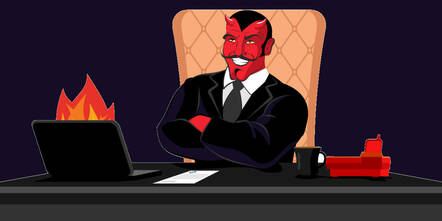 "Oh no no no, not at all. We don’t do demonic stuff." The church-goer explains that satan represents free thinking and alternative lifestyles, and it’s these things that they worship. He’s very keen that we join. Not evangelical, of course, but not particularly, er, evdemonical either it turns out.

So, no sashaying around in a red kaftan in a crumbling mansion cellar? No skyclad frolics with delirious virgins under a full moon? Not even a bit of dubious goat-worrying?

"No." He looks disappointed when he says this. We both know Dennis Wheatley queered this pitch 90 years ago. Sigh.

Devil-worshipping hipsters aside, it’s a matter of some conjecture why Wheatleyesque baddies were so determined to bring the world to an end. What would be the point? So you can stand back, hands on hips and say out loud with a satisfied air "Now, that was a job well d…" as the world ended before your sentence could? Or was it the journey in getting there? If that was the case, I’d have shifted the emphasis in favour of skyclad virgins and dispensed with the goat-worrying altogether.

The real occultists of the early 20th century did it for the love of sheer chaos: the desire to (literally) raise Hell for the (literally) Hell of it, and bugger the consequences. And the goat, probably (literally).

Hmm, this rings a bell. Doing stuff for the Hell of it with no real thought of the consequences… Isn’t this the very definition of disruptive design? Isn’t this the core value around which the whole modern IT industry revolves these days?

Evil entering the physical plane "from beyond" via the Demons of Disruption can be obvious or subtle, deliberate or accidental, knowing or unaware. Apple recently had to admit to all of these in one go once the company became aware that a number of its gadgets inadvertently risked interfering with medical equipment. Yup, we all know we’re not really supposed to blab into our mobile phones while wandering around hospital wards looking for grandad after his heart op, but possibly we hadn’t imagined that slipping an iPhone 12 into his top pocket might actually halt his pacemaker.

This would have made a great episode of Columbo – Think Different for Death. How did the killer do the deed without even making a phone call? You can imagine the ironing-challenged detective getting flustered with a smartphone and finally cracking the case with the help of a 13-year-old "computer whizz" called Randy who, it turns out, is also the only person in Los Angeles who knows how to disable Maps notifications from asking him if he’s on his way to work.

It’s easy to snicker at Apple having to admit its products are potentially harmful to one’s own health, and not just to the tinfoil hat brigade. The road to Hell is paved with good intentions and all that. It’s certainly a far cry from the digital baddies hacking into our digital wallets to steal our digital cash. On a related note, this report is intriguing in that it seems to suggest that Lt Columbo is significantly less hackable than young Randy because the crusty one-eyed crime-solver doesn’t have the faintest fucking idea what a digital wallet is but he suspects Mrs Columbo might have one.

On the other hand, Randy probably escapes the clutches such modern evil-doers by virtue of being a virgin. In old-school devilry, this would have made him a marked kid; in the modern world, being too young to have a driving licence for hackers to counterfeit is his salvation. Good for virgins, bad for the wicked, and I fear the latter may be taking it out on the goats.

Evil is relative too, and many do-badders have absolutely no idea what they’re doing might be frowned upon. A story all over the regional newspapers here this week concerned a children’s slide vanishing from a council playground only to turn up – hastily repainted in a different colour – in the garden of the council’s deputy mayor. Apparently there had been a problem with the slide and it needed fixing or replacing, so the councillor responsible for getting it fixed or replaced must have thought "Sod it, I’ll take it home and slap on some cheap red paint before anybody finds out."

Reading the news reports, you’d think it had been the crime of the century.

The most insidious of evils, however, is the innocent repetition of promises that are never quite delivered: perpetual near-completion masked as achievement. You know those nightmares where you are running down a corridor but never reach the end, or almost finish your exams only to find you have to repeat a year of school?

These engineering projects are no more likely to be fulfilled than all those that came before – we know this from experience, time and time again. But we allow ourselves to be persuaded that "this time, it might". It won’t. This is torture from the very depths of Hell itself.

I’m starting to wonder whether buttering up the devil with a bit of hero-worship in the Church of Satan might make him let one of these never-ending projects actually achieve its goal. You know, a bit of flattery, he turns his horned head and whoops! – the next thing you know, he’s let something slip by.

The flying car would be good but I don’t want to be too demanding. Maybe he could just let Apple install enough USB-C ports. Or let Huawei update the version of Android on its old handsets. Or, Christ on a bike, allow Evernote to release the features of its next version all at the same time.

My devil-worshipping hipster is still staring at his own shoes in contemplation.

"You know," he muses, "if you want to spread evil across the face of the Earth, you no longer need to summon demons." He brightens up a bit as he warms to the theme: "You just get a job in finance!"

Or in IT, I suggest helpfully.

Alistair Dabbs is a freelance technology tart, juggling tech journalism, training and digital publishing. He hopes Neil Gaiman is not indulging in a bit of Hellish teasing by announcing a second series of Good Omens supposedly based on his midnight conversation with Terry Pratchett in the 1980s. Mind you, if he is, it would be totally on-message. More at Autosave is for Wimps and @alidabbs.