Staggered keys, your days are numbered

Enthusiasts of radical ergonomics, high-speed coders, and keyboard hipsters have cause to rejoice: the market will soon boast the world's first laptop with an ortholinear keyboard layout, thanks to not one but two aftermarket upgrades.

The ortholinear layout, named for the Greek "orthos" meaning straight or rigid and the Latin "linear" meaning... well, straight, again, does away with the traditional staggered key layout traceable back to the original mechanical typewriters in favour of a simple grid.

This, its proponents claim, offers improved ergonomics, reduced finger travel, and faster typing – once you're used to it, of course.

While external ortholinear keyboards are readily available, laptop users have been left out in the cold – despite at least some demand, as proven by a request on the Dell community forum asking the company to release an ortholinear version of its popular XPS laptop family.

What the original equipment manufacturers won't provide, enthusiasts have opted to make themselves. OLKB, which makes a range of external ortholinear keyboards, has announced it's working on a swap-out keyboard for the MNT Reform open-hardware laptop.

Unveiled by designer Lukas Hartmann three years ago, and treated to a second edition last year, the MNT Reform is a modular laptop which is as fully open as possible – from its source code to its motherboard.

Users are encouraged to modify and tweak the device as much as they like, replacing everything from the computer-on-module (COM) which powers the laptop – currently a modest ARM-based COM spec, with higher-performance and RISC-V models in the pipeline – to, of course, the keyboard.

By providing design files and full mechanical measurements for both the chassis and the stock keyboard, Hartmann's MNT Research has made it easy for people to design their own replacements – which is exactly what OLKB has done. 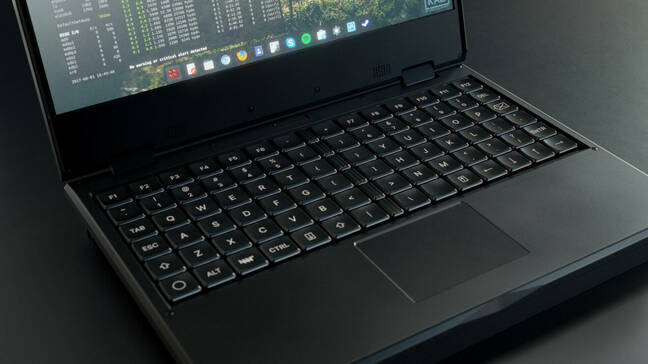 Announced by OLKB founder Jack Humbert, the project – currently in the planning stage – will see the development of an ortholinear keyboard designed to mimic the appearance of the stock model, bar layout, as much as possible.

"A compatibility keyset will be paired with the kit, allowing you to use the keycaps that came with the original to save on costs. Full keysets will also be available. Both keysets will feature extra keycaps for customisation."

As well as being compatible with the MNT Reform laptop, the OLKB ortholinear keyboard will be usable as an external USB device through installation into the MNT Keyboard chassis. It is designed to take a stock MNT Reform keyboard as a means of providing continuity between devices for those working on both an MNT Reform and a traditional desktop.

There's a race on to be the first to market with an ortholinear laptop keyboard replacement, however. As well as the OLKB kit for the MNT Reform, Modulo Industries is working on a similar drop-in keyboard for selected Lenovo ThinkPad devices. It has offered a few upgrades over the OLKB equivalent, too, including a TrackPoint-style mouse input and the ability to split the keyboard in two when using it as an external device.

While it's not yet clear which will launch first, there's undeniably a bigger market for the Modulo Industries variant: a crowdfunding campaign for the MNT Reform laptop sold 331 units, split between a ready-to-run assembled version called the MNT Reform Max and a cheaper bare-bones kit-form model, compared to the literal millions of ThinkPads Lenovo flogs each quarter.

OLKB has solicited feedback on the design via this form, but has not yet put a price on its add-on – Modulo Industries likewise.

Not everyone is convinced as to the benefits of an orthlinear layout, laptop or otherwise. "Demand [for ortholinear keyboards] is quite low,” Bruce Whiting, managing director of The Keyboard Company, told The Register. “All rounder 'ergo' models, split and curved, in the mainstream tend to do better - ErgoPro, Goldtouch and the like - but that's a lot to do with marketing, availability, and user awareness.

"Keeping switches in lines has some obvious advantages, but as an overall solution I think there is a lot more to it than that and I'm not sure the sideways finger movements we normally make are much of an issue for most people.

"Wrist cranking, wrist twisting, leaning, slouching, stress, general poor posture and lifestyle can all come into the equation, we find that talking to users, they all have different issues, so I'm never saying 'This is a must-have.' It's more like selling shoes - horses for courses." ®