It seems that the monstrous irradiated boar-pig hybrids that we featured in an article last week have broken out of their former home in the exclusion zone around the destroyed Fukushima nuclear plant and are now running riot around the internet.

Indeed, the boars in question have moved on from stealing laptops from unsuspecting German nudists and mounting surprise amphibious attacks on holidaymakers to enchanting web users and planning movies about their life stories.

Social media users have embraced the angry porkers and have been displaying their affection by creating jokes, memes, and fan art about them, and changing their Twitter handles to either reflect their concern or support for the pigs.

An emotional support radioactive hybrid terror pig for anyone who needs one during these trying times. pic.twitter.com/yeZYtlAAM7

A number of users felt that "Radioactive Hybrid Terror Pigs" should be taken up as a band name, with punk, hardcore, and metal being the most favoured genres for any group thus named. It would, admittedly, be a strange choice of name for a boy band. There was also considerable support for naming groups "Fukushima Exclusion Zone".

Radioactive Hybrid Terror Pigs is 100% a band Spotify would recommend me https://t.co/mCxQ1Og0EQ

That was Radioactive Hybrid Terror Pigs with the title track from their latest LP, Fukushima Exclusion Zone, and I think I may have played it at the wrong speed. Anyway, here's The Fall. https://t.co/5U7LZBRjnM pic.twitter.com/qTUTNuKSZ8

Other users suggested the pigs should be replacements for the Teenage Mutant Ninja Turtles since the pigs share a similar origin story to that of the pizza-loving reptile vigilante group.

This is a commercial possibility for anyone who fancies buying the rights as there is currently a big, Turtle-shaped hole in popular culture the pigs could fill. Rights to the Turtles' intellectual property are fractured [PDF], meaning the franchise is presently languishing between different companies in several different creative areas.

Some even went as far as to adapt the famous logo from the 1987 Teenage Mutant Ninja Turtles cartoon series to see how the name would look, with others trying to modify the "Radioactive Hybrid Terror Pigs" title to fit the Turtles' theme song better.

just. What the fuck is going on here? pic.twitter.com/pjMNeSjhAE

The similarity of the terror pigs' origin story to that of the Turtles' slapstick stock enemy Bebop, who is also based on a wild boar, did not go unnoticed.

The origin story for the pigs was also not lost on the numerous Twitter users who suggested that radioactive hybrid terror pigs were a step towards creating actual, honest-to-goodness orcs.

I feel like these are just a few fungi spores away from being actual orcs. https://t.co/bIlX1c5Xb1

Some commenters suggested that the story of the terror pigs might be good material for a film. We at The Reg feel that this is entirely plausible, given that the story is not a million miles from the plot to the Oscar-nominated Beasts of the Southern Wild.

The resulting movie would almost certainly be a deliberately terrible B-movie sci-fi/horror flick, however, in the style of Snakes on a Plane or the Sharknado and Birdemic franchises, most likely starring Debbie Gibson, who appeared in the most decidedly non-Oscar-nominated Mega Shark vs Giant Octopus, so must enjoy this sort of thing.

One terror pig fan, designer Laurent Graudens, even went so far as to create a poster for the proposed movie, referencing both the B-movie genre and Japan's love of monster movies by calling it Boarzilla. It is a thing of tremendous beauty indeed and would look outstanding on a wall or a T-shirt. 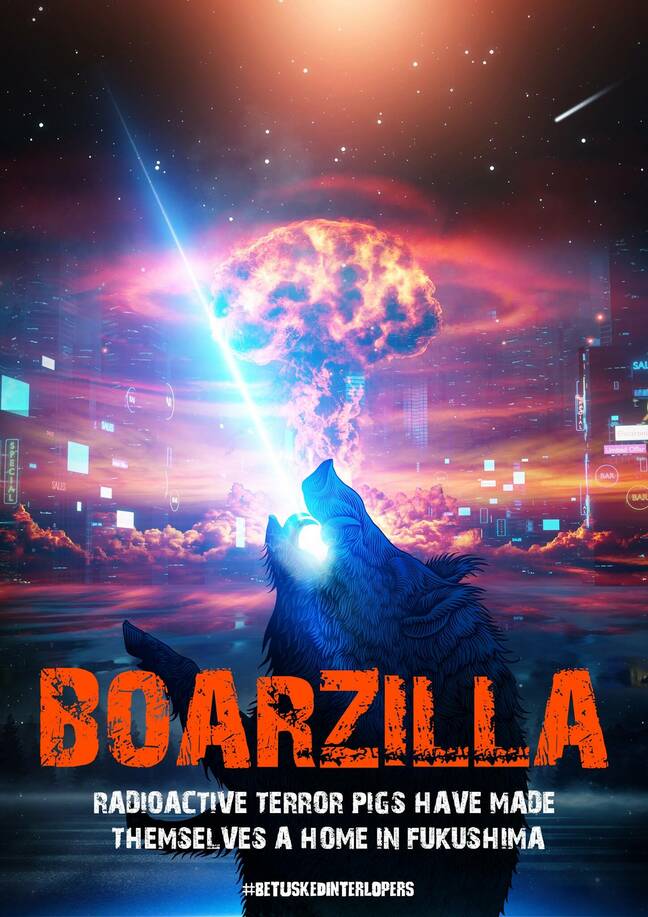 If anybody fancies making this movie, I would obviously be happy to work on concept and scripting for a suitably gargantuan fee.

We asked the boar for comment or a word for their fans, but their agent said they don't get out of bed nowadays for less than ten grand and a bushel of acorns. ®