Bumpy ride of a keyboard - but that's kind of the point

Review This reviewer's desk is a temple of the mechanical. I like my keyboards, and I like them clicky and with oodles of tactile feedback. And yet, for the past couple of weeks or so, I've been using a bog-standard scissor-switch keyboard.

Specifically, the Logitech Ergo K860, a split ergonomic keyboard designed to take the strain from desk-bound life. It's an unusual duck in many senses, not least its design. Imagine a normal full size keyboard, but with a convex bend in the middle. That’s basically it.

That slight bump looks awkward, but allows you to type while limiting the amount of movement your wrist does over the course of the day. Another adjustment that might feel off is the way it allows you to change the elevation angle of the keyboard, albeit with the legs positioned at the front, and not the back.

Yeah, it's a bit weird, and it takes some getting used to. At first, you might struggle to type with the same cadence you otherwise would with a normal keyboard. Subtle muscle memories needed to be re-learned. There is no way to circumvent this, other than through sheer dogged determination. At times, I was frustrated.

But eventually, I climbed the hill and found myself typing at my previous speed. And I did find it weirdly comfortable. Those throbbing pains that crop up throughout the working day and tell you to take a break were less common. This was possibly also thanks to the wide memory foam wrist rest, which adorns the lower third of the Logitech Ergo K860.

As mentioned, this isn't a mechanical keyboard, instead it uses Logitech’s PerfectStroke scissor key switches. These feel like those on a normal laptop, from the sensation you get when the key bottoms out, to the comparatively low amount of travel.

This isn't likely to be a deal breaker for anyone who furtively obsess over the comparative benefits of Cherry and Gateron keyswitches. Although it lacked the auditory and tactile feedback some of us enjoy, it was nonetheless satisfying enough to use long-term.

Still, we question the wisdom of including the number pad, rather than going for a compact “tenkeyless” (TKL) layout. It almost defeats the purpose of having a design intended to limit wrist and hand movement, as you instinctively reach for the number pad when the time comes to write down some digits.

And that also means it takes up a disproportionately large amount of desk space, which fortunately was not much of a problem for me, although could prove limiting for others.

Logitech scored points for including both Windows and MacOS layouts, which are easy enough to switch between, and you can use the Ergo K860 across three devices simultaneously. Logitech offers two options for pairing: A unifying receiver that also works with compatible peripherals from the Swiss peripherals firm, and bog-standard Bluetooth.

There is no rechargeable battery, with power coming from two AAA cells. Logitech claims these provide up to two years of battery life, although for obvious reasons, we haven’t been able to independently test this.

At the time of writing, Logitech was selling the Ergo K860 for £109.99. This is fairly pricey, but not oppressively so, with the excellent Logitech MX Keys in the same ballpark. Still, if you are committed to the mechanical space, you have options. 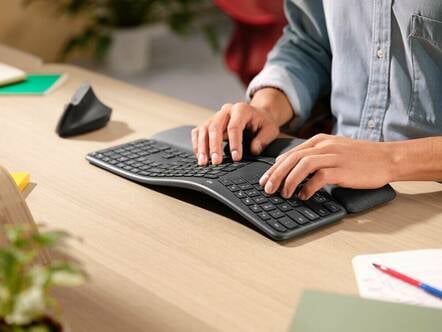 This reviewer is a big fan of the Ergodox EZ split keyboard, which gives you a variety of keyswitch options, and takes up a tiny footprint on your desk. This ain't cheap though, and you can expect to spend over $350. Incidentally, Ergodox recently launched the successor to the EZ, dubbed the Moonlander. We haven’t tried this yet, but it’s on our wish list.

If you don't fancy a split keyboard, there is always the Vissles V84, which we reviewed recently. With a price under $100, Bluetooth connectivity, and support for Windows and Mac, this compact mechanical keyboard might work for you. ®