A human-free autonomous boat known as the Saildrone Surveyor has successfully sailed from San Francisco to Hawaii to cross the Pacific Ocean while mapping the topography of the seabed, an achievement made less than a month after a similar IBM-powered boat failed.

The Saildrone Surveyor, 22 metres long and and weighing 12,700 kilograms, sailed 2,250 nautical miles over 28 days to map 6,400 nautical miles of seafloor. The project is the largest attempt yet to map Earth's undersea landscape; we have mapped the Moon more than our planet's deep oceans.

The boat uses a 360o camera to record its surroundings. These images are then processed by GPUs running computer-vision neural networks to detect objects, Saildrone said.

There are several other types of sensors onboard, ranging from radar to infrared to navigate in the dark, and it is powered by wind and solar energy. Saildrone trained its machine-learning systems on data recorded from sailing journeys stretching a total of over 500,000 nautical miles across 13,000 days at sea. 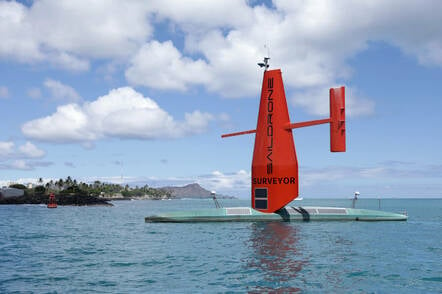 “This successful maiden voyage marks a revolution in our ability to understand our planet,” CEO and founder Richard Jenkins, gushed in a statement. “We have solved the challenge of reliable long-range, large-payload remote maritime operations. Offshore survey can now be accomplished without a large ship and crew; this completely changes operational economics for our customers.”

Saildrone will now focus on expanding its fleet with the aim of mapping the entire ocean floor in ten years. But sea research isn’t all the company has its eyes on. Jenkins said he wants to expand Saildrone Surveyor’s technology to other industries including security and defense, too.

There are numerous ongoing projects to sail AI autonomous ships around the world. IBM’s Mayflower ship attempted an ambitious transatlantic trip from England to the US last month. Unfortunately, it only lasted three days at sea before it broke down and had to return home to get fixed. ®

Contributors will have to disclose whether their work was made using AI, and are not allowed rip off artists
AI + ML6 Dec 2022 | 3