BOFH: Where there is darkness, let there be a light

Where two or more idiots are gathered together, try to reduce the number of idiots

Episode 11 The Director and the Head Beancounter are waiting for me outside Mission Control when I get to work – which is never a good thing. When two or more idiots are gathered together and all that.

“It’s about the asset register,” the Head Beancounter says.

“Didn’t we cover this weeks ago?” I ask. 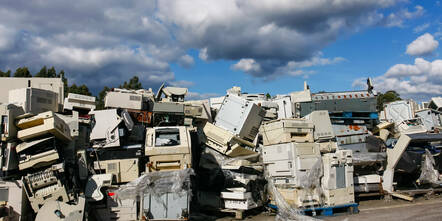 “I’m not concerned about some missing equipment – I have to report the book value of current assets,” the Head Beancounter says. “We don’t have a clear picture of what equipment the company actually owns because no-one knows exactly what was bought, for whom, and what was disposed of.”

I suppress the urge to point out that the PFY and I took a HELL of a lot of stock, and our eBay store can attest to that.

“We may never fully know what our asset base is,” I say, shaking my head and feigning concern.

“Yes, that’s the point,” the Head Beancounter says. “We NEED to know. We have to find out exactly what assets we have so as to report a correct figure on the books. 2019–21 were unprecedented financial years and we need to be able to report the true impact financially, as well as working through our assets to see what we need to write down or write off.”

I suppress the urge to point out that the PFY and I wrote off the company van a few nights ago during a particularly rushed “stock take” and that it’s currently parked in the darkest corner of B2 on top of an ever-widening pool of oil.

“We think we need an IT inventory,” the Boss says, pausing before adding: “of everything.”

I don’t need to tell you that inventorising our IT assets is a Sisyphean task which would have even the most upbeat of people reaching for a stout cord and a wobbly chair. It’s the sort of poison chalice that tends to get handed to the most annoying of interns in the hopes that they’ll choose to exit the company without a fuss.

“Mistakes were made,” the Boss continues. “We realise there may have been some undocumented disposals, possibly some shrinkage, and more than likely some assets which were not brought into the asset register in a timely manner.”

“What gear are we talking about?“ I ask. “The stuff onsite or offsite?”

“Everything the company purchased between the first of July 2019 and the 31st of June 2021. Plus all assets on the register beforehand, along with all disposals.”

“So you want someone to check off every IT item in the register?”

“You realise that it’d be cheaper for us to throw away all keyboards and mice because the replacement cost would be less than the labour involved.”

“That’s not going to work!” the Head Beancounter says. “We have to be able to assure the Board that we have all the equipment we say we have. One of them is talking about random checks.”

“In circumstances like this I generally choose the road less travelled,” I say.

“Insurance fire. Douse everything in isopropyl and fire starters and set it alight. Tell the Board you were reorganising the whole building to make it more power efficient when the tragedy struck.”

“You can’t just set fire to your problems!” the Boss snaps, just as the fire alarm starts sounding.

I resist the urge to dispute the Boss’s point by taking him down to B2 to see a burning van.

“They tell me you’ve managed to inventory our items,” the Head Beancounter says, having been let into the server room by the Boss. “How many items did you check off?”

“All of them,” I respond. “There’s only three items left on the register: the UPS over there, the ancient Building Management server, and the espresso machine in our office – though I think that was misfiled as an IT item.”

“That’s preposterous! What about that server over there?”

“It doesn’t have an asset number on it.”

The Head Beancounter looks on the front panel, noting a sticky smear around the same size as one of the company’s inventory labels.

“You must be able to look it up by serial number!”

“It looks like the serial number has been ground off. Hey, maybe it’s stolen!”

“What about THAT server then?”

“Same! In fact, it looks like all our gear must be stolen.”

The Head Beancounter realises what the PFY and I realised several years ago – that half an hour with an angle grinder beats a couple of weeks of label checking. He’s a bit shirty, but he recognises an impasse when he sees one.

“Someone’s got to account for this. We can’t just write off all our IT equipment. The Tax Department wouldn’t buy it for a start.”

“Sure they would!” I reply. “We’ve got a huge room in the basement crammed full of old IT equipment.”

“How much equipment?” he asks, seeing a possibility to finesse himself out of a difficult corner.

“It’s a bit grim,” the Head Beancounter says, once we get down to the basement and switch the lights on to reveal masses of e-waste we’ve stockpiled over the years.

“And what’s that horrible smell? No-one’s ever going to believe that this kit is … >pop< What happened to the lights?”

I resist the urge to tell him that the horrible smell is a mixture of tar, isopropyl and diesel as I step back through the door just as he’s reaching for his lighter …