HALO to form the crew habitat module of the Gateway outpost

NASA has inked a $935m contract with Northrop Grumman to build the Habitation and Logistics Outpost (HALO) module for the Lunar Gateway.

The contract will also require the aerospace outfit to integrate the module with the power and propulsion element being built by Maxar Technologies.

HALO will be both a crew habitat and, with three docking ports, a hub for visiting spacecraft. Derived from Northrop Grumman's Cygnus freighter, used to ferry cargo to the International Space Station (ISS), it won't be the most expansive of pressurised spaces (certainly when compared to the ISS) although will be expandable via additional modules (including the International Habitation Module – slated for launch in 2026). 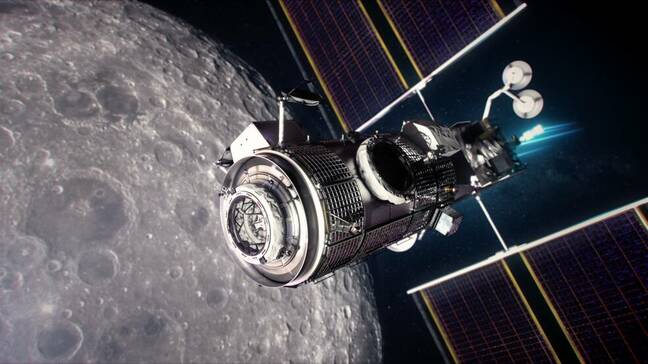 Illustration showing close-up of HALO, one of the elements of Gateway. Credit: NASA

The module will also play host to NASA's Orion spacecraft, lunar landers, and logistics vehicles. NASA described the size as about that of a "small studio apartment" when it awarded Northrop Grumman with a $187m contract to design the module in 2020.

A critical design review will take place in 2022. Delivery of the HALO module to the launch site is expected in 2024 for a November launch atop a SpaceX Falcon Heavy rocket.

NASA Administrator Bill Nelson said: "The HALO is a critical component of Gateway, and this exciting announcement today brings us one step closer to landing American boots on both the Moon and Mars."

The Gateway, of which the HALO is a part, will be in a near-rectilinear orbit that will bring the complex within range of lunar landers at its closest to the Moon and tens of thousands of miles out at its farthest.

NASA is supposed to have boots back on the Moon by 2024, but that goal looks increasingly unrealistic as time goes by. That said, the agency has continued to make progress with its own monster rocket, the Space Launch System (SLS), and last week stacked the Interim Cryogenic Propulsion Stage (ICPS) atop the SLS.

The single RL10 engine of the ICPS will be responsible for sending the Orion spacecraft (and its European-built service module) to the Moon on the first uncrewed launch of the SLS. NASA continues to target a 2021 launch for Artemis 1. ®