Went into space and made it home in time for lunch

British billionaire Sir Richard “Beardy” Branson on Sunday made a round trip of just over 170 kilometres in around 90 minutes.

The entrepreneur used two planes to make the trip. The first, an unusual twin-fuselage, four-engine affair named “VMS Eve” took off at around 10:40AM on Sunday, carrying the second plane, a rocket-propelled craft named “VSS Unity”, on a flight named “Spaceflight Unity 22” to denote the 22nd use of the two vehicles.

VMS Eve took a leisurely 50 minutes climbing beyond 50,000 feet (~16km) before releasing VSS Unity. Six seconds later, the latter’s rocket engine ignited and propelled the craft to a speed of Mach 3.5 and into a parabolic arc with an apogee of 53 miles (85km).

Among the images returned to Earth from the journey are the one below, depicting the view of VSS Unity’s tailcone from space. 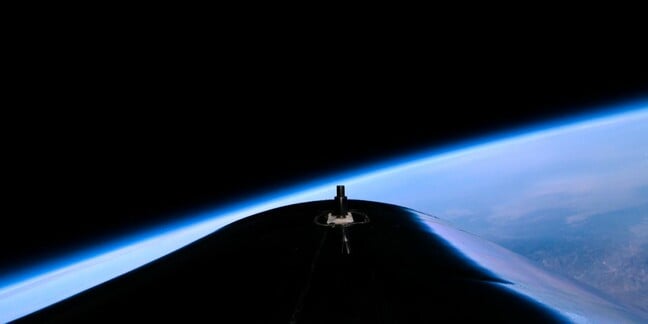 The craft and crew of two, plus four passengers, briefly experienced weightlessness before gliding back to land at Southwest Regional Spaceport. The round trip took around 90 minutes.

“Today is a landmark achievement for the Company and a historic moment for the new commercial space industry,” said Virgin Galactic CEO Michael Colglazier. “With each successful mission we are paving the way for the next generation of astronauts.”

I was once a child with a dream looking up to the stars. Now I'm an adult in a spaceship looking down to our beautiful Earth. To the next generation of dreamers: if we can do this, just imagine what you can do https://t.co/Wyzj0nOBgX #Unity22 @virgingalactic pic.twitter.com/03EJmKiH8V

Two days before take-off, the flights generated a green-eyed tweet from Blue Origin, the rocket company owned by billionaire former Amazon CEO Jeff Bezos, who plans go on an even longer round trip later this week.

From the beginning, New Shepard was designed to fly above the Kármán line so none of our astronauts have an asterisk next to their name. For 96% of the world’s population, space begins 100 km up at the internationally recognized Kármán line. pic.twitter.com/QRoufBIrUJ

Bezos funded Blue Origin by selling Amazon stock, while Virgin Galactic has attracted numerous investors. Branson resides in the British Virgin Islands, a jurisdiction that the CIA notes possesses a “large offshore financial center [that] makes it vulnerable to money laundering” and is widely regarded as a tax haven. ®