v1.58 is a sizeable update that also brings terminals in the editor

Microsoft has released version 1.58 of Visual Studio Code with the ability to open terminals in the editor panel and an official integrated web server extension.

VS Code updates monthly but this release is perhaps bigger than usual. Microsoft has made some small tweaks to the Workspace Trust feature that some find intrusive, where the editor distinguishes between trusted and untrusted folders and restricts code in untrusted folders to make it safer to work with.

"We believe it is important that developers can safely browse code, even when they are unfamiliar with the source," said the team in the release notes for 1.58. Not much has changed, though there is a new option to disable the Restricted Mode reminder banner, and the settings are easier to find thanks to a new link in the user interface.

The VS Code terminal can now be part of the editor area and there are new commands to "Create terminal in Editor Area" or "Move terminal to Editor area". This then means developers can tab between a code file and a larger terminal view, or open multiple terminals in separate panels, though it is also a bit odd since conceptually it mixes an edit space with a command space. 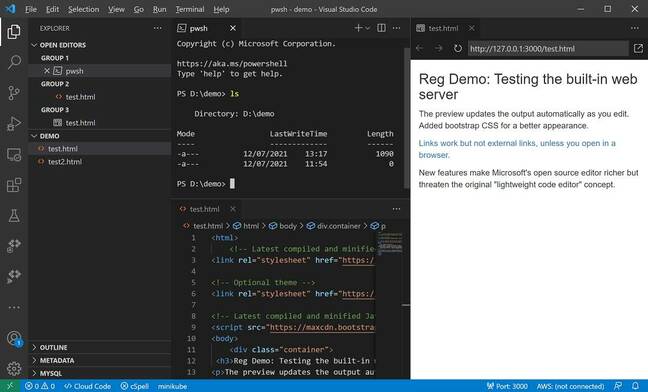 Visual Studio Code 1.58 including web server extension and terminal in the editor

How scroll bars should behave is a matter on which views vary. VS Code 1.58 now offers some choices, specifically to control the visibility of the scrollbars (separately for vertical and horizontal), the width, and what happens when you click: by default it jumps to that position in a file, but it can also be set to page up or down.

Other changes include Math support in markdown files so that equations are rendered nicely; control over the maximum number of search results; and transient workspaces that are not automatically reloaded. There is preview support for TypeScript 4.4. Work on supporting Jupyter notebooks has continued, with debugging enabled experimentally in notebooks, and an option to use the full features of the VS Code editor for interacting with Python code. 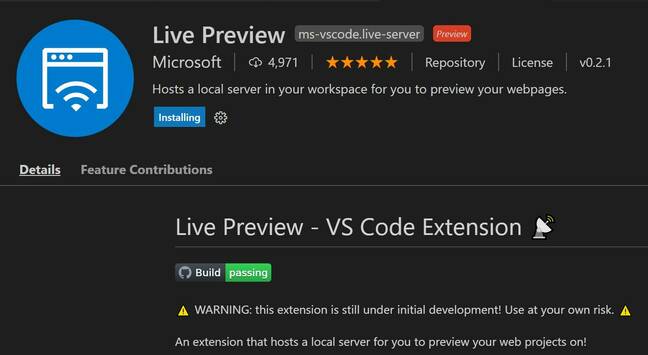 There are also some changes to key extensions. One is a new first-party extension called Live Preview, currently marked experimental, which provides an integrated web server with an in-editor browser. This is aimed at web projects "where a server is not already created," the docs explain, so it is not suitable for React or Angular projects, nor will it run PHP, Java or ASP.NET.

The extension is quite capable for running JavaScript, rendering CSS, and so on. The preview updates as you type. It is also possible to open web pages in an external browser, with the same auto-refresh characteristics. A verbose options lets developers view the server traffic. While the web preview looks useful, the idea is not new and there is an existing Live Server extension by Ritwick Dey with more than 13 million installs, according to the VS Code statistics. The implication, perhaps, is that the feature is too important to be entrusted to a third party.

As new features pour into VS Code the notion of it being a lightweight editor is in danger of being left behind, with the provision of an official built-in web server being the latest example. On the other hand, it is an extension and does not have to be installed. But it does reflect the huge take-up for the utility and the pressure on the team to do all things well. ®