Helicopters on Mars have captured the imagination of nerds everywhere, however, an even more ambitious mission to return samples from the Red Planet to Earth is gathering pace.

The Register spoke to Paul Meacham, engineering manager for the ExoMars rover, about current and future missions when we both attended the Future Lab exhibition, in front of a mock-up of a Mars rover.

He started with an update on the latest tests of the parachute system, to be used in the landing of the ExoMars Rosalind Franklin rover and a factor in the decision to delay the launch that was originally planned for last year.

This time around, ESA declared the test a success, noting only minor damage to the second stage parachute, "but not anything that would endanger the robot, which is the critical thing," said Meacham. "Compared to where we were a couple of years ago, where there were fundamental design problems, this is what I would call a very successful test."

"It's a very expensive payload, and we want it to work," he added.

The Rosalind Franklin rover is currently set for launch in September 2022 with a landing in June 2023.

However, by that time work should be well underway on another project – the altogether more complicated NASA-ESA Mars sample-return mission.

The Perseverance rover currently rolling around the Martian surface is to collect samples, which will be left behind for retrieval. In 2026, another rover, atop a NASA lander, will be launched with a planned touchdown near Perseverance in 2028. The rover will collect the deposited samples and deliver them to the lander, which will launch them into orbit around Mars in 2029, where an ESA-built Earth-return orbiter will be waiting. Having collected the samples, the return cannister will then head back to Earth for a 2031 landing.

Having had the experience of building the Rosalind Franklin rover, Meacham's team is hopeful of being awarded the contract for the Sample Fetch Rover which, he told us, would reuse some elements of its predecessor, but dispense with others.

"There are not many scientific instruments on it all," he explained, "it's purely for delivery: fetch the samples, bring them back." 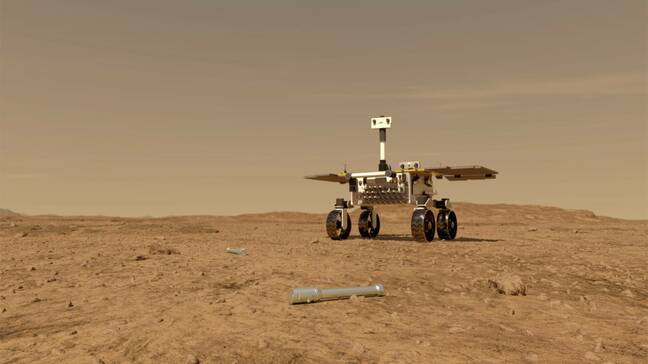 The rover will also be trundling at quite a lick. Meacham told us that the nominal case was 150 sols to do the collection and get back to the lander, a potential trip of 15km he said. "We'll be travelling three or four times as fast as the ExoMars rover did. But then, of course, we don't have quite the same weight."

As well as knowing exactly where to go, the rover will also deviate from the six-wheelers of old in favour of four larger ones and, unlike its predecessor, will have an arm to collect the samples. As for dropping those samples at the NASA-built lander, the plan currently calls for another arm on the lander to extract the dirt containers and load them onto the rocket for launch.

Solar power is the order of the day, something that did for earlier rovers and is causing headaches for NASA's InSight lander. Could dust somehow be removed?

"We have dabbled in this," said Meacham, "the original concept for the ExoMars rover was that it could actually tilt its solar panels to allow dust to effectively run off it.

"In the end, it came down to a piece of analysis that showed the complexity and the difficulty of doing that wasn't worth the benefit."

Dust removal is also not currently on the cards for the Sample Fetch Rover either: "the easiest way to deal with it is to oversize your arrays for a certain level of dust by the end of the mission." And the mission will, by its nature, be short. The team also has a far greater understanding of dust levels from previous missions.

The rover is only one part of a hugely ambitious and cross-agency project, designed purely to bring back a few grams of Martian soil to Earth. NASA is providing the lander and launch services and, appropriately for the Goodwood Festival of Speed, Meacham's team will hopefully be supplying a trundlebot capable of considerably more rapid progress than its predecessors. ®

'Magnetic' design framework, already deployed in Meraki kit, will make it to other products in coming years
Legal7 Dec 2022 |