The immediate impact of the deal will be NEC migrating all its on-prem infrastructure into Azure, and “deploy Azure Virtual Desktop and other Azure services among the NEC Group’s 110,000 employees worldwide”.

Neither NEC nor Microsoft has said why the virtual desktops will be deployed, nor what it means for the Japanese firm’s operations. But in a video announcement of the new alliance, Microsoft CEO Satya Nadella and NEC CEO Takayuki Morita both spent a lot of time talking about the importance of using technology to create “personalised work styles” that transcend location and include plenty of video collaboration. 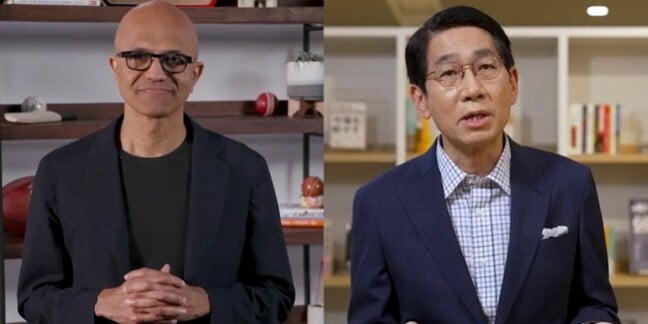 Delivering that kind of thing is the intangible part of the deal. The two companies suggested that NEC’s private 5G networking capabilities, plus Microsoft 365 and the software giant’s edge expertise, will make it all possible.

Both companies also possess AI and IoT assets, and feel their combined expertise will be directed “to help improve digital services for public sector and enterprise customers through workplace and workforce transformation”.

Morita-San also suggested personalised workstyles are the key to helping Japan thrive even as its population ages, workforce shrinks, and population growth slows due to a low birth rate.

The deal will also see NEC double the number of “digital engineers” it employs with Microsoft skills.

As it happens, NEC made the same promise in November 2020 – but for AWS engineers. That announcement was centred on cloud infrastructure. The new alliance will see Azure become NEC’s “preferred cloud platform to deliver enhanced capabilities to drive sustained digitalization”. NEC and Google also struck a deal in 2018 to “better serve Japanese enterprises”. ®