IPv6 still 5-10 years away from mainstream use, but K8s networking and multi-cloud are now real

IPv6 is still five to ten years away from ascending to analyst firm Gartner’s plateau of productivity, and remains a technology employed by only “early mainstream” users.

So says the firm’s 2021 Hype Cycle for Enterprise Networking, published last week and now grasped in The Register’s claws.

Let’s start with the graphic depicting the Hype Cycle in all its glory. 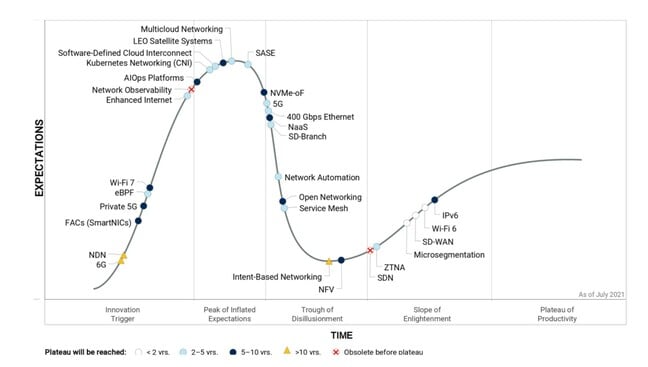 While IPv6 kept its status – thanks to IPv4 remaining adequate and the benefits of migration rated “low” – Gartner added six new items to the cycle, namely:

Other elements of the document The Register found notable include intent-based networking dismissed as something you don’t need to worry about for a decade. Cisco may have gone all-in on the concept, but Gartner rated its efforts and those of other vendors as cursory.

“Nearly all products that are marketed by vendors as ‘intent-based’ fall short of the full capabilities of an intent-based networking system,” the Hype Cycle states.

Software-defined networking was again rated obsolete, because there are no real products in the field. “While technologically obsolete, SDN terminology is widely used by vendor marketing efforts,” the document states. “This remains the top driver behind SDN discussions today.”

Zero-trust network access (ZTNA) is real, the document states, because it “yields immediate benefits by shielding services from attackers”.

“In contrast to basic VPN products, ZTNA removes full network access and improves user experience, flexibility and adaptability,” it adds. Gartner rates the technology as “adolescent” but sees it reaching the plateau of productivity in two to five years.

Another big mover is internet-only WAN access, which Gartner reckons will be used by 30 per cent of you by 2023 – double the rate of 2020.

Networking stacks that span multiple clouds are also a boom market, with the analyst predicting 35 per cent adoption among multi-cloud users by 2025, compared to around three per cent today.

Secure web gateways and cloud access service brokers are also on the march, as are branch office firewall as a service.

400Gbps Ethernet is rated a niche concern, other than for hyperscalers and those who run AI/ML applications in-house. Gartner rates it as the likely successor to 100Gbps Ethernet, despite work having commenced on 800Gbps Ethernet.

Gartner considers Huawei a vendor worth considering for 400Gbps Ethernet, as well as for WiFi 6 and Private 5G networks.

The analyst firm thinks five networking techs have hit the peak of the hype cycle. Software-defined cloud interconnect is one, partly because its main providers are obscure companies. Kubernetes cloud networking is another, because it’s been recognised that Kubernetes’s native networking features aren’t up to the job.

5G is established, and Secure access service edge (SASE) – a term Gartner coined – has been recognised as a quicker and simpler way to secure the enterprise.

Multi-cloud networking is also considered a tech whose time has come. ®