The Document Foundation has released LibreOffice 7.2 RC1, including a large number of fixes intended to improve import and export compatibility with Microsoft Office.

Version 7.2 of LibreOffice, the most popular free and open-source productivity suite, is set for full release in mid-August. New versions appear roughly every six months: 7.0 arrived in August 2020, and 7.1 in February 2021.

The list of what's new is extensive, though most new features are small tweaks or bug fixes. One of the more notable is the ability to have multiple columns in text boxes in LibreOffice documents including Writer, Calc, and Impress – these being word processor, spreadsheet, and presentation graphics.

Writer is already multi-column capable in the main page, but this is for text boxes that you can float anywhere, in the manner of a desktop publishing application. At the moment, this feature is hard to find – you need to select text box, find Text Attributes in the Text box and shape menu – and seems a little buggy (on one text box we could not get it to work), but this is only RC1. 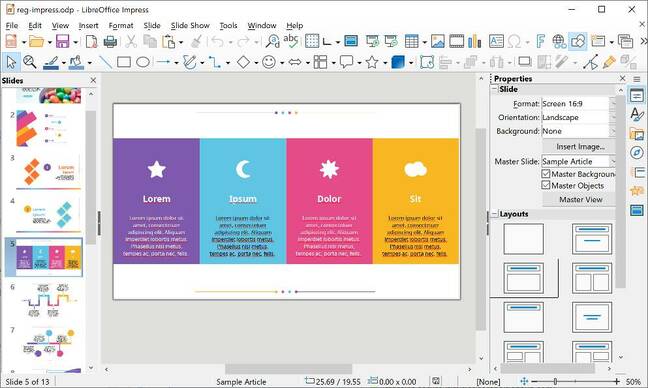 In Writer there were also improved indexing with clickable hyperlinks to index marks in the document, background fills which can cover the page inside or including the margins, gutter margins in page styles, and some more improvements that are quite obscure, such as custom shading for annotated text ranges.

In Calc users now have the option of a "fat-cross" cursor instead of the usual arrow; Autofilter, for excluding rows via a drop-down at the top of a column, can now use colour as a criterion; and some functions have been tweaked. Impress and Draw have refreshed templates. 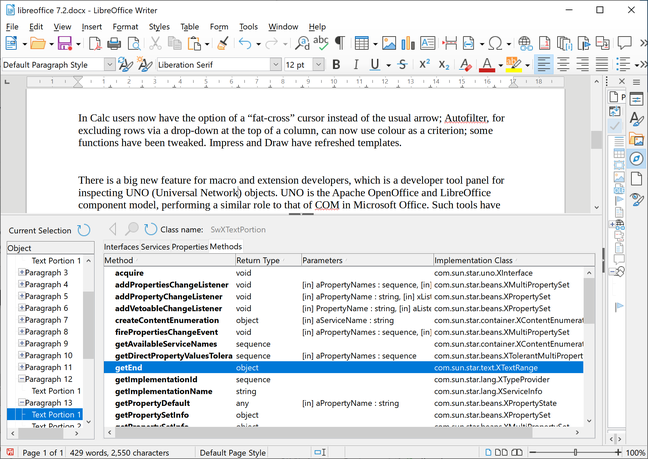 The new UNO inspector now built into the core product

There is a big new feature for macro and extension developers, which is a developer tool panel for inspecting Universal Network Objects (UNO). UNO is the Apache OpenOffice and LibreOffice component model, performing a similar role to that of COM in Microsoft Office. Such tools have previously existed as extensions, but this one is built in and found under the Tools menu in all the main LibreOffice applications.

The tool lets you drill down into a document and see the interface names, services, properties, and methods of every object. It is also a journey into the past: the classes all beginning com.sun.star, referencing both Star Office (the original name of the suite) and Sun (which acquired Star Office). Handy for developers, no use to end users, except as a fascinating glimpse into the internals of the software.

The feature is the outcome of a Document Foundation tender issued last year: "In order to make working with UNO objects easier and to avoid the need to always install extensions before debugging."

That aside, the major change in this release is formed of dozens of fixes and improvements to compatibility with Microsoft Office. LibreOffice is mainly supported by companies which offer commercial support for the product, and one can guess that features like "fix lost tables in footnotes and endnotes by converting them to floating tables during the import, and removing floating at the DOCX export" are a consequence of pain experienced by customers either trying to use LibreOffice with Microsoft's formats (.docx, .xlsx, .pptx) as the defaults, or importing and exporting to these formats to exchange documents with their customers and business partners. 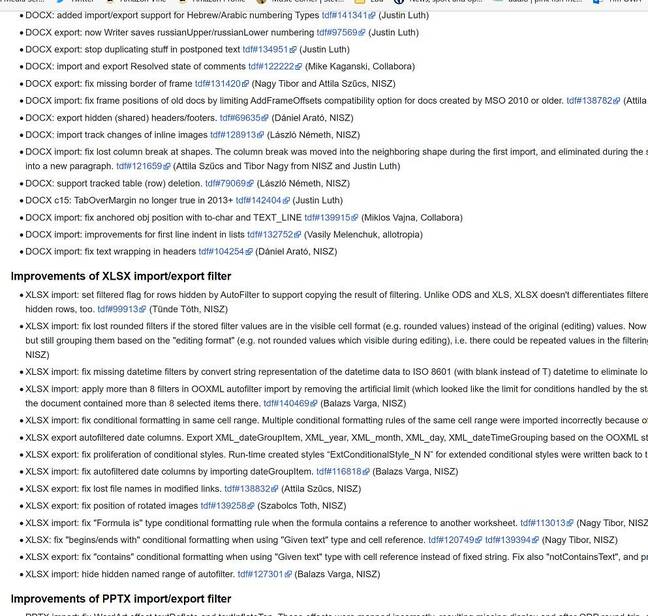 Dozens of fixes to Microsoft Office compatibility, of which this is only a partial list

Microsoft Office also supports the OpenDocument (ODF) formats used by LibreOffice, but although compatibility is good for most general-purpose documents, it can be problematic in cases which depend on precise formatting or advanced features. When Microsoft introduced its rival XML document standard, Office Open XML, the most stinging critique from those who investigated it in depth was that at times the specification essentially said "do it like in Microsoft Office," making it hard to develop alternative conforming applications.

LibreOffice users will therefore be appreciative of the efforts to fix more corner-cases in OOXML import and export, though it is a shame that so much developer time has to be expended on compatibility work rather than core features. ®

Don't mind us, we'll just have a quick look for unsupported installs and then disappear, we pwoooomise
Software3 Feb 2023 | 51