Devs across the world reveal their tools, language choices, and more

A survey of nearly 32,000 developers has confirmed the dominance of JavaScript, showing a remarkable 91 per cent using GitHub, and growth in use of AWS despite the efforts of Microsoft and Google.

JavaScript topped the language popularity charts, with 69 per cent usage, or 39 per cent when developers were asked to specify their "primary programming language."

This is the same as last year, though it should perhaps be combined with TypeScript, which has risen from 12 to 13 per cent. More notable perhaps is that Java has declined from 37 to 32 per cent, while PHP is up from 15 to 22 per cent.

All is not what it seems. The "State of the Developer Ecosystem" survey is annual, but the 2021 effort was the biggest yet, up from just under 20,000 respondents last year.

Why the difference? JetBrains told us that the 2021 survey is global, whereas previously it targeted "18 countries, which contains 70 per cent of developers in the world." JetBrains noted that these additional developers tended to use more PHP and less Java. Still, it means that the company no longer argues that Java is the world's most used primary programming language, and has conceded that title to JavaScript. 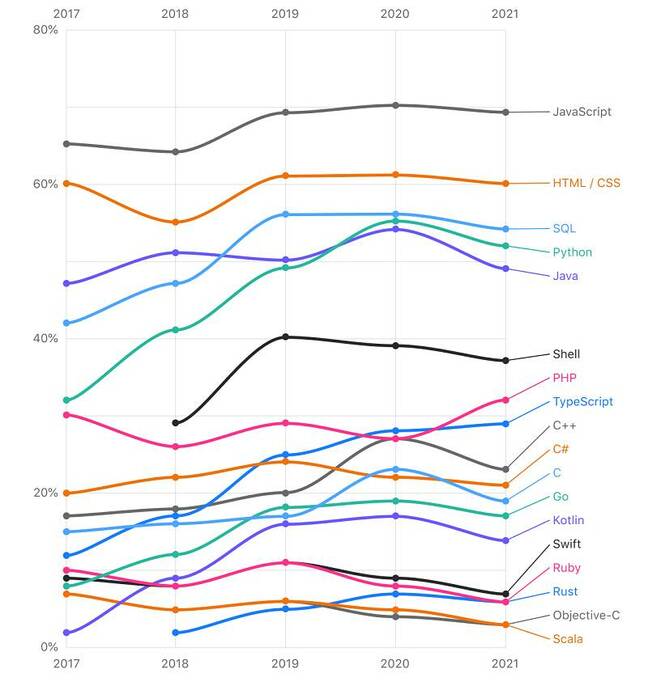 Language trends over 5 years, in answer to the question 'what programming languages have you used in the last 12 months?'

This is a huge survey, and we looked at the points of interest; if you're interested in the detail, the whole results can be found here.

According to the survey, desktop applications are not dead. 71 per cent of respondents said they develop back-end web applications, 58 per cent front-end web, 32 per cent desktop, and 30 per cent mobile. That places desktop development ahead of mobile, perhaps reflective of the grunt work of building custom business software.

Gender distribution was dispiritingly male but the proportion of female developers decreased as experience increased. Developers with 16+ years of experience are 97 per cent male, while those which less than a year are 88 per cent male.

"The diversity in the tech industry is increasing among younger developers," said the report, taking an optimistic view, but it may also be that female developers drop out of the profession earlier.

What do developers earn? More in the USA than anywhere else, by a huge margin, according to this survey, with a median net salary of $102,000 versus $54,000 in Canada and UK (the second-placed countries). 63 per cent of those surveyed were fully employed, with most of the others being students, self-employed or freelance.

The biggest group of developers are 21 to 29-years-old

Another takeaway was that developers are young. According to the survey, 48 per cent said they were between 21 and 29, the largest group. Just 14 per cent were over 40. Again, there are big regional differences, Anastassiya Sichkarenko, the market research analyst who worked on the report, told us. "In the USA there are a lot of developers who are very experienced, but in countries like India, there is a huge amount of young developers." 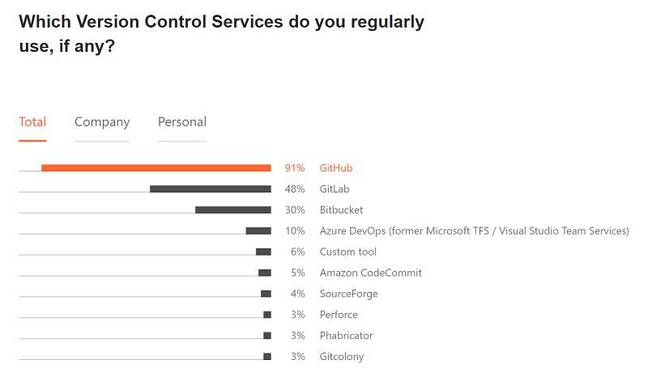 A remarkable 91 per cent use GitHub, though the figures change dramatically when focused on company use

GitHub is dominant, though less in business versus personal projects. 91 per cent of developers said they used GitHub (up from 71 per cent last year), but only 48 per cent used it for business – though it is still ahead of second-placed GitLab at 36 per cent.

The survey also observed a marked growth in use of GitHub Actions, up from 15 per cent last year to 45 per cent today, though Jenkins kept its top spot. Use of GitHub for issue tracking was also up, with no direct comparison with last year because of different breakdown of the data, but this year 38 per cent of businesses and 42 per cent of personal projects used GitHub Issues.

Top for issue tracking in business was Jira at 42 per cent. As for version control technology, Git was up from 90 to 93 per cent, Subversion down from 9 to 7 per cent. Also of note: 67 per cent of developers said they use Git (or SVN etc) from the terminal, though 57 per cent also use it from an IDE.

In the world of containers, 37 per cent of "respondents who are involved in infrastructure development" use Kubernetes, actually a slight decline from 40 per cent last year. "It's about the same, but probably it's stopped its rapid ascent," said Sichkarenko.

64 per cent of those surveyed use Amazon Web Services (AWS), 25 per cent Google Cloud, and 22 per cent Microsoft Azure. That compares to 62, 30, and 25 per cent last year. In other words, AWS has slightly increased its share of DevOps usage among this community.

Alibaba Cloud also made a showing, at 12 per cent, perhaps reflecting the global nature of the new survey. There was also a look at how these figures vary according to company size.

Azure usage was higher in larger companies, whereas Google Cloud was higher among individual and small company users. AWS peaked in the middle, among companies with 51-1,000 employees.

The language-specific sections generated some intriguing statistics too. In the C# world, 66 per cent were doing .NET Core development, versus 62 per cent for .NET Framework. Microsoft's cross-platform .NET has crept ahead. Last year it was 75 per cent .NET Framework, 68 per cent .NET Core.

There is no such thing as an unbiased survey, and this one suffered from being run by a vendor, JetBrains, leading (as the report itself acknowledged) to the problem that "JetBrains users might have been more willing on average to complete the survey."

This bias was most evidenced in the question on IDEs. JetBrains reports that 75 per cent of Java developers use IntelliJ IDEA (a JetBrains product), which is not far removed from Snyk's recent survey of 2,000 Java developers, which showed 72 per cent using IDEA.

That said, Snyk's survey revealed 25 per cent usage for Eclipse and 23 per cent for VS Code, where JetBrains has 11 and 4 per cent (again, specific to Java developers). In both surveys developers could choose more than one. There could of course be bias in the (much smaller) Snyk survey too. However, the JetBrains survey is exceptional for the number of participants and the detail of the questions – though in order to reduce the "response burden," the survey did not show all sections to all participants.

JetBrains did make some effort to obtain good data. The number of respondents before data cleansing was over 47,000; these were reduced by eliminating surveys that were "filled out too fast," responses that came from identical IP addresses, and surveys with "responses that were overwhelmingly similar," among other criteria, removing over 10,000 submissions.

The data was not just collected from JetBrains users; there were ads in "social media, Facebook, Instagram, third-party bloggers, online communities," the company told us. The survey was translated into nine different languages, addressing what JetBrains said it sees as a weakness in other surveys such as the one conducted by StackOverflow, which it believes is not representative of non-English and Asian programming communities. 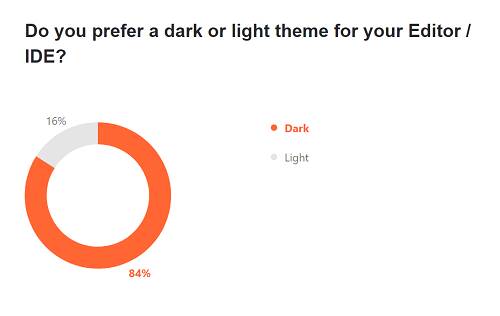 Dark all the way: 84 per cent prefer a dark theme for their IDE

Despite the JetBrains leaning, Microsoft's open-source Visual Studio Code made a big impression in this survey. It was the most popular IDE for C, C++, JavaScript and Rust. C# developers used Visual Studio most. Kotlin developers, Android Studio. Swift developers, Xcode. JetBrains IDEs won for Go, Java, PHP, Python, and Ruby. 84 per cent overall preferred a dark theme for their editor. ®