Because in Miri District, that's how they roll

Police in the Malaysian district of Miri have used a steamroller to crush 1069 computers allegedly used to mine Bitcoin.

The accused in this case, according to Miri Police's Facebook page, were stealing electricity to power their mining operations.

Local outlets report that the electricity theft was so substantial it caused blackouts.

Raids on half a dozen locations around Miri yielded six arrests, with all jailed for up to eight months and fined 8000 Malaysian Ringgit apiece (US$1900). Police also destroyed three houses that were used by the miners.

Police staged a crypto-crushing event for local media, which obliged with the (unpleasant-sounding) video below.

Here's the result of this crushing blow against electricity thieves. 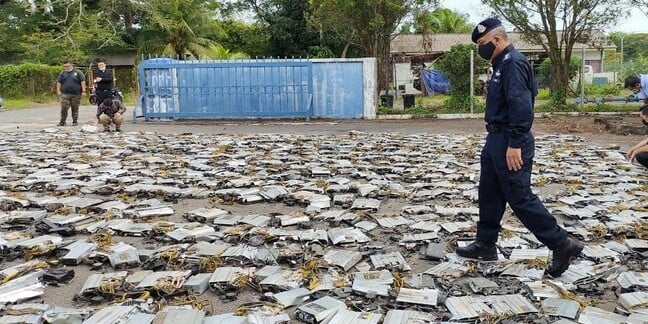 Cryptocurrencies and digital tokens are legal in Malaysia, but issuers and exchanges are heavily regulated. ®

Despite ban, China surges back to second place on bitcoin mining charts

Miners behind the Great Firewall may never have downed tools, say Cambridge crypto-boffins
Software19 May 2022 | 5