Updated IBM has been demoted from Leader to Challenger in Gartner's 2021 Enterprise Backup and Recovery Magic Quadrant – the only leading 2020 supplier to be so treated.

The MQ positions suppliers in a four-box 2D space, defined by an ability to execute on the vertical axis and completeness of vision on the horizontal axis. The four boxes are Leaders, Challengers, Niche Players, and Visionaries, with the bottom left to top right diagonal representing a balance between the two axis qualities. Here's the latest MQ: 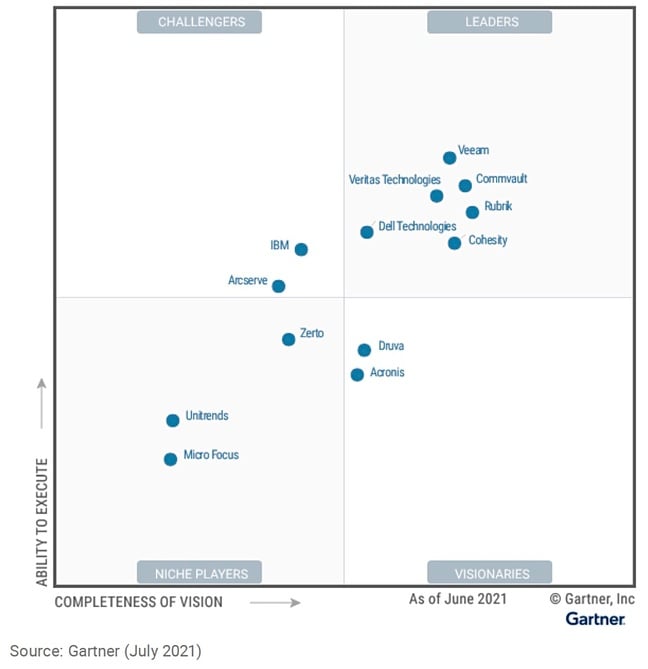 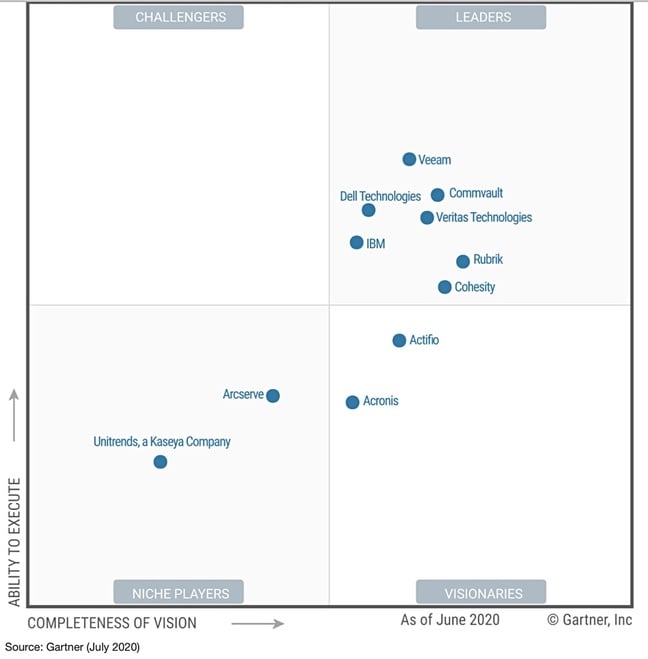 Last year's edition of the MQ shows seven leaders: Veeam, Commvault, Veritas, Dell, IBM, Rubrik and Cohesity. Only IBM has been demoted from the Leaders box this year, while both Rubrik and Cohesity move up in the box. Gartner's MQ report points out that IBM's Spectrum Protect suite does not integrate with Azure native snapshot APIs. Further, backup of Google Cloud Platform environments, AWS RDS, Azure Managed SQL, and others is not supported.

IBM depends on third-party vendors to backup Microsoft SharePoint, 365 Exchange Online, some NoSQL databases, Nutanix AHV VMs, and others. The Spectrum Protect suite also trails other leaders in its ability to provide proactive issue discovery through AI and automated incident management and response. 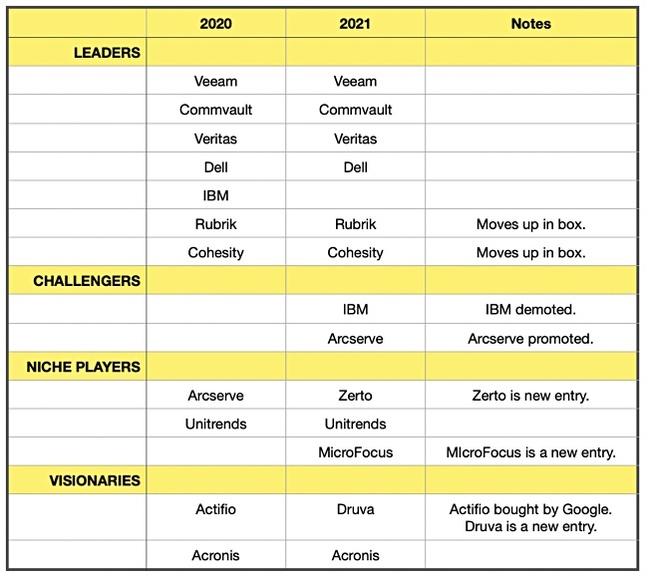 The other Challenger supplier, Arcserve, has been promoted from last year's Niche Players box. This is despite Arcserve not responding to Gartner's requests for supplemental information. The Gartner analysts based their ranking on publicly available Arcserve literature.

Cohesity was quick off the blocks with a statement about this MQ. Since last year it has introduced backup as a service, recovery and protection from ransomware, and automated disaster recovery.

CMO Lynn Lucas said: "We believe being named a Leader in this report speaks to Cohesity's success in delivering next-gen data management, which starts with helping organisations protect their data and rapidly recover from ransomware attacks – critically important in today's world. Couple that with the ability to easily backup, recover, and manage data across a host of use cases – in the data centre, edge, cloud, or through as a service – all on one platform. That is radical simplicity at its best."

Poor IBM. It hasn't invested enough in adding new capabilities to the Spectrum Protect suite and has fallen behind the competition in the Leaders Box. ®

A spokesperson at IBM has sent us a statement:

"For years, IBM has been ranked a leader in Gartner’s Magic Quadrant (MQ) for Enterprise Backup and Recovery Software. It’s an achievement that reflects our commitment to provide a comprehensive and thoughtful vision for backup and recovery to the market. Although Gartner gave us high marks for Container backup, Backup immutability and Simplified deployment in this year’s MQ, they marked us lower than others in several areas."