After hundreds of hours of work, engineers called out of retirement for help

Pics The Hubble Space Telescope is back in action doing what it does best – capturing stunning images of the universe – after more than 50 NASA engineers worked hundreds of hours to get the instrument working again.

After activating redundant components within the orbiting observatory on Friday to clear a hardware glitch, the telescope has been able to use its sensors again. NASA released two photos of oddball galaxies Hubble snapped over the weekend: one depicting two galaxies intersecting each other, and the other showing a large spiral galaxy with three arms. 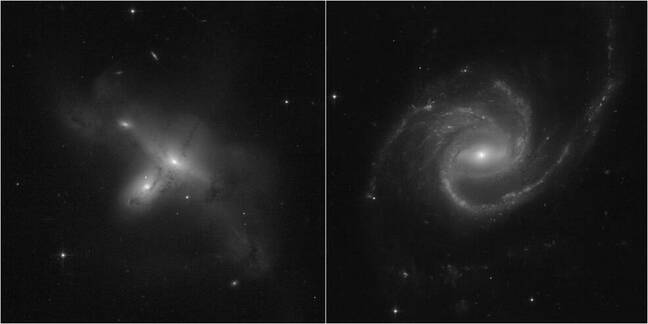 About a month ago, Hubble's onboard payload computer, which controls its instruments, mysteriously froze, forcing the main computer to put the observatory's sensors into an inactive safe mode. It was feared by some that ol’ Hubble was a goner after attempts to revive the machine failed.

NASA had to dig up 30 to 40-year-old documents to investigate the hardware lock-up, and engineers were even called out of retirement for advice. By switching to backup power supply electronics as well as a backup payload computer, the US space agency was finally able to bring Hubble back online.

Now it's all systems go and now hopefully the Hubble controller's biggest headache will be dealing with the backlog of requested observations.

“I’m thrilled to see that Hubble has its eye back on the universe, once again capturing the kind of images that have intrigued and inspired us for decades,” NASA Administrator Bill Nelson said in a statement.

“This is a moment to celebrate the success of a team truly dedicated to the mission. Through their efforts, Hubble will continue its 32nd year of discovery, and we will continue to learn from the observatory’s transformational vision.”

At first, NASA thought the problem was down to a faulty memory module that had degraded over time from absorbing too much cosmic radiation. But utilizing an alternative onboard module didn’t fix the issue. Further analysis suggested the glitch had something to do with an iffy power control unit. When the team switched to a backup unit to power the backup payload computer, Hubble came roaring back to life.

“The main computer had to be turned off, and a backup safe mode computer temporarily took over the spacecraft. Several boxes also had to be powered on that were never turned on before in space, and other hardware needed their interfaces switched.

This isn't Hubble's first outage. In 2008, its Science Instrument and Command & Data Handling unit failed and a four-person crew of astronauts repaired the machine in orbit in 2009. Backup components in that replacement hardware was booted up 12 years later to deal with this crisis.

The telescope was launched in 1990, and was designed to last 15 years. Over 30 years later, however, it’s still toiling away and observing the heavens.

“Hubble is in good hands,” said Kenneth Sembach, director of the Space Telescope Science Institute, which helps conduct Hubble science operations. “The Hubble team has once again shown its resiliency and prowess in addressing the inevitable anomalies that arise from operating the world’s most famous telescope in the harshness of space.

“I am impressed by the team’s dedication and common purpose over the past month to return Hubble to service. Now that Hubble is once again providing unprecedented views of the universe, I fully expect it will continue to astound us with many more scientific discoveries ahead.” ®