Our Friends Electric: A pair of alternative options for getting around town

The Register rakes a talon over next year's battery-powered jalopies

As traditional car makers seek to make electric vehicles that won't scare off the buyers, others are taking a slightly different path. Enter Triggo and Microlino.

Both manufacturers are nearing full-scale production, but each has chosen alternative routes in terms of design and how their vehicles will be used. 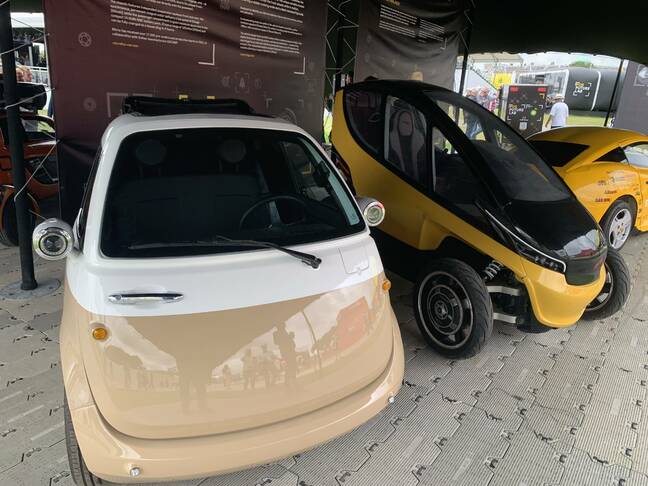 The four-wheeled Triggo has been doing the rounds for just over a year, and the in-line two seater is targetting the car-sharing market. The Register took a look at one at the Goodwood Festival of Speed Future Lab and we were delighted to note that it looked very close to being production-ready (unlike certain other PowerPoint vehicles).

It's a neat little thing – its axle narrows, making the width a mere 86cm and allowing it to squeeze into places where only motorcycles might otherwise go, albeit with a maximum speed of just 35kph. The axle will expand to 148cm when there is more space, increasing that speed to 90kph. A fun party trick no doubt.

However the arguably more interesting thing is how they are to be paid for and used. "The idea," a spokesperson told us, "is you basically pay for them by the kilometre."

The theory goes that one uses an app to call a Triggo, the cars turns up, and then you set off. Much like if one was using a popular ride-sharing system, except in this case the driver is not in the car.

Instead, the driver bringing the car to you can be located in an entirely different geographic region. "We had one driven around Warsaw by an operator in southern Berlin," said the spokesperson.

Pilot testing is under way, and expected to be completed in March 2022. One of the pilots, the spokesperson told us, is in the UK's Milton Keynes. The roundabouts for which the city is famed will be a test of the Triggo's ability to lean as it potters around corners.

The challenge is, as ever, acceptance. For a city of two million people, Triggo told us 700 cars would be needed (based on its Warsaw benchmark). The cars take up a lot less space on the road and dispense with drivers being physically present, but existing schemes such as Uber and Lyft have the benefit of both familiarity and being already in place.

That said, the Triggo concept represents an intriguing alternative to the expensively fully autonomous options being promoted, and the often alarming purchase price of an electric vehicle.

However, if the thought of hopping into a vehicle that might have been recently been occupied by another does not appeal, then may we present the delightfully retro Microlino.

Also featuring space for two passengers (and three beer crates, according to the marketing materials), the front-opening door of the vehicle may trigger a shiver of recognition. A spokesperson told us the little thing was good for up to 50 miles an hour (although he told us the reality was more likely to be around the 20 to 30mph mark in urban areas) with a 120-mile range (the company's literature has two battery options – one for 125km and another for 200km). Charging would take around four hours.

"They're looking to start rolling out cars as of next year," the spokesperson told us, hopeful that UK availability would happen at the same time. With an anticipated price of around €12,000, the vehicle is an option for those seeking battery-powered transport around town without having to stump up an even more eye-watering sum for the privilege. Or they could just get a bike.

As for the Microlino itself, it put us very much in mind of a four-wheeled BMW Isetta 300 from the mid-20th century. Parking is supposedly simple (the idea one can cross-park and disembark through the front door directly onto the pavement) although, as with its ancestor, we can imagine a bit of thought will be needed to ensure the door remains openable.

Both the Triggo and Microlino represent interesting ideas aimed at urban transportation and, unlike all too many concepts, are tantalising close to reality. If we were to choose between the two (and we wouldn't, because this hack drives around in a 30-year-old Golf), the Microlino just pips the Triggo to the post with its delightfully retro looks and more traditional ownership model.

We look forward to seeing either on the roads in the coming years. ®

Updated A day in the G is like a day on the farm. Every meal a banquet. Every code checkout a parade. I love the G
Bootnotes23 Sep 2022 | 28