Lithography specialist ASML, one of the companies that sells chipmakers the things they need to actually make chips, has announced a barnstorming Q2 with its highest order intake ever - as customers scramble to fill a depleted supply chain eager for parts.

"Our Q2 results were very good," ASML chief executive Peter Wennink claimed in a pre-recorded interview provided to press and investors on the day of its earnings call. "As we indicated last quarter, we ended the second quarter with a sales number of €4bn (£3.45bn/ $4.7bn)." This equates to year-on-year growth of almost 21 per cent. 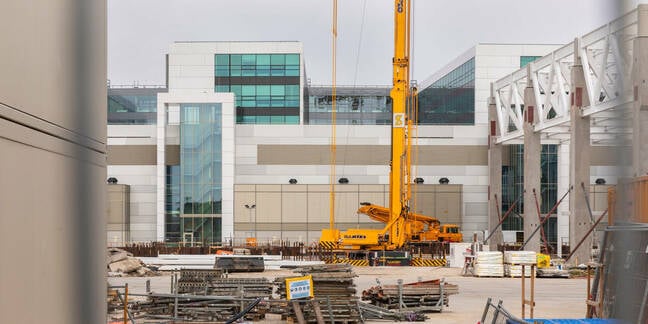 ASML building on a site near its HQ in Veldhoven, the Netherlands, last year

While that was a little below its previous quarter, as well as its guidance for the coming quarter, Wennink blamed some creative accounting which saw €300m in revenue delayed: "In the second quarter [ended 4 July] we shipped a number of machines without what we call a Factory Acceptance Test," he explained. "So, basically, the revenue falls in the next quarter for revenue recognition purposes."

ASML's big prediction for the year: growth in extreme ultraviolet (EUV) lithography - one of the key ways manufacturers are looking to shore up Moore's Law, the observation turned cast-iron target from Intel co-founder Gordon Moore that the number of transistors on a leading-edge part trends towards a doubling roughly every two years.

"Our EUV capacity next year we think will be around 55 units," Wennink explained. "When you look at the order book around 80 per cent is already booked at the end of Q2 2021. But for 2023, we are now looking to bring that capacity over 60 units.

"Longer-term demand will be over 60 units. You have to also realise, when you think about EUV, that customers buy machines - but in fact they buy wafer capacity. So new machines like the NXE:3600D has a 15 to 20 per cent higher productivity. Also the newer generations add more capacity in terms of wafers out, because the machines are so much more productive."

Wennink's projections follow an announcement earlier this year that Micron was to invest in EUV with a roadmap to deploy EUV production "in limited layer count" by 2024. If successful, it would join Samsung and Taiwan Semiconductor (TSMC) as the only high-output fabs to have started EUV production.

"It's going to be a very strong year," Wennink predicted of the remainder of 2021 for ASML, with 35 per cent growth projected. "We have seen in 2021 also the reaction of the electronic industry at large to the COVID year," he added. "So you saw a catch-up effect, and I think that will stretch into 2022. Some of the supply chains have been disrupted and it takes a bit longer."

As to where growth will be found once the chipmakers have caught up to demand, Wennink pointed to "advanced semiconductors" for markets including artificial intelligence, high-performance compute, and "the intelligent edge" - but also pointed to a something else pushing its expectations higher.

"There is a third trend," Wennink claimed, "which is more, you could say, the trend for technological sovereignty. The big geographical areas in the world like the United States and Europe feel that part of that big growth that's coming should also be local."

And the only way to bring chip production local: to buy chip-producing machines.

It's hard to argue with that particular prediction: Russia is increasingly interested in home-grown processors, tapping local firm Yadro and its RISC-V chips to join its existing Elbrus parts; academic projects in China are targeting the creation of 2,000 RISC-V laptops by the end of 2022, plus high-performance processors designed to go toe-to-toe with Arm; while India is hard at work on a range of RISC-V parts - including some aimed at native supercomputers.

"The semiconductor industry, the semiconductor makers, currently have a combined sales number of about $500bn," said Wennink. "That could be a trillion dollars by the end of this decade. So we talk about doubling the sales, which actually means that we need to add that capacity. We need to help our customers in their expansion plans. When they build fabs, we will ship the equipment."

The company's gross margin rose to 50.9 per cent, above its previous guidance, primarily driven by software upgrades for existing customers looking to increase their output. ASML's most impressive figure, though: an order intake of €8.3bn, €4.9bn of which was for EUV products, which Wennink described as "the highest quarterly order intake we've ever seen."

Yeah, and make it something better than just asking Arm to dual-list in London...
Government Tech Week26 Jan 2023 | 93

Yes, the Chinese will never think of doing something like this, muhaha
Systems27 Jan 2023 | 16