Pipe down, Jeff. You've only gone where Gus Grissom went before, 60 years ago today

Remembering the second American in space

Somewhat lost in the hubbub over Jeff Bezos' jaunt into space is the 60th anniversary of Virgil "Gus" Grissom's suborbital flight aboard Liberty Bell 7.

The mission was the second Mercury capsule crewed by a human and followed Alan Shepard's flight on 5 May 1961. Both missions were suborbital vertical launches atop a Mercury-Redstone booster (derived from the Redstone ballistic missile).

Grissom's compact Mercury capsule, Spacecraft Number 11, had a few updates over that of Shepard's. Instead of the 10-inch side ports Shepard peered through, Grissom's capsule had a large window affording a 30° horizontal and a 33° vertical field of view. There were better controls and, infamously, a redesigned hatch.

Shepard's flight had employed a mechanically operated hatch which was deemed too heavy for the planned orbital flights. Grissom's explosive hatch was considerably lighter.

Ray E Boomhower's book, The Lost Astronaut, also noted an improved life raft, new Earth-path indicator, and tweaks to Grissom's spacesuit. Better wrist fittings made for improved movement and a "hero's medal" in the form of a convex mirror worn on the chest permitted an onboard camera to record both astronaut and instruments.

Grissom paid close attention to his spacecraft. He attended production meetings at the McDonnell plant in St Louis, Missouri, to keep an eye on progress and gave the teams feedback. He reckoned that if the engineers saw how much he cared, they might work "a little more carefully than they already were." 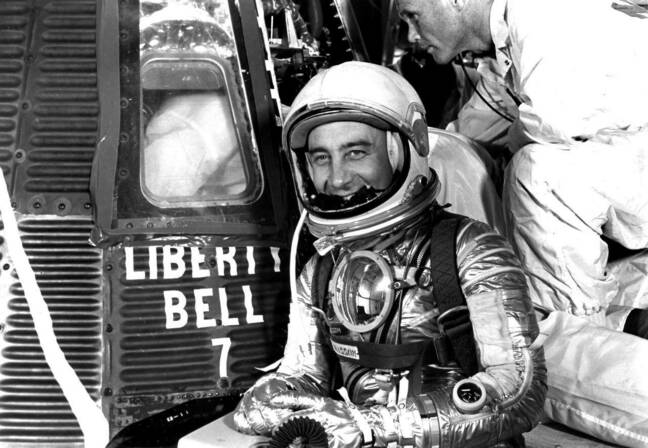 Grissom's flight plan was also lighter than Shepard's, as NASA bosses realised the first American in space had been overloaded during his brief minutes of weightlessness. Some communications checks were stripped out, but rather than control only one axis at a time, Grissom would attempt to take over all three at once.

After repeated delays, the rocket left the pad at 12:20 UTC 21 July 1961. Grissom did not experience the same vibrations as Shepard during the powered flight thanks to improved fairings between capsule and rocket, and some extra padding around his head. The mission itself went relatively smoothly, although Grissom complained that his controls felt "sticky and sluggish." The spectacular view from the window didn't help with keeping to timelines either.

At 190km up (quite a bit higher than what Bezos would achieve more than half a century later) Grissom manually fired the Mercury's retro rockets for re-entry. Nine minutes and 41 seconds later, as the capsule descended, the drogue parachute deployed, followed by the main chute. The capsule splashed down into the Atlantic at 12:36 UTC, which is when things began to go awry.

Grissom prepared to exit the capsule. He removed his helmet and released his straps. He pondered not bothering with the chore of securing the rubber neck dam on his suit to keep water out and air in. "Fortunately, I reconsidered," he observed later. He then prepared the hatch and removed the cover and safety pin from the detonator.

Grissom would later insist he had not touched the detonator (other than removing the cover and pin) and that the hatch cover abruptly blew away, without warning, letting in the sea air and sea water. The astronaut clambered out of the sinking capsule, his own suit leaking due to an open inlet valve and was rescued.

The capsule, however, was lost.

The suspicion in some quarters that Grissom had deliberately blown the hatch, perhaps in panic, continued to dog the astronaut. His Mercury colleagues – John Glenn, Gordo Cooper, and Wally Schirra – reported cuts and bruises to their hands from the recoil of the detonator, but Grissom had no such injuries.

In his book The Unbroken Chain, pad leader Guenter Wendt speculated that the second method for blowing the hatch, an external lanyard, might have come free from its compartment on splashdown, become tangled in the fabric landing bag, and been pulled. "We will never know for sure," he said.

Grissom's capsule was raised from the ocean floor in 1999. Grissom himself would go on to fly the first crewed Gemini mission in 1965 (with the amusing call sign Molly Brown before perishing in the Apollo 1 fire of 1967.

Fellow Mercury astronaut and, following his grounding for medical reasons, Chief of the Astronaut Office Deke Slayton wrote that "if possible, one of the Mercury astronauts would have [had] the first chance at being first on the Moon."

"Gus," he said in the book Deke!, "was the one guy from the original seven who had the experience to press on through to the landing."

As the flight of Jeff Bezos and his companions is celebrated - particularly Wally Funk's trip to the edge of space - it is worth taking a moment to remember the achievements of Gus Grissom and the NASA team decades previously.

Ray E Boomhower's book The Lost Astronaut provides an insight into the life Virgil "Gus" Grissom from his early days to his later career. It ends with the recovery of the Liberty Bell 7 capsule at the end of the last century.

On that recovery mission was Guenter Wendt, and his book (authored with Russell Still) The Unbroken Chain is an interesting read. Finally, for a take on the machinations of NASA and the programmes of the era, we'd also recommend a look at Donald K Slayton and Michael Cassutt's Deke! ®