'Maybe that's what you do, but that's not what everybody does'

Microsoft veteran Raymond Chen has addressed a question that has occurred to most Windows users one time or another: why does Windows have a "New" menu?

Right-clicking in an empty space on the desktop or file explorer fires up a context menu in Windows. The menu has a number of actions including a 'New' menu item (or 'New item' in current Windows 11 Preview builds) that pops an empty file with the necessary extension in the desired location. 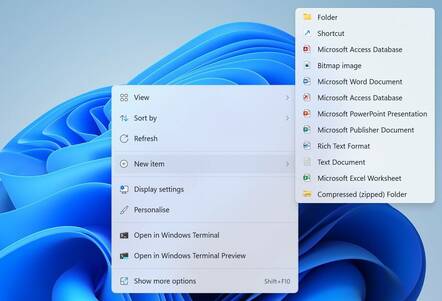 For many, the method to create new documents is to open the application concerned (such as Word) and then save the file where it needs to be. Or take an existing file and then copy and open it.

"Sure," said Chen, senior program manager at Microsoft, "maybe that's what you do, but that's not what everybody does."

"Not everybody knows that the way to create a new BMP file is to open this program called Paint that is hidden in the Accessories folder of your Start menu," he added.

He may be right but if Microsoft gets its way, that program called Paint could well end up consigned to the moribund Microsoft store, and then where will we be?

As such, the New menu is a convenience for users, permitting the file to be created where wanted without recourse to a pesky Save As option.

Chen's comments came as Microsoft readies an overhaul of the right-click context menu in Windows 11 which it said "has grown in an unregulated environment for 20 years, since Windows XP, when IContextMenu was introduced."

The plan is to group common commands, and give the poor thing a general tidy-up in keeping with the new shiny of Windows 11.

Right-click in empty space, however, and the "New" menu item lives on as "New Item."

"For people with a document-centric view of the world," explained Chen, "programs aren't really things that you think about. What you really work on are documents."

Hence the item endures while the rest of Windows gets a visual overhaul.

Chen mused: "Who among us can say they never created a new class or project by copying an existing one, and then deleting everything inside?"