The three horsemen of the borkpocalypse: CMOS error, XP and... death

BORK!BORK!BORK! Windows XP is coming up to a 20th birthday yet it is heartening to see that the OS can still be guaranteed to take its place as one of the three horsemen of the borkpocalypse.

While not actually on a screen of blue, the ugly face of Windows XP has shown itself nestled between a CMOS error and another screen that has simply decided to end it all. 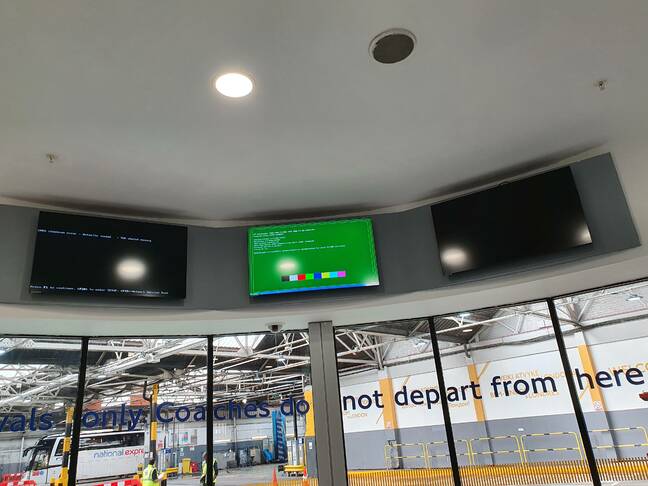 For the uninitiated, Victoria Coach Station can be found in the City of Westminster and serves as a terminus for all manner of coach journeys around the UK. The company behind it was incorporated almost a century ago.

Things weren't so good in 2020, as the coach operator visible through the windows reported an 80 per cent drop in passengers numbers.

As for the trio of bork, it's not clear what has caused the CMOS checksum error on the left – possibly a battery breathing its last? The 32M of shared memory suggests to us that the hardware is both relatively elderly and unlikely to be a ball of fire. Even if it could boot.

However, taking centre stage is Windows XP. It looks like whatever app this installation is running has not seen its database for the best part of a month or more. It is also running atop the similarly obsolete .NET Framework 2.0 as, we suspect, is more legacy code than admins would like to think about.

In this case, things have gone a bit wrong and left onlookers none the wiser with regard to which coach has arrived from where. The only thing they know for sure is that Windows XP is surely the cockroach of operating systems, and simply refuses to die.

Even if the database lurking behind the scenes has taken its own bus to nowhere. ®