The silicon is weak, but the iron is strong

Bork!Bork!Bork! "Steam powered" is occasionally used in an unkind fashion to describe computer hardware past its best. Today's entry in the bork archives takes the phrase to a whole other place.

Lurking in the town of Swindon is a museum dedicated to the UK's Great Western Railway (GWR), on the site of an old railway works. It's an excellent place, and well worth a visit – indeed, there is an authentic GWR Signal box in which enthusiasts can yank signal levers, replete with helpful information on the... oh dear. 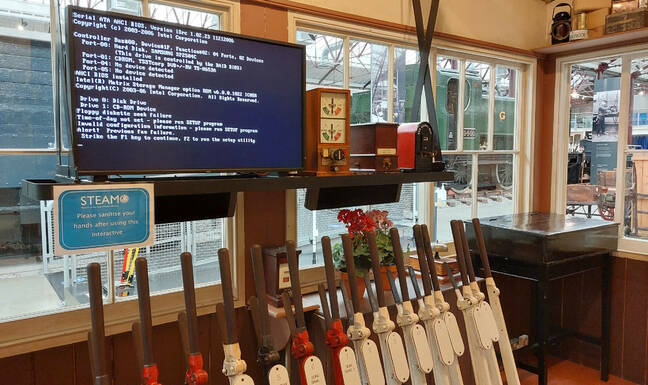 Despite the exhibit taking pride of place on the museum's web page, when our eagle eyed reader, Alastair Stevens, took a trip there, he found that all was not well in the digital world, even if the decidedly analogue controls of yesteryear remained available.

At first glance, we'd suspect this is another case of a dying CMOS battery. We're not sure of the age of the kit in question, but that Samsung drive is hardly a spring chicken and exactly why a rig used to educate and inform a viewer on the finer points of signal operation needs a DVD writer is anyone's guess.

Sadly, there is no keyboard present upon which to strike the F1 or F2 keys, unless some wag has helpfully rigged up the levers to function as an impromptu input device. Perhaps a bit of Arduino action and a USB connector would do the trick (certainly, that's how we persuaded a Raspberry Pi to recognise a 40 year-old TI99/4a keyboard.)

A keyboard operated by elderly signal lever would also most likely be a good deal more reliable than some of Apple's efforts in recent years.

As for the museum itself, we are delighted to report that it reopened in May. It's a splendid place for likers of steam-powered big iron (no, not the IBM mainframes of old) and industrial history fans alike and has some really rather excellent locomotives on show, as well as rolling stock. A recreation of the Swindon Works is also on offer and, frankly, who wouldn't enjoy a go on a steam train simulator?

Sadly, the age of steam seems to have passed for the stricken screen. If only the CMOS had been coal-fired, the computer might still be running. ®