Intel announces AWS has become a client, Qualcomm likes its future tech, advances that as proof it's back in business

Reveals tech roadmap that contains some real change, some renaming

Intel has announced that Amazon Web Services has become the first customer for its foundry services packaging solutions, and that Qualcomm has become a partner of sorts in a silicon manufacturing process said to represent a step change beyond current Intel tech.

Chipzilla revealed the new relationships at a Monday event titled "Intel Accelerated" that laid out the roadmap CEO Pat Gelsinger believes will "continue our unquestioned packaging leadership" and explains "how we will get to process performance parity, and then leadership, sooner than you think".

Some of the roadmap was about expectation-setting. Gelsinger argued that current names for processor tech such as "ten-nanometer process" aren’t helpful because there's little actual relationship between the size of stuff on a chip and the names used to describe it.

You therefore won't hear Chipzilla talk about a seven-nanometer process. Instead we get an Intel 7 moniker, which will be followed by Intel 4 and Intel 3. Just as Intel finished confusing the heck out of everyone by going from Pentiums to Cores, the successor to Intel 3 is Intel 20A. The A stands for Angstrom and reflects a shift to a new – near-atomic – scale of semiconductor manufacturing.

Until the Periodic table is exhausted, Moore’s Law is alive

Our sibling site The Next Platform has dissected the details of those new technologies and future Intel plans here.

Suffice to say: Intel knows the knows the technical bottlenecks that make its products and processes inferior to rivals and, as is proper for a chipmaker, is working furiously to commercialise technology that will catapult it back to a leadership position.

"Until the Periodic table is exhausted, Moore's Law is alive," Gelsinger enthused. 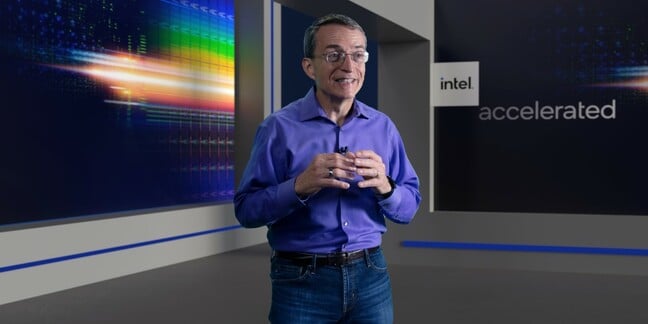 Intel's intent was clearly to show the world its woes are behind it. Unfortunately, the event contained almost nothing to suggest that the manufacturer has changed in ways that will avoid past problems like messing up its 10nm process.

The roadmap, for example, revealed that Intel 7 is the previously-discussed tech for Alder Lake and Sapphire Rapids – and readers may remember that we got a preview of Alder Lake just three months ago at Taiwan's Computex virtual gabfest. Intel 4 is for Meteor Lake and Granite Rapids, previously slated as Intel's first 7nm silicon. While the event mentioned that Meteor Lake's manufacturing problems are behind it, delivery dates floated in March 2021 remain fixed for early 2023.

Left unsaid was that Meteor Lake/Intel 4 is already rather behind schedule. The event also omitted discussion about what Intel has done to avoid similar product development SNAFUs in future. Intel emits revised roadmaps every so often as its products slip behind deadlines, and this is another example of that.

Gelsinger did mention Intel's plans for increased manufacturing capacity and praised policy-makers in the USA and Europe for understanding the urgency of augmenting Intel's own investments to create what he called "balanced, sustainable and secure" supply chains. But hardly a word was spoken about Intel's past missteps.

Instead, we got the very brief mention of AWS's interest in Chipzilla's packaging tech, and an even-less-substantial mention of Qualcomm's enthusiasm for using 20A in some way.

Also absent was detail on how the roadmap impacts Intel's lagging GPU business and largely non-existent mobile business, or what it all means for new products like the recently announced integrated processing unit.

Gelsinger wrapped up by saying Intel is back. And it is – at least in its ability to make grand announcements.

Let the chips fall where they may. ®