Microsoft will not support a semi-annual release channel in the forthcoming Windows Server 2022, and users requiring frequent updates will be directed towards Azure Stack HCI (Hyperconverged Infrastructure).

In the old Windows Server world, users could choose between the Long Term Servicing Channel (LTSC) and Semi-Annual Channel (SAC) for installations, with LTSC being essentially the traditional model of a big release every two or three years, and SAC being more the "as-a-service" model with frequent feature updates to get the latest technology.

Businesses installing Windows Server for general-purpose use would normally use LTSC, which has five years of mainstream support and five years of extended support. The purpose of SAC is for container workloads (host or container image) or scenarios where a VM is short-lived and easily replaced. Limitations of SAC include only 18 months of support per release, a requirement for Software Assurance (a more expensive subscription license), and no desktop experience option.

However, earlier this week Microsoft updated its release information to state: "Starting with Windows Server 2022 there is one primary release channel available, the Long-Term Servicing Channel... the Semi-Annual Channel in previous versions of Windows Server focused on containers and microservices, and that innovation will continue with Azure Stack HCI." 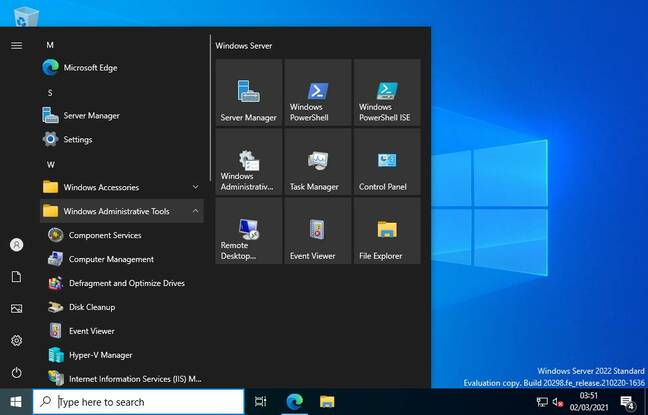 Windows Server 2022 looks much like Windows 10; all the interesting changes are in core plumbing features

Azure Stack HCI is a hybrid virtualization platform where the customer buys validated hardware (though there is an option for installing on any compatible hardware) from an approved supplier, connects it to Azure, and pays $10 per physical core per month for running it. That does not include any licensing costs for guest operating systems or other applications. Azure Stack HCI is a cluster that requires a minimum of two servers.

Despite the name, Azure Stack HCI is not all that similar to Azure Stack Hub, where users purchase Azure services to run on pre-approved hardware in their own data centre. Azure Stack HCI is more like a special configuration of Windows Server and Hyper-V, where the host operating system is purchased on subscription and kept up to date by Microsoft. Azure Stack HCI has no desktop experience and is managed via the browser-based Windows Admin Center or via the Azure Portal – though this integrated management is for the host operating system and not the guests or whatever is running on them, which might include Exchange, SharePoint, SQL Server, Linux guests, and so on.

There is a special case for Azure Stack HCI when AKS (Azure Kubernetes Service) is installed. In this case, users pay $1.33 per virtual CPU of running worker nodes per day. In preview is the ability to run Azure services such as App Service, Azure Functions, and Azure Logic Apps on AKS, which in the context of Azure Stack HCI makes this even more deeply wedded to Azure.

What will the impact be of removing the SAC option for Windows Server? General-purpose users will not be affected since they were unlikely to use it. But there is some confusion about what is happening with Windows Server container images, which typically do use SAC.

"We realised with growing concern that there doesn't seem to be hide-nor-hair of either a Windows Server SAC 21H1 release, and neither 21H1 nor 10.0.19043.985 are listed in the tags on [Docker Hub]," said a user on the Windows Containers GitHub repository. Microsoft's program manager for Windows Server Containers, Weijuan Shi Davis, confirmed a few days ago that "the next Windows Server release is Windows Server 2022, an LTSC. There is no Windows Server version 21H1 or any container image of that version planned."

At a high level, it seems that Microsoft is investing in Azure and AKS, and that on-premises Windows Server users are in some respects being left behind. It is notable, for example, that Active Directory's functional level has not changed since Windows Server 2016, and this remains the case in Server 2022.

In a recent online presentation on Windows Server 2022, Microsoft said: "Azure Stack HCI is our strategic direction for all virtualization host innovation."

Patch without rebooting: Only on Azure or Azure Stack HCI 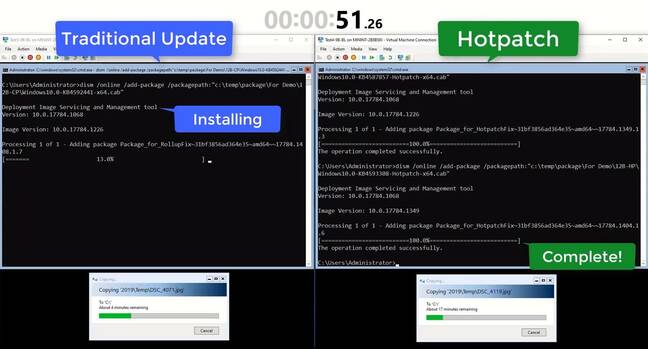 Another facet of this trend is the existence of Azure Editions of Windows Server 2019 and now Windows Server 2022, which have exclusive features. One of those is huge – Hotpatch, or the ability to apply security patches without rebooting. This works by patching running processes in-memory, and persisting the change after the next reboot.

At the above presentation, Microsoft program manager Nick Washburn showed how security updates could be applied without reboot and without interrupting a running process, in this case a file copy operation. Hotpatch was many times faster than the traditional approach, almost approaching Linux-style patching in this respect.

"Hotpatch is one of many new features that are coming out on Automanage for Windows Server... it's important to note that this edition is available exclusively on Azure. We'll first make Windows Server Azure Edition available on the Azure public cloud, then on HCI 21H2 in coming months," said Washburn. Hotpatch does still require a reboot every quarter. Automanage is a new Azure service, in preview, for maintaining the operating system of virtual machines.

SMB over QUIC, which promises secure access to Windows file shares from anywhere, is another key feature which will be available only in Windows Server Azure Edition. 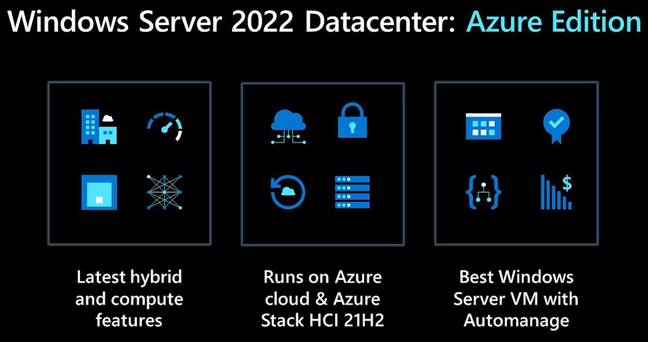 How long do we have to wait for Windows Server 2022? Not long at all. The code has been released to manufacturing, Microsoft said at the above-mentioned presentation, and general availability will follow soon. ®

If you've got no OS of your own, you've got little chance to compete, Firefox maker sighs
Applications23 Sep 2022 | 129