ZX Spectrum was pretty cool too

It is 60 years since the founding of Sinclair Radionics, a forerunner of Sinclair Research and responsible for some nifty calculators and a not-so-nifty watch.

The company was founded by Clive Sinclair, then a mere 20 years old, in July 1961. Its first product was the Sinclair Micro-amplifier for hi-fi systems, which was followed by the Sinclair Slimline radio kit.

During the course of the 1960s, the company released more amplifiers and ever smaller radios before launching its first electronic calculator in 1972, the Sinclair Executive. 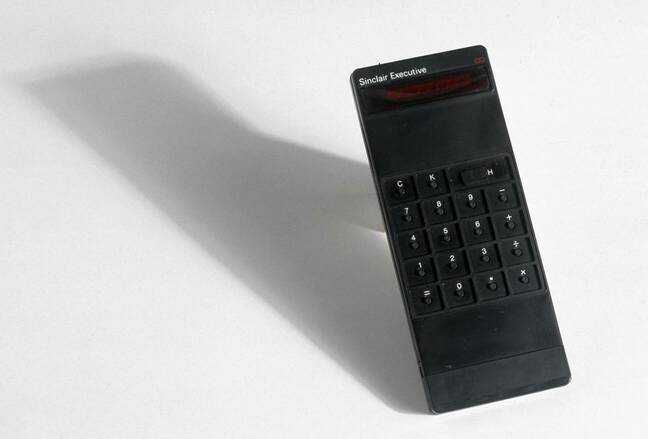 Compared to the competition, which normally needed mains power or a hefty set of batteries to run, the Executive was a slimline design. Calling the maths functions limited would be charitable, but clever power management meant the LEDs of the display did not drain the batteries quite so rapidly and, at a shade under £80, the plastic slab sold like hotcakes.

During the 1970s, Sinclair introduced other calculators. But it was the disastrous watch, with a display of red LEDs that only displayed when a user pressed the surface, that nearly did for the company. Not only was the kit version a challenge to assemble, but assembled units proved easy to break. Sadly, the batteries were no match for Sinclair's marketing, which boasted "it runs for up to a year on cheap batteries." It didn't.

Chris Owen's Planet Sinclair documents the woes of the watch which, as well as a 10-day life for the batteries, also included static sensitivity, malfunctioning control panels, and a timing crystal that ran at different speeds depending on the temperature.

The fiasco led to the UK's National Enterprise Board (NEB) stepping in and buying a stake in the company in 1976. As the 1970s wore on, Sinclair Radionics also had a crack at making a portable TV, which was ultimately unsuccessful, and began work on the NewBrain computer project. The NewBrain outlived Sinclair Radionics, which was shuttered in 1979, finally emerging in the 1980s as the Grundy NewBrain.

With Radionics bending to the will of the NEB, Sinclair Instrument arrived in 1975 with a wrist calculator. The company introduced the ZX80 computer in 1980 in kit and assembled forms before becoming Sinclair Research (via a number of company names) and producing the ZX81 and wildly successful ZX Spectrum in 1981 and 1982 respectively.

Sadly, it didn't last and the company's downfall was swift. Its next computer, the QL, was not as successful as its predecessor and Sinclair's C5 electric vehicle was a commercial disaster.

The Sinclair brand was eventually sold to Amstrad in 1986 but continues to attract interest today. If not always for the right reasons. ®