Following Torvalds' nudge, Paragon's NTFS driver for Linux is on track for kernel

Paragon Software, in response to a nudge from Linux Torvalds, said it will submit a pull request for its NTFS driver for Linux.

The process of submitting a read-write NTFS driver for Linux was initiated by Paragon nearly a year ago, when it ran into complaints that its 27,000 line patch was too big to review.

Paragon resubmitted the code in more manageable chunks, but its less than complete understanding of the Linux kernel development process apparently continued, with Torvalds stepping in last month to point out that it was not enough to post the code to the fsdevel list – at some point the code would actually have to be submitted as a pull request.

It is too late for version 5.14 of the kernel, for which rc4 has just been released, but potentially could be included in version 5.15.

Paragon has now responded: "Thanks for this clarification... this piece of information has not been really clear for us until now. We've just sent the 27th patch series which fixes to the buildability against current linux-next. And we'll need several days to prepare a proper pull request before sending it to you."

Torvalds welcomed the news, though he seemed just a little wary, considering perhaps the company's lack of familiarity with the Linux development process, in case Paragon was also unfamiliar with the licensing requirements. 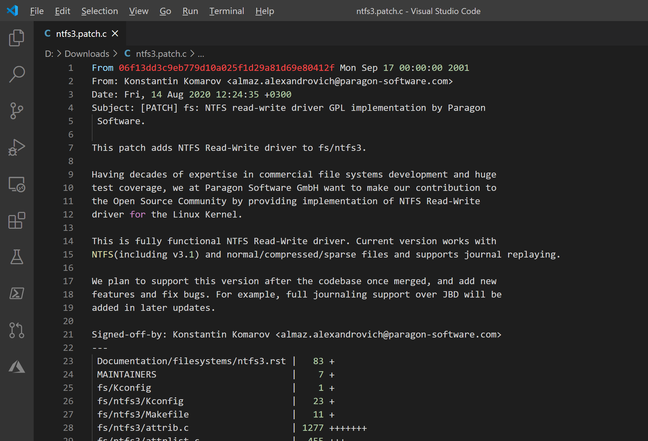 "The one other thing I do want when there's big new pieces like this being added is to ask you to make sure that everything is signed-off properly, and that there is no internal confusion about the GPLv2 inside Paragon, and that any legal people etc are all aware of this all and are on board. The last thing we want to see is some 'oops, we didn't mean to do this' brouhaha six months later," Torvalds said.

He also observed that no code would be pulled until the merge window for 5.15 opens, which he said is "about a month away." The merge window opens for just a couple of weeks, with the following six to ten weeks devoted to fixing problems.

As for 5.14, Torvalds said: "Nothing to see here, entirely normal rc4... mostly a very nice and flat diffstat."

If all goes according to plan, we can expect the Paragon NTFS driver to be in version 5.15 of the kernel for release towards the end of the year. ®