Most-used language? JavaScript, of course – though for a big salary, try Clojure

The technology section of the survey is where we may get clues about trends in programming languages and platforms. Perhaps the most dramatic chart in this survey concerns development environments, with Microsoft taking first and second place in terms of usage: 71.06 per cent of those polled use Visual Studio Code, and 33.03 per cent use Visual Studio. Third is Notepad++ with 29.1 per cent (note that most percentages in the survey sum to more than 100 per cent thanks to developers who use multiple tools). 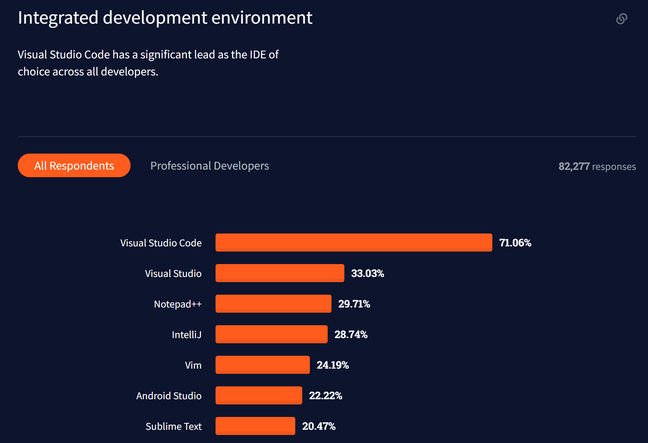 Stack Overflow did not ask this question last year, though in 2019 the same three held those spots albeit with much lower percentages: 50.7 per cent for VS Code, 31.5 per cent Visual Studio, and 30.5 per cent Notepad++. The remarkable ascent of VS Code is the big story here.

Other choices such as IntelliJ IDEA, Android Studio, and Eclipse show slight gains, though one of the oddities versus 2019 is that almost all the IDEs show higher percentages, which either means more developers using multiple IDEs, or perhaps something in the survey design made respondents more inclined to tick more boxes.

In programming languages, JavaScript remains the most used at 65 per cent, Python is up from 44.1 per cent in 2020 to 48.2 per cent this year, and Java down from 40.2 per cent to 35.35 per cent. We happily note that Stack Overflow keeps language usage and language popularity separate. You may love or hate the likes of Rust, Lisp, R, and assembly all you want, though you probably have to use JavaScript, Java, SQL, and C# day-to-day. Usage doesn't necessarily equal popularity.

What's the most dreaded language? COBOL (84.21 per cent apparently), beating out VBA at 79.39 per cent, though the COBOL figures, as you would expect, are from a small base of fewer than 450 developers.

It is notable how many programming languages are more dreaded than loved, including C++ (just), Java, PowerShell, PHP, C, Perl, and many more. Top of the "loved" chart are Rust, Clojure (among just 1,500 developers) and TypeScript. Why do Clojure developers like their language? It might be because they are, according to this survey, the best paid, commanding a median salary of $95,000, ahead of F# developers at $81,037.

In web frameworks, React.js has gained in usage (40.14 per cent up from 35.9 per cent last year) while classic ASP.NET, which runs on the now-legacy .NET Framework, has dropped from 21.9 per cent to 15.74 per cent); the modern ASP.NET Core with 18.1 per cent is also fractionally down in usage, but now ahead of its legacy cousin. One bit of good news for ASP.NET Core enthusiasts is that it is tied with Svelte as the "most loved" web framework. 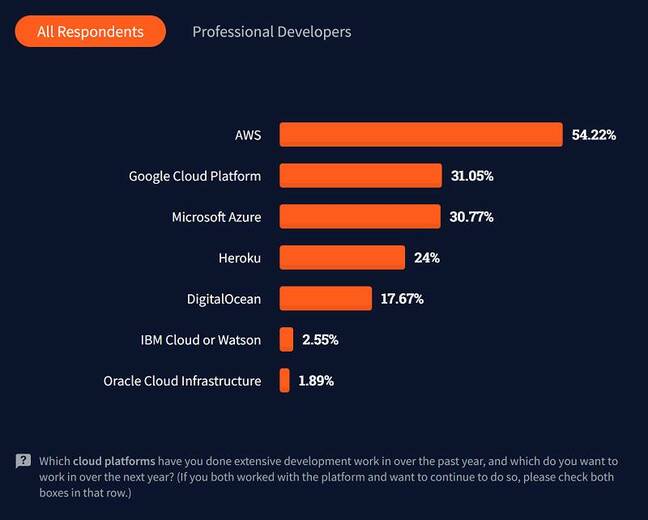 Google Cloud edged ahead of Azure for developer usage, despite its smaller market share

Stack Overflow broke out cloud platforms for the first time this year, and the results show an intriguing trend: among developers, Google Cloud Platform (GCP) with 31.05 per cent is slightly more used than Microsoft Azure (30.77 per cent), though both are behind AWS (54.22 per cent). The figures are tricky to compare directly, but in a broader 2020 question about platforms, Azure at 14.5 per cent was just ahead of GCP (14.1 per cent).

If the survey is narrowed to professional developers, Azure rises to the second spot. GCP gains the number two slot in a second question though, about platforms developers would like to switch to.

The key takeaway here is that GCP's popularity among developers (if this survey is to be believed) is greater than its market share. There is no contradiction here: Azure is not just a developer platform, but also an infrastructure platform; and it is also plausible that bigger enterprise accounts (with whom Microsoft has a strong relationship, as noted by Gartner analysts here) have a stronger preference for Azure over GCP than smaller developers – though again, note that AWS is well ahead of both.

Year of Linux on the developer desktop? While 25.32 per cent of surveyed programmers say they work primarily in Linux, that is down slightly from last year, which put the figure at 26.6 per cent. Windows is steady at 45.33 per cent, from 45.8 per cent, and macOS is also down, from 27.5 per cent to 25.19 per cent.

Unlike most percentages, these do sum to 100 per cent (or a bit less) since multiple responses were not allowed. The Windows share is actually bigger than it first appears: the survey added Windows Subsystem for Linux as an option, giving Microsoft a further 3.29 per cent. Professional developers though prefer the Mac (30.4 per cent) over Linux (25.17 per cent).

What do developers do when they get stuck? This is of course a Stack Overflow survey; but we learn that Google is their first thought (89.69 per cent) versus Stack Overflow itself at 79.96 per cent. These figures are similar whether or not developers are professionals.

The Stack Overflow survey was completed by 83,439 developers from 181 countries, making it the biggest of its kind, though it primarily represents the users of Stac kOverflow which may not be representative of developers in general. The pollsters also noted that "highly engaged users on Stack Overflow were more likely to notice the prompts to take the survey."

The full survey, with plenty more figures to mull over, can be found here.®